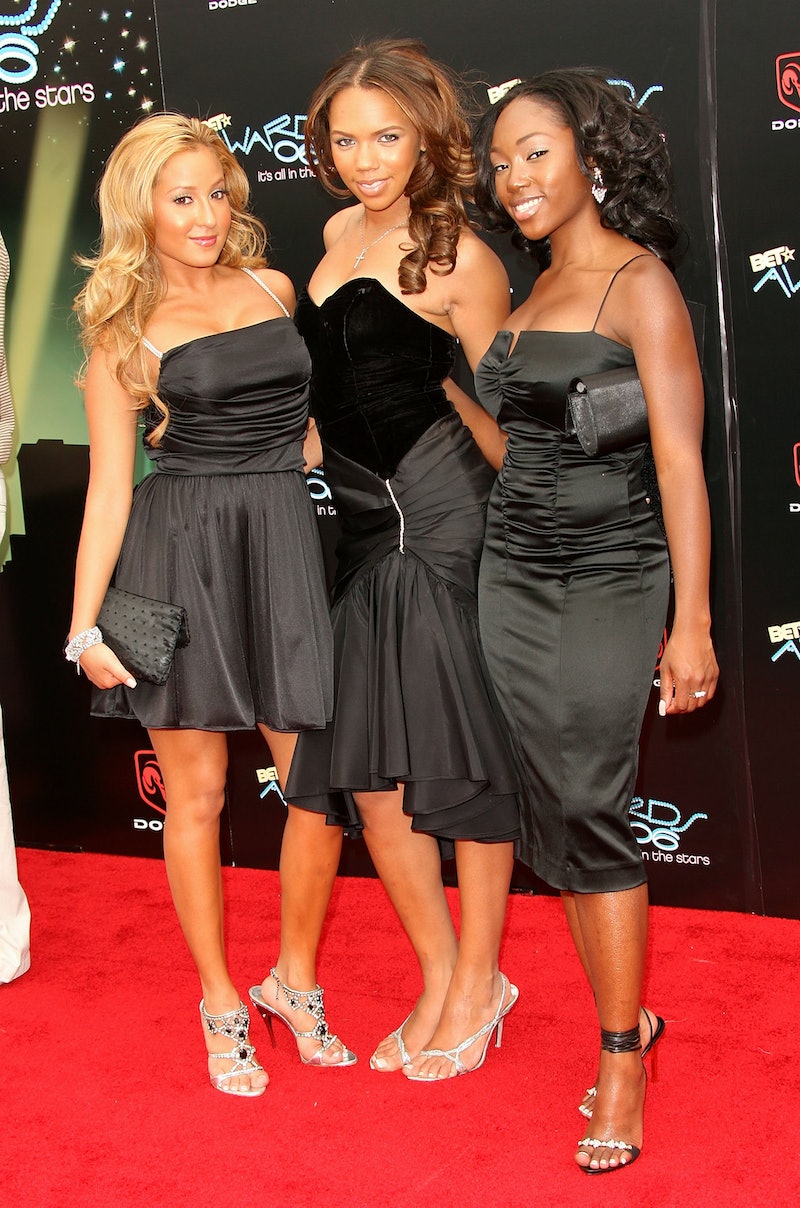 The three little women of 3LW are less little women than full-grown adults these days. Where on Earth did the time go? Pop cultural figures just grow up so fast. So what is 3LW up to today? One moment, Adrienne Bailon, Kiely Williams, and Naturi Naughton are bouncing around in the streets, rapping clean lyrics, and doing choreographed dances, and the next they're talking about vibrators on a daytime talk show. Well, isn't that just the circle of life? That is, if you kick one member off the squad, start a new group (The Cheetah Girls, duh), and throw in a Disney show in between.

I checked into the current goings-on of the members of 3LW in order to answer this burning question. After all, these ladies are bound to pop into your mind from time to time, just as “No More (Baby, I'ma Do Right)” inexplicably gets stuck in your head every six months. They’re kind of like those girls you went to high school with whom you wonder about periodically. Are they still in entertainment? Have they remained "cheetah girls, cheetah sisters?" Well, it looks like they don’t work together or talk much, but they are all very much on their own separate grinds.

Gone are the days of Bailon's cameos on KUWTK which we enjoyed when Bailon was dating Rob Kardashian. Last year, Bailon was in the Broadway production of The Little Mermaid, and she currently hosts a talk show with Loni Love, Tamera Mowry, Tamar Braxton, and Jeannie Mai called The Real. If I were pitching the concept to a network, I’d describe it as the Wendy Williams Show meets The View. You know, women talking frankly about Cosmo-style lady stuff, but with more “woot woot” sound effects. As the show’s name says, Bailon gets real on The Real. In the below clip, she reveals some sensitive information about a questionable tattoo of an ex’s name. *COUGH* Rob Kardashian *COUGH*

Ahh, Kiely, I've missed your contributions to society. Sadly, Williams' website hasn't been updated since before 2010, which was around the time she gave that divine sacrifice at the altar of awesomely bad music videos, "Spectacular." Williams did an interview back in 2012 with Madame Noire in which she revealed bits and pieces about what she's been up to. Basically, she's been consulting for other artists as a songwriter and creative director. And no, she hasn't really been talking to the other ladies of 3LW. Instead, she's been starring in films like Holla II — the kind of teen horror flicks we've been missing since 1999. Behold, the Cheetah sister all grown up:

While Bailon is doing the "talk show" thing and Williams is doing the "getting eviscerated in a slasher movie" thing, Naughton has been acting in television. Most of her roles are variations on the “lady of the night” or playboy bunny trope. Some of her gigs have included playing a Playboy Bunny on Mad Men, a Playboy Bunny on The Playboy Club, and one of Jennifer Love Hewitt’s coworkers on The Client List. Currently, she’s Tasha St. Patrick, “a drop-dead gorgeous, loving wife who wants it all”, on the 50-Cent-produced gritty crime drama Power. Most notably, Naughton got a big film role when she played Lil' Kim in 2009's Notorious. She also played Shadynasty on It's Always Sunny in Philadelphia which is pretty amazing. Sounds like she made up for being cut out of The Cheetah Girls.

It would appear that everything has worked out for the best though. After all is said and done, the members of this girl group grew into women and taught us plenty of life lessons. Always remember, players will play, haters will hate, but it's got nothing to do with me and you — that's the way it is.

More like this
You’ve Been Singing The Wrong Lyrics To “All I Want For Christmas Is You”
By Sam Ramsden
17 Photos Of The 'Wednesday' Cast Vs. The 1991 'Addams Family' Cast
By Grace Wehniainen
The 'Kenan & Kel' Reunion On 'SNL' Took A Dramatic Turn, Thanks To Keke Palmer
By Brad Witter
'The Holiday' Sequel Is Reportedly In The Works
By Sam Ramsden
Get Even More From Bustle — Sign Up For The Newsletter