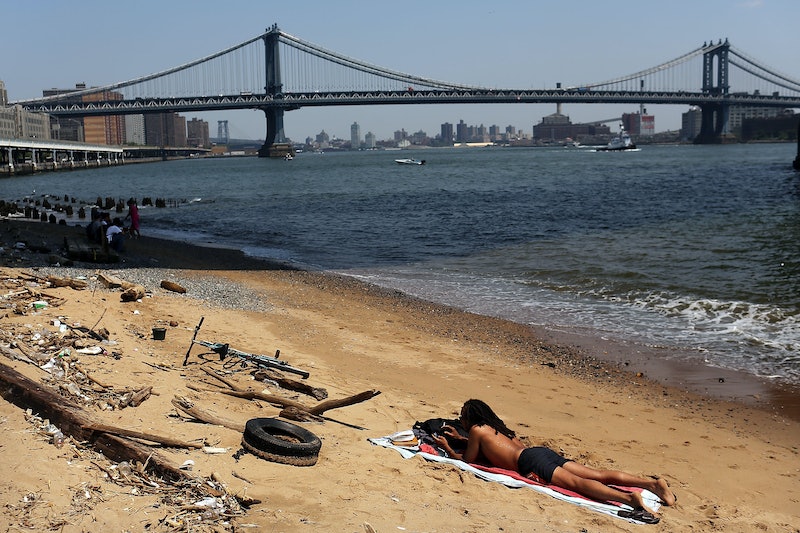 E.B. White once said there are three New Yorks: The New York found in commuters, natives, and settlers. But what the great writer failed to mention is the fourth New York — the city's summer smell. Yes, if you can make it here, you can make it anywhere (especially in the summer time).

Sure, those three glorious months of open hydrants and Mister Softee is enough to get anyone to throw on some celebratory short shorts, but as always with NYC — there's a catch. Any Big Apple resident can attest to the unmistakable odors hanging heavy in the dense city air, wafting through the subway grates.

Imagining the sweet scent of summer rain? Nope. That's just the questionable drip from an air conditioner above your head. Mix that with the olfactory goodness of delicious streetside halal, mounting piles of garbage simmering in the heat, and crowded subway cars, and you've got yourself a sweaty New York summer.

Don't let the bevy of aromas send you running to the Hamptons just yet — for every sardine-packed train ride spent rubbing up against the guy who could use a little deodorant, there are three weekend street fairs waiting with a melting pot of endless barbecue, burgers, and souvlaki. Here's what we put up with in exchange for the most magical summers on earth.

The city's distinct smell is tolerable enough in 30-degree weather, but jumping another 60-degrees in the summer and cranking up the steam underground is a foul recipe for disaster. Fifty percent perspiring bodies crammed in close quarters, 25 percent urine, and 25 percent miscellaneous sewer stink, it's enough to make you want to drive through Manhattan during rush hour.

There's really no way to get past this one. No matter which borough you live in, the hot garbage smell permeates through your very being. Regardless of how much perfume you spray, you'll always fear it sticking to your hair. City streets are incomplete without the sky-high piles of black trash bags filled with rotting food and fodder for your favorite rats. Take a big whiff, folks.

Loud music, red Solo cups, and the aroma of meat on the grill can shut down any neighborhood for a few hours of block partyin'. When the self-proclaimed local chef pulls out the apron, you know it's on. At least the smell of barbecue helps mask the garbage.

Cabs with no Air conditioning

Yellow cab drivers can be reckless (I've been in a cab with a guy driving with only his elbows — HIS ELBOWS), but high temperatures can make your ride even more dangerous than anticipated. Road rage only seems to increase with the warm weather, especially if your cabbie's air conditioning system is nowhere to be found. Your skin sticks to the leather seats coated in leftover sweat from previous passengers, and the stuffy scent of sweat and whatever your driver had for lunch lingers in the air. This is the luxurious transportation option.

If you've ever done hot yoga, you know the struggle of perfecting your downward-facing dog while attempting to breathe in the B.O. of your too-close-for-comfort neighbor. Now imagine hundreds of those neighbors, flexing and sweating in Times Square in simultaneous savasana. A little deodorant please?

Beware the empty train car. It can only mean two things: No air conditioning, or a homeless person is taking a nap inside. Often, in the summertime, it's both. Sad and smelly. Maybe you should have taken the bus.

Ah, wake up and smell the sulfur. There's nothing like walking to work in a cute dress only to have your legs and nostrils assaulted by the steam from a manhole. Combined with subway stink, this summer scent is a repeat offender.

You've got to give props to food vendors working in 100-degree weather, cooking in a tiny metal oven just to ensure we've got our 1 pm falafels or 1 am drunk snack. Nothing says home like the fragrance of candied Nuts4Nuts on every street corner or the smoky goodness drifting from the pretzel man's cart as you wait for the light to change. And don't even get me started on the seasoning and spices from that lamb over rice. In the heat, it can be a bit much — but we'll take it.

A good indicator of your location in the city is how close you are to the smell of horse poop. Seeing and smelling those little (or rather large) gifts from our four-legged friends is a sure sign of your proximity to Central Park, and a reminder of how far away you want to be. Hot horse poop? I don't think so.

Despite its reputation as a bustling metropolis, there are myriad animal scents in NYC. You can't go wrong with the food in Chinatown, but the pungent smell of raw fish hits you in the face the second you walk out those subway steps on Canal or Main Street.

If you don't know what they're called, you certainly know what they smell like. Ginkgo trees seemingly look harmless, but accidentally step on one of those little yellow bad boys and it's game over. They smell like vomit and their gunk spreads on the sidewalk faster than a bad rumor. Avoid at all costs.

Crowded Clubs at 2am

Whether it's a beer garden, nightclub, or lounge, it's sure to be packed on a summer night, filled with drunken guys and gals sweating all over each other and the likely chance of some upchuck. Lack of clothing does little to deter our bodily odors and once those doors open at closing time, it's like unlocking the floodgates of misty toilet water.

Sure, every major city has the smell of weed in the air come summertime. But how many can boast the weed-garbage combo? We're guessing this is a NYC novelty.

With millions of inhabitants in New York City, the sensory assault is only natural, but don't let it deter you from enjoying summer in the five boroughs — there are definitely some odor-free spots. Except for those ginkgos. They're everywhere.

At least we have Spring?