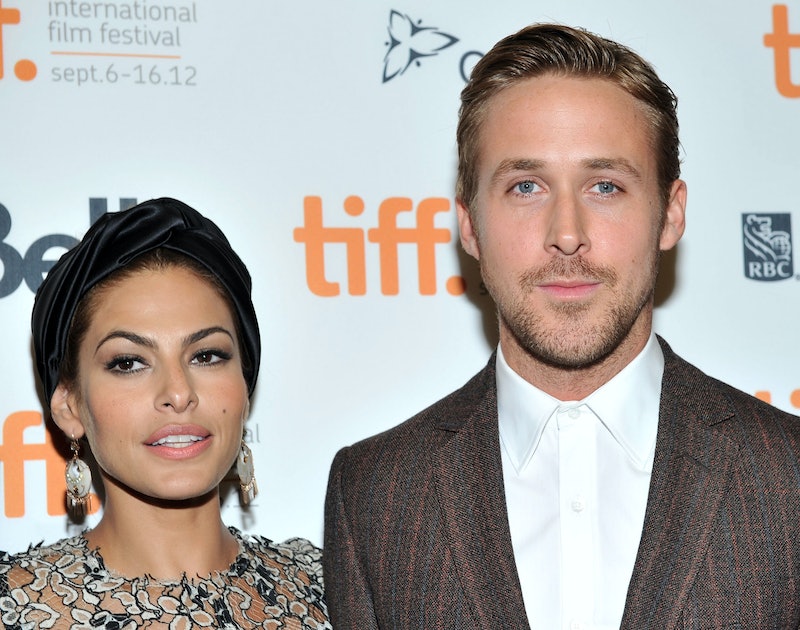 Just in case you needed another reason to be jealous of Eva Mendes, it appears that Ryan Gosling cooks for Eva Mendes as her personal chef while she's pregnant — although I'm sure he's hit the kitchen before that and will again afterward. The shockwave that was caused by the news that Eva Mendes is pregnant with Gosling's baby seems to have died down in favor of absolute fascination about the baby Gos and how Mendes managed to keep her pregnancy a secret from all of us for seven whole months. Still, the fact that he can cook and is willing to do so for his family is just one of many reasons Gosling is going to be a great father.

We've been so focused on the end of our delusional dreams that Gosling was going to dump Eva Mendes and come knocking on our doors looking for love that we lost sight of what's important: Ryan Gosling is going to make an adorable/hot/wonderful father. I wouldn't be surprised to see him start making lists of Fathers of the Year before Baby Gos is even born. The thing is, even though the baby has yet to be born, there are already things about Ryan Gosling that make it obvious that he's Father of the Year material even without seeing him in action yet.

I'm not saying that you should go so far as to start being jealous of the baby for getting to have Ryan Gosling as a father, but I'm still calling all of these facts as reasons Gosling is already winning the father competition.

Did we forget to mention the part where Eva Mendes has been pregnant for seven months and we had no idea? Do you know how hard it is for a celebrity to hide anything, let alone for half a year? And it's not as though Gosling hasn't made public appearances or done interviews or suspiciously disappeared in that time. He's just really good at keeping secrets, which means the Baby Gos can confide in him and feel safe.

The second blow after the baby bomb was realizing the new Gosling would mean that Ryan Gosling would quit acting. Why? Because in 2011, Gosling admitted that he didn't think he could take care of a baby and continue to have a film career at the same time. It's still rare enough in this society for the father to be the one to put his career on hold to take care of the baby that it speaks to what a great father Gosling is that he was willing to do so even before babies were a possibility.

As much as we hunger for celebrities to give us every single insight into their lives that they can, the fact still remains that as a celebrity child you do not want to grow up and be able to Google your own baby pictures. Just no. However, Ryan Gosling is an intensely private person who doesn't even want his own baby pictures on the Internet, so Baby Gos won't have to worry about his father tweeting them to the world.

4. He won't be overprotective.

If there's one thing that Ryan Gosling has always been known for, it's how respectful he is toward woman. Just take a look at the Feminist Ryan Gosling meme. The Overprotective Dad cliche comes with an innate sexism and double standard that makes it clear women are frail things to be protected and Gosling is so not about that life. He probably won't let Baby Gos out of the house without a bodyguard, but that's just being practical.

Ryan Gosling started out as a member of the Mickey Mouse Club and mentioned offhand in an interview that he's in a relationship with Disneyland, so if there's any father who will be able to marathon Disney movies for week without getting sick of them then Ryan Gosling is that father. He probably even knows the songs better than his kid will.

6. He'll raise you with the right values.

As another extension of the Feminist Ryan Gosling meme, not to mention his endless amounts of charity work, Ryan Gosling is definitely the sort of person who is going to make sure to raise his child with the right values. I wouldn't be surprised if Baby Gos ends up finding philanthropy to be the most fun extracurricular activity he or she can do with their time.

Ryan Gosling has a band, Dead Man's Bones, and a beautiful singing voice. Because it's not enough that he owns a restaurant and can be a personal chef, but he also has to be able to sing like an angel as well. He may be trying to kill all his fans with his perfection, but just the idea of Ryan Gosling singing "Rockabye Baby" while rocking Baby Gos to sleep should make the front of every magazine.

8. He'll keep his business out of the tabloids.

Did you know that Ryan Gosling has a Twitter? If you answered no, then don't worry about it. He hasn't touched the thing since April of 2013. Combined with the fact that Ryan Gosling and Rachel McAdams hated each other on set and none of us realized that until long after The Notebook came out and it's clear that Baby Gos will never have to read about Mom and Dad's relationship troubles in Star.

Ryan Gosling may already be a cool dad, but he's not going to try to be. This is the man who still doesn't believe his status as a sex symbol is actually a real thing, who laughed after frenching a pillow during an interview, and who pretends that fans' screaming makes him nervous enough to tremble when he picks up his water. The Gos won't be that father who tries too hard to be your friend and that will make him incredibly approachable. Are you swooning again yet?