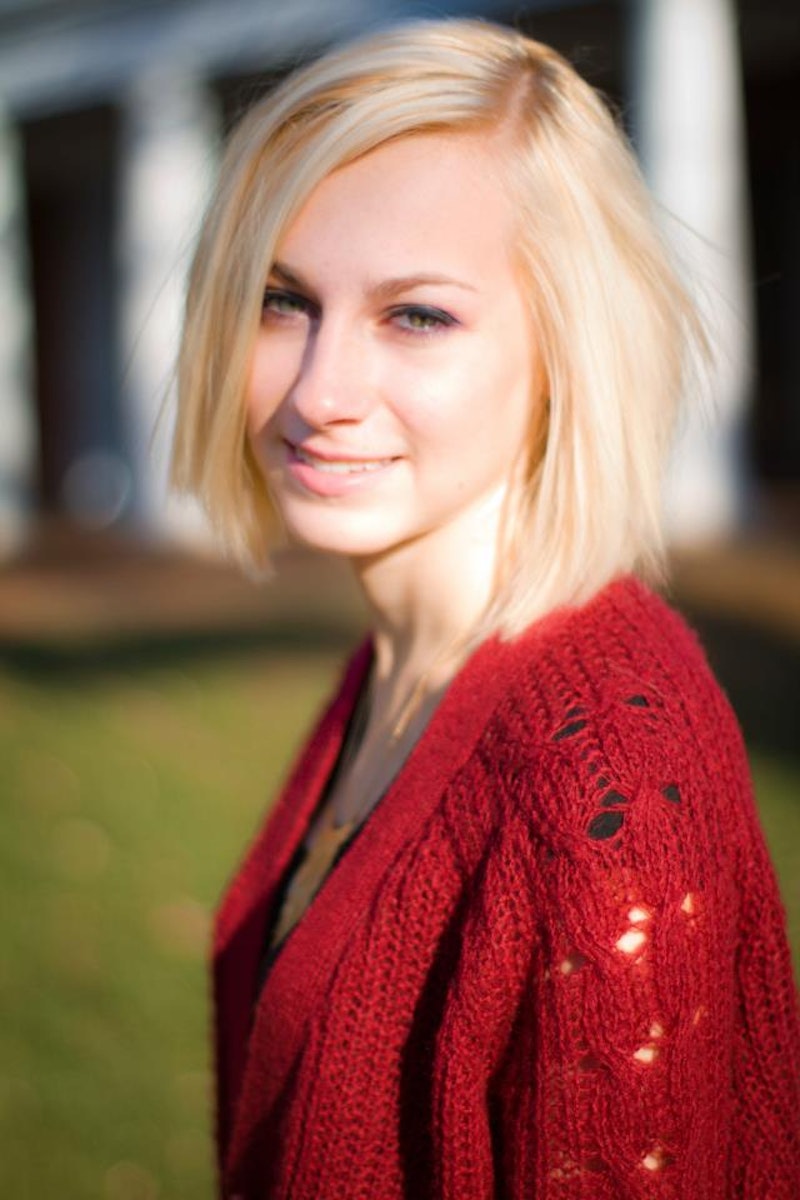 A month ago, I ended a serious relationship. This would not, I know, be hard-hitting news for most people. As I scrolled through news sites to find pitches for my Bustle articles — Israel Resumes Strike on Gaza as Ceasefire Fails, read one, while another was titled Issa Stands by Subpoena of Top White House Aide — I imagined this article next to them. College Student Breaks Up with Boyfriend, Few Care. Cue the world’s tiniest violin.

However, if I have learned anything from writing, it is that no (wo)man is an island. Articulating your experiences and having someone else respond with yes, I get it, I know what you mean is a type of catharsis that few other things in the world can offer. With that in mind, I thought I’d write about what it’s like to date someone with depression: to talk about the highs and lows, the beginning and the end.

Thomas (not his real name) and I met five years ago, when I was a high school sophomore and he was a freshman. Together, we acted in nearly every production our school’s drama club put on, from The Man Who Came to Dinner to Richard III. Our friendship was cemented when we were cast as Lysander and Hermia in A Midsummer Night’s Dream, Shakespeare’s madcap romp about fairies, Athenians, and mismatched couples. As some of theater’s most famous star-crossed lovers, we flirted, shouted, and stage-slapped each other with gleeful abandon. We were both dating other people, so we never allowed our on-stage romance to translate into anything else. At the end of my senior year, I went off to the University of Virginia, and he stayed in Richmond to finish high school. I expected our friendship to be shelved until Christmas break.

Except he began calling me late at night, calls that were mostly filled with the staticky hiss of the phone as he tried to figure out what to say. Something was seriously wrong, he told me. He couldn't crack jokes anymore. He couldn't connect to other people. He couldn't bring himself to care about things he’d previously loved. He hated his life. I told him that what he was describing was a classic case of depression and tried to get him to seek help. Over the course of my freshman year, as these calls got increasingly desperate, I often wondered how his girlfriend was able to deal with this. If I, as one of his good friends, worried constantly about his mental health, I couldn't imagine how she was able to handle the pressure.

I found out soon enough. They broke up in the spring of his senior year in high school, and Thomas and I began dating as soon as I came home for the summer. That summer was idyllic, mostly because I was leaving for a semester in Spain at the end of August and we wanted to savor the time we had together. Sometimes, sharp memories of the phone calls we’d had would bubble up in my mind, but I’d push them back down. I was making him happy. He seemed happy enough, at any rate. He was finally taking medication and had gone to a therapist a few times.

This didn't last for very long.

While I was in Spain, Thomas rarely told me what was wrong, but he would sometimes blurt out snippets of what was really going through his mind when we talked on the phone. He wasn't learning his lines for a student production of Macbeth — not because he wasn't trying, but because he couldn't. The words refused to stick. He didn't care about his classes. His medication made him sick, so he would go off it for weeks. He missed me.

Although I tried to get him to see a counselor at UVa’s psychological services, he skipped the appointments I did get him to make. I wrote him letters every week, each one exhorting him to get help. He never sent me a letter in reply. I found myself standing in vineyards in southern France, ignoring the fragrant smell of the dirt, worrying about whether Thomas was taking his medication. I watched flamenco in Granada on autopilot, hardly processing the click of the dancers’ heels on the floor, wondering who would call the EMTs if I weren’t there.

Every Shakespeare lover has a different interpretation of Hamlet’s “To be, or not to be” soliloquy:

To be, or not to be, that is the question— Whether 'tis Nobler in the mind to suffer The Slings and Arrows of outrageous Fortune, Or to take Arms against a Sea of troubles, And by opposing end them?

As the year progressed, my own interpretation began to take shape in my mind. It felt as if I were dating a kind of Hamlet: someone who would swing from lucid brilliance to taciturn, angry silence to utter panic. The way he lived felt, to me, like a kind of not-being. I wondered why Thomas would not take arms against his own sea of troubles, why he wouldn't go to a therapist, why he wouldn't go to a psychiatrist who could adjust his dosage. I knew that, logically speaking, Hamlet’s words had little to do with Thomas' predicament — Thomas was not suicidal, thankfully — but they kept echoing through my mind. Was it really nobler to suffer, if suffering meant going it alone? As someone who started seeing a therapist at age nine, the matter seemed simple to me. See a therapist, face your issues. Take arms against your sea of troubles, damn it.

When I came back from Spain, things got worse. He had more bad days than good days. “Bad days” meant that he wouldn't go to class, eat, or leave his room. They meant that he didn't want to see me. I would bring him a flower or a book to read, trying desperately to cheer him up and stave off his panic attacks. “You can’t help me,” he said at last. “Nothing you do helps.” I became terrified of setting him off, so much so that I started to see bad moods even when they weren't there.

My own health began to go downhill. Mysterious neck and shoulder pain led to several ER visits. The doctors shrugged and told me it was stress. This was joined by constant headaches and acid reflux that made eating difficult. I couldn't sleep, and I stopped focusing on my writing because it took so much effort. One night, during a student theater production I was performing in, I lost my nerve onstage — something that had never happened before. As the lights whirled around me, it took all my strength to keep myself from fainting.

When I found out that Thomas was in danger of failing the semester, I brought down an ultimatum: see a therapist, or we couldn’t be together. He promised he would. Then he told me he had. In mid-June, while we were on a date, he began panicking again. “Has your new therapist told you what to do when you panic?” I asked.

“I haven’t gone. I skipped my meetings.”

And then he said we were done, and that was it.

Dating someone with depression means watching him slip farther and farther away while feeling powerless to stop it. Hunching over a cup of cold tea, waiting for him to call and tell you he’s OK, and knowing that he’s not capable of that kind of communication. Trying to force terrible bargains, like saying you won’t go to class unless he calls a counselor. Wondering every day whether he’s taking his medication. Caring for him like you would a child, because you know he can’t do it himself, and he knows this too, and it makes him feel even more lost. Knowing that he will never have a meaningful relationship, with you or anyone else, until he chooses for himself the help you want so badly to make him want.

Not every relationship with a depressed partner is like this, but mine was. It was like swimming against a strong current. Some people can handle that without getting sucked under. I’m not one of them. I’m not saying that our love wasn't real, because it was, and sometimes it was great. Though he may have never sent me a letter in Spain, he did send me a copy of one of his favorite books: Terry Pratchett’s Small Gods. He drove all the way to JFK Airport from Virginia to pick me up, and kissed me even though I was a sweaty, crumpled wreck. He held my hand when my migraines struck. But he had become a Hamlet, not a spontaneous and loving Lysander.

And me? I was neither an Ophelia nor a Hermia. I didn't even know who I was after the relationship ended. And that is the ultimate challenge of loving someone with depression: not losing yourself in the vacuum of that person’s emotions. When we broke up, he told me, “I hope you’ll understand why I’m doing this someday.” Initially, I was furious at him for not caring enough to try harder, but as my acid reflux and headaches disappeared, I began to understand.

My advice to anyone who is experiencing something similar is short, but I mean it.

Rediscover yourself. Go out with strangers, just to make new friends, and stay in with old friends who will kiss your cheek and help you cry. Do yoga [(it makes you feel great)]. Read more. Take walks in unfamiliar parks. Realize that it is OK to take some time to feel shitty, cry, and binge-watch Orange is the New Black, because you have lots of years left to live and you are going to meet some amazing people. Travel. Call your mom. Buy a leather jacket that you don’t need, but which makes you look rakish and daring. You got along fine before that person, and you will get along fine without him — and he will eventually get along fine without you too. Ford your own sea of troubles on a slipshod raft made of wineglasses and new shoes, poetry books and pizza boxes. A raft you write into being, a raft you eventually take out and show to others. I, at least, will be there to say yes, I get it, I know what you mean.

N.B.: This article was written with Thomas' full permission.