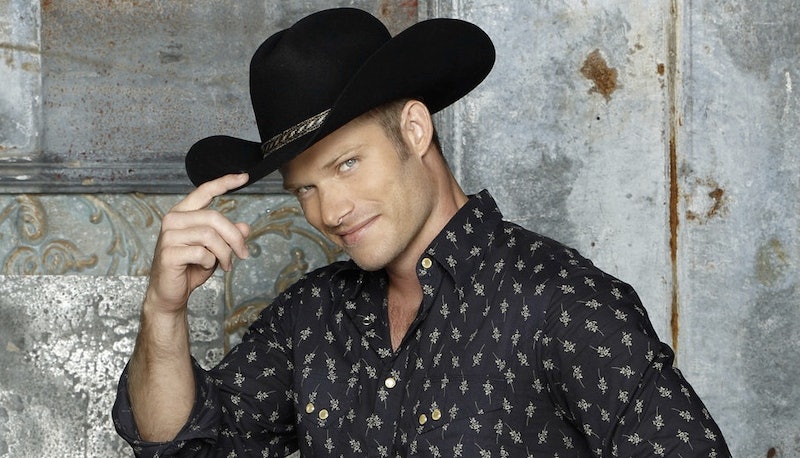 Fans of country music, Connie Britton, and/or soapy dramas, brace yourselves. Nashville 's third season will premiere on Wednesday, September 24th, and I have a feeling it's going to be a doozy for all of the characters, especially everyone's favorite soon-to-be outed gay country singer Will Lexington. After years of struggling with his sexuality, Will finally took the advice of his best friend in the Season 2 finale and told his wife, Layla, that he is gay. Unsurprisingly, she had no idea what to do with this information. But the worrisome part of their conversation is that what should have been an intimate reveal of his sexuality to his wife may be turned into a public outing for Will, thanks to hidden cameras from his and Layla's reality show. Uh oh.

At the moment fans can't be sure how this outing will affect Will or his career, but knowing Nashville, it probably won't result in a positive outcome. Will has kept his secret for such a long time partially because he believes his successful stage career will be in great jeopardy if the world were to find out he's gay. Does he have not have enough faith in the country music world? Or is he right? I'm also worried about something much more important than Will's career — what might happen to the man himself.

Instead of focusing on only the probable dreariness awaiting fans when Nashville returns, why not throw in some happy possibilties? I can't be the only one rooting for Will's success. Here's what might be ahead for Will, both good and bad.

There's a reason Will was worried about fans hearing about his sexuality. There are still people out there who are not okay with homosexuality, and it's certainly possible that Luke's fan base includes some — especially when you remember that this is a TV show that likes to take things to extremes. Even accepting fans could give Will flack for lying to Layla, not to mention how Layla herself might react. She doesn't exactly have a history of mature decision-making.

Happy Theory 1: The Public Embraces Will

Perhaps Luke is wrong that coming out would end his career and his fans are more accepting than he thought. Yes, Nashville is usually filled with over-the-top drama, but wouldn't it be great if for once, the writers decide to put a positive spin on Will's struggle?

Sad Theory 2: Jeff Fordham Drops Will From His Label

Listen, Jeff is a jerk, plain and simple. Knowing him, he'll probably fear sales of Will's singles going down and promptly fire him. After all, Jeff is the one who told Will to date Layla out in public for his reputation. But does Will really want to be working for a company that lost two of its biggest stars and is run by someone who doesn't believe in or respect him? Definitely not, but that doesn't mean it isn't going to sting if he loses his deal.

Happy Theory 2: Rayna Picks Will Up For Her Label

There is no way Rayna will let talent like Will's go to waste. She would never judge someone because of their sexuality, even in terms of business, because she knows how good Will is. I can't believe she wouldn't scoop him up and take him under her wing and label. Juliette also knows how talented Will, is thanks to him playing her tour for a while. She'd definitely put in a good word if Rayna was even a little hesitant about the idea. Juliette could probably even find a way to give Will a new persona. An openly gay country singer who is able to maintain a successful career and have storylines unrelated to his sexuality? That would be awesome to see on Nashville.

Sad Theory 3: Will Alienates Everyone

If everything does go poorly for Will, from no public support to losing his contract, there's a chance he'll return to the bad place fans have seen him in before. He's fallen into a deep depression and contemplated suicide before. Gunnar will always support Will even if no one else does, but can Will accept it if his life is crumbling around him? Probably not and that would lead to some really sad moments in Season 3.

Happy Theory 3: Will Gets More Support From Friends Than Ever

On the flip side, it's possible that all the people in Will's life come to support him during his forced outing and he realizes that not only is he loved, but he is respected for being true to himself. Maybe rather than using it to destroy Will's career and life in general, Nashville will let Will become proud of his sexuality. Wouldn't that be much better to see?