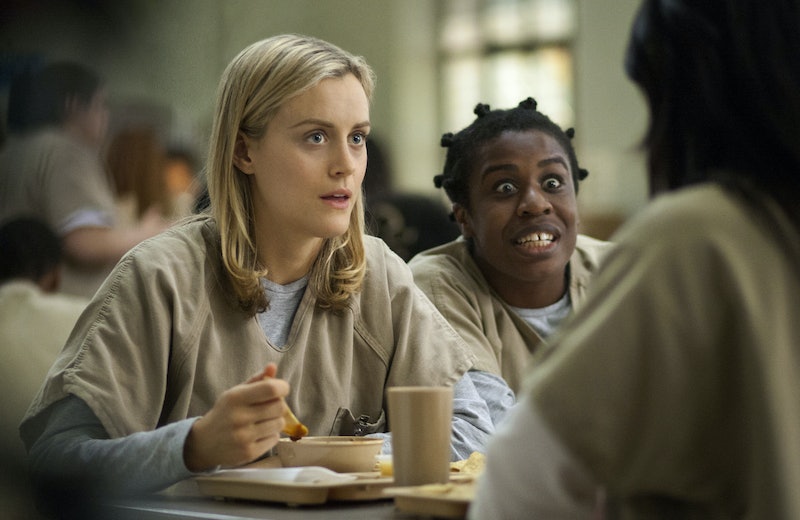 Anyone who's caught even the tiniest glimpse of the Emmy-nominated show Orange is the New Black knows that Litchfield Correctional Facility is a dump. The lights don't work, the correctional officers are nasty, the plumbing overflows, and the warden funnels money intended for the prison into her husband's political campaign. However, Piper Kerman —the author of the series and the woman on whom Piper Chapman is based — has been vocal about the fact that the reality of women's prisons across the U.S. is even darker than the show presents. In a new interview with Vox's Ezra Klein, Kerman speaks about how the U.S. justice system fails inmates and unincarcerated citizens alike.

Kerman spent 13 months at FCI Danbury, the real-life analogue of Litchfield. She now serves on the board of the Women's Prison Association and advocates for both women and men behind bars, so it's safe to say that she probably knows whereof she speaks. In the interview, Klein asks her questions such as: does the justice system disproportionately target communities of color? Does prison make the average citizen safer? How should prisons deal with mental health issues, since so many inmates require mental health services?

Kerman's answers reveal the myriad ways in which the prison system is utterly broken. To the question about race, she answers that prison is used as "a tool of control for poor communities of color...[it is] perhaps one of the most deeply distressing and morally repugnant realities of the last 30 years." To the question about safety, Kerman replies that rates of violent index crimes that the justice system is most worried about have declined worldwide, so the U.S. prison system can't take credit for that. And to Klein's question about mental health, she responds that the three largest mental health centers in the country are in prisons, and that funneling resources into the public health system would be a better alternative. "I can tell you from personal experience," she says, "putting mentally ill people in prison and jail does not make them better. It makes them less healthy."

Vox also has a slideshow of very helpful prison facts, such as the difference between jail and prison, the definition of recidivism (committing another crime after already having been incarcerated), and descriptions of probation and parole practices. Brushing up on your prison knowledge is probably a good idea, since with 2.2 million people doing time, the U.S. has the highest incarceration rate in the world.

Although OITNB is doing a phenomenal job at bringing attention to what it's really like to wake up and go to sleep in a prison, it can't, by nature, address every single issue. Prison overcrowding, the cost of incarceration per person, the lack of adequate educational/health resources for inmates, and the fight for improvements to the justice system are just a few of the problems that the show doesn't illuminate. Luckily, activists like Kerman are fighting for inmates' rights, but given the total wreck of the system, that might not be enough.

For more information on the American criminal justice system, check out this article about the lives of former inmates.

More like this
These Artists Are Reimagining Black History Month To Create A Better Future
By Katie Mitchell
25 Inspiring Quotes From Black Women To Celebrate Black History Month
By Kyli Rodriguez-Cayro and JR Thorpe
This First Look At 'The Gold' Shows Jack Lowden In A Whole New Light
By El Hunt and Sam Ramsden
'Brookside' Is Coming Back & Soap Opera Fans Are Going Wild
By Sam Ramsden
Get Even More From Bustle — Sign Up For The Newsletter
From hair trends to relationship advice, our daily newsletter has everything you need to sound like a person who’s on TikTok, even if you aren’t.