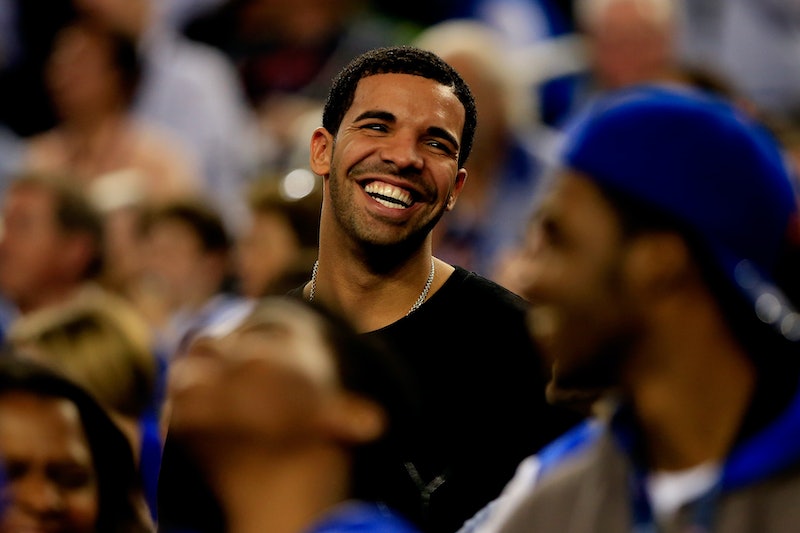 If you take a glance at past ESPY Awards hosts, you'll see that the divisive sports awards show has pretty much been hosted by American actor after American actor for the last 17 years. Of course, there have been slight deviations with Matthew Perry in 2005 (a Canadian-American actor), Justin Timberlake in 2008 (an American pop singer), and LeBron James (an American all-star athlete) but what could cause ESPN to throw caution to the wind and go with Canadian rapper Drake, at Wednesday's 2014 Awards? Were Jimmy Kimmel, Tony Danza, or John Goodman all unavailable for a repeat performance? I think not. ESPN called on Drake because he's funny, thoughtful, confident, has a killer smolder, and the guy likes sports. Shockingly, the last four are just as important as the first.

Damn, I swear sports and music are so synonymous/Cause we want to be them, and they want to be us

It's possible that Drake got the gig on the above verse from "Thank Me Now" alone. Drake gets that sports are cool...but he also gets that he's cool, and he's not afraid to recognize it. Perhaps that's why Drake was named a "global ambassador" (yes, seriously) to the Toronto Raptors last year, helping them on a team redesign, and launching their clothing line. See, he's very sporty. But the ESPYs aren't just about liking sports, they're about celebrating the player and the game, both of which Drake knows a little something about. If for its host's positive attitude alone, Wednesday night's ESPY's are going to be a home run — sports puns are fun!

When Drake found out about his hosting gig, he took straight to Twitter with an altered version of his Nothing Was the Same album cover, replacing his precious baby profile with an ESPY trophy. I like to imagine him sitting in front of Photoshop, making the meticulous edits himself.

In anticipation of the ESPYs, Drake told reporters, “Our goal is obviously, the night of the ESPYs, to completely take over the Internet, for everything that we do to go viral, and for people to enjoy days or weeks afterward." Hearing how excited Drake is for the Awards gets me excited...the guy gets it, which is probably why ESPN wanted to work with him in the first place: "We've been working hard, like I said, on the pre-tapes and on the monologue and on every aspect of the show just to make sure that it lives on past this night, which I can 100 percent guarantee it will.” #thatdrizzyguaranteetho

He'll have the monologue on lock

Drake's SNL performance this January proved that he was a funny and capable actor, sure, but what it really proved is that guy is committed. He was the star of every skit he was in, because he had done his homework and had full command of the stage and the audience — a helpful trick to have up your sleeve when hosting award shows, which are world-renowned as pretty boring, often clumsy affairs.

We can only hope that the ESPY skits come with a few impressions this year, because Drake can handle it. Check out his impression of Lil Wayne doing a Steve Erkel impression...that's some Inception stuff.

He can handle a dramatic moment

Drake proved he was funny on SNL, and by generally being a cool, laid-back guy on talk shows, etc., but we've all known for years that he had those dramatic Degrassi chops. Expect the anticipation to be palpable as the big awards start rolling out (Best Bowler, obviously).

He can console all the losers

Of course, Canada's Most Sensitive Rapper will be on hand for a hug and a good cry backstage.

If you still have your doubts...

Just watch So You Think You Can Dance instead.

More like this
Selena Gomez Explained Why A Past Album Cover Made Her Feel “Really Ashamed”
By Grace Wehniainen
Drake’s Net Worth Will Have Critics Saying “Honestly, Nevermind”
By Hugh McIntyre
Prince William Reveals Charlotte's Hidden Talent In Ultimate Proud Dad Moment
By El Hunt
Olivia Rodrigo’s Song Dedication To 5 SCOTUS Justices Sent A Strong Message
By Grace Wehniainen
Get Even More From Bustle — Sign Up For The Newsletter