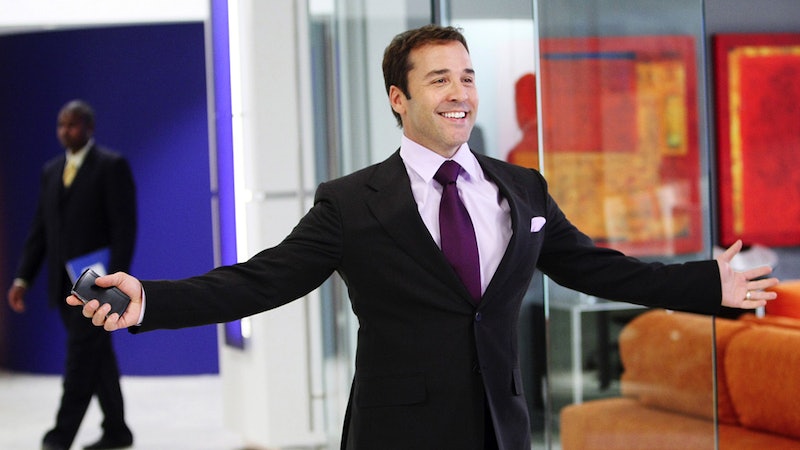 It's time to get out the cars and the crew, because Entourage turns 10 this week. Although some may remember the bro-love of the series, with its "hug it out, bitch," motto, I will choose to celebrate with a little Ari-time. Ari Gold is one of the angriest, sweatiest executives in all of television, and the actor who brought him to life is equally notorious. Jeremy Piven has always been the consummate bachelor, whose loud-mouthed nightly activities have fueled gossip blogs for over a decade. Even though he has seemed to calm down recently, with his British period drama and his new hipster mustache, Jeremy still says things that get him in trouble. Try to distinguish between quotes from the fake-asshat Ari Gold and the bonified, real-life douchebag Jeremy Piven. They're often difficult to tell apart.

"Call me Helen Keller because I’m a fucking miracle worker!"

The Verdict: Ari all the way. Ari's predilection for offensive comparisons (often involving his signature placement of "fucking") is well-documented. Ari doesn't get any props for this one, though, since Helen Keller humor is well past its sell-by date, and it wasn't even funny back when Entourage was still on the air. If you thought this one was hard, you might want to stop while you're not too far behind.

The Verdict: This is obviously Jeremy Piven, but his Cumber-hate is too much to ignore. WHY WOULD YOU PICK ON SOMEONE SO LOVELY.

"It’s like high school. You can’t fuck the prom queen until she finds out her best friend jerked you off underneath the bleachers!"

The Verdict: Ari's done it again. Although his obscene metaphors for Hollywood life have been crazier than this one, the juxtaposition of quaint high school setting and social climbing always gets me.

The Verdict: Even though this seems like an Ari Gold negotiation tactic, it's Jeremy all the way. He said this while being interviewed on The Jonathan Ross Show across the pond. Jonathan made fun of Jeremy's drumming, and Jeremy countered by threatening to drum solo (with all the best drummers), and forcing Jonathan listen. Oh, and he threatened to circumcize Justin Bieber. Good stuff.

"You need another job. You have potential as a human being … Seriously, can you focus on other things?"

The Verdict: This is one of Jeremy's most famous diatribes. When asked by Access Hollywood's Billy Bush about celebrity children, Jeremy fired this back, along with more red carpet vitriol. He has long had trouble with the paparazzi, and this incident was during one of his more vulnerable public-image moments.

"My assistant is to be gang-raped by a gang of one."

More like this
Elizabeth Debicki On Her Approach To The Most Debated Scene From 'The Crown'
By Grace Wehniainen
The First Trailer For 'That '90s Show' Includes So Many Nods To The Original Series
By Jack Irvin, Alyssa Lapid and Grace Wehniainen
Matt Smith Proves He's Daddy Daemon In This Viral 'House Of The Dragon' Video
By Marina Watts
Kate Winslet Spoke Candidly About Filming A TV Series With Her Daughter
By Sabah Hussain and Sam Ramsden
Get Even More From Bustle — Sign Up For The Newsletter