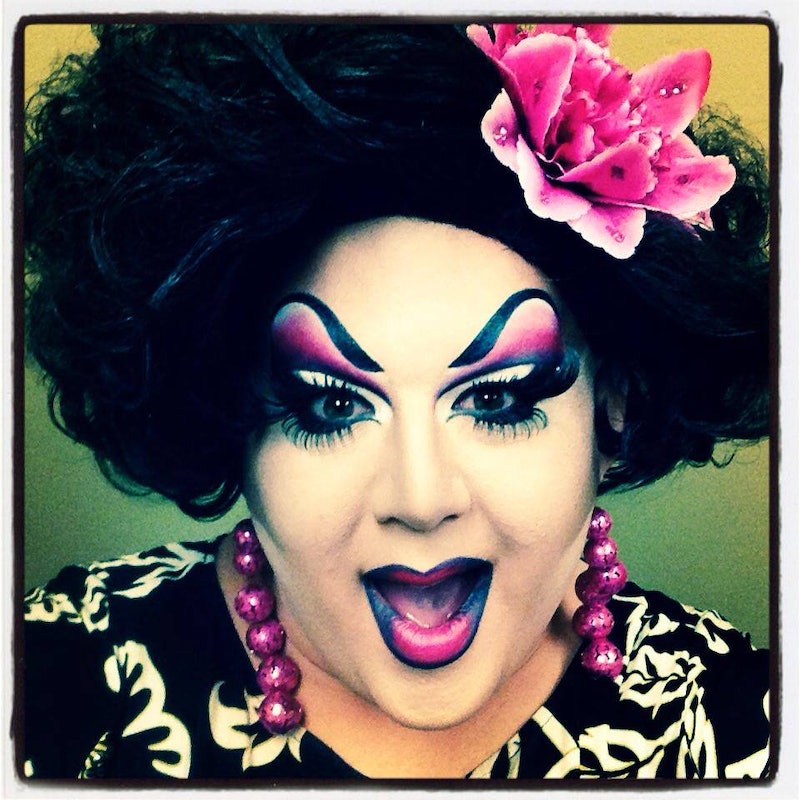 If you've ever been to a pride festival before, you know that huddled amongst the abundant rainbows, balloons, and free condoms are often anti-gay groups, holding signs like "Homo Sex is a Sin" and the always clever "Adam and Eve, Not Adam and Steve." Predictably, that happened at the Seattle 2014 Pride Parade: a Christian, anti-gay group picketed the event, shouting out slogans on a megaphone. But the reaction was anything but predictable. Mama Tits, a local drag queen, decided she was not going to put up with that kind of crap and took the haters down with a sassy, eloquent comeback.

"If they followed all the teachings of this book they use to hate, they themselves [would be] sinners!" Mama Tits shouts into her own megaphone in the video. "Would you kill your daughters if they had sex out of wedlock? Do you sleep with your wife if [it's] that time of the month? You're not even supposed to share the bed with her! Should we stone you for that?" In her glitzy, blue dress, cotton candy-like wig, and enormous rainbow covering her chest, Mama Tits towers over the hate group in front of her. (You can see them shrink up awkwardly, as if they're snails that someone poured salt onto.) When she's done talking, she whips around, struts back to the Pride stage, and lets out one more killer line: "Not today, Satan!"

According to Seattle Weekly, Mama Tits is something of a mainstay for Seattle Pride Fest, as she's been hosting for five years in a row. When the Seattle Weekly's Kelton Sears asked her what gets better with age, she replied,

"I like to think a fine wine gets better with age, a handsome man, or gorgeous woman. Seriously, though, the best thing that gets better with age is our fight for equality! Since the birth of the queer-rights movement when Sylvia Rivera threw that first brick at Stonewall all the way to today, it amazes me the leaps and bounds we have made as a community and as a human race for equality, not only for queer rights but for people as a whole."

Dang, girl, I couldn't have said it better myself. Please keep on doing your flamboyant, take-no-prisoners thing. (If you want more of Mama, you're in luck — you can sip mimosas with her or listen to her new single, "Bad Girls.")

Pride celebrations across the country, and gay rights as a movement, have had some awesome moments this year. Burger King debuted its Proud Whopper, while Harvey Milk has his own stamp and 19 states allow gay marriage. It's people like Mama Tits who are pushing the movement forward.