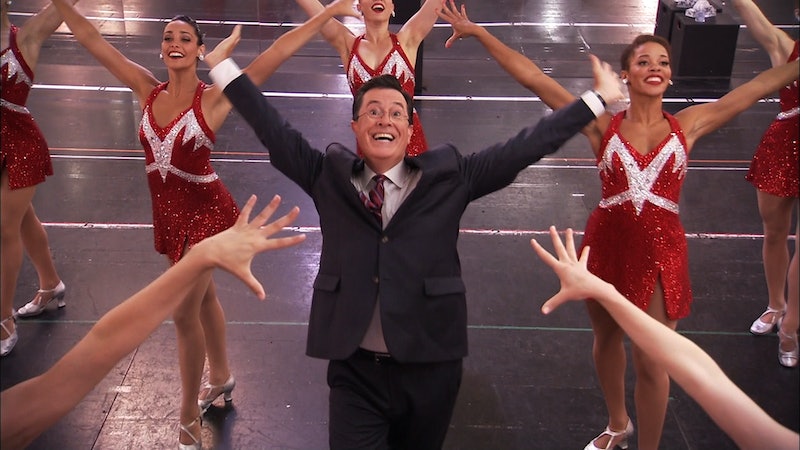 August is certainly a hot month for network feuds. Not only has CBS and Time Warner Cable been locked in a battle over subscription feeds — leading to a CBS blackout for all customers of the cable provider — but a miscommunication at Viacom has Stephen Colbert crying foul over the company that owns Comedy Central, MTV, and more.

On Tuesday night's Colbert Report, the host disappointed audience members and viewers when he told them that electronic music duo Daft Punk would not be appearing on his show as scheduled, a fact that "nobody told me until 2 o'clock yesterday," said Colbert. The reason? MTV President Van Toffler claimed the network had exclusive rights to Daft Punk appearances prior to the Video Music Awards, which airs Aug. 25. Or, as Toffler said in an email to Colbert, "Checked with my peeps ... and they're feeling funky on this one."

But Colbert was certainly feeling funky, and thank god, for Colbert Report audiences. Not only was the segment ripping into MTV biting, but we were treated to a star-studded "Get Lucky" dance number that far exceeded anything Daft Punk would have delivered us. So it seems, with Daft Punk's cancellation, we actually got lucky.

Watch both segments below, and marvel over how, in a 24 hour period, Colbert managed to get participation from Ashton Kutcher, Hugh Laurie, Jeff Bridges, Matt Damon, Jimmy Fallon, Jon Stewart, The X Factor, the Rockettes, Henry Kissinger, and, of course, Bryan Cranston on roller skates. Take that, Video Music Awards.

More like this
Zayn Malik Just Revived One Direction With Their Most Romantic Song
By Maxine Harrison
The 'House Of The Dragon' Showrunners Revealed One Key Similarity With 'GoT'
By Grace Wehniainen and Kadin Burnett
Here’s How 'House Of The Dragon' Diverges From The Book’s Timeline
By Allyson Johnson
Everything To Know About 'And Just Like That...' Season 2
By Jack Irvin
Get Even More From Bustle — Sign Up For The Newsletter