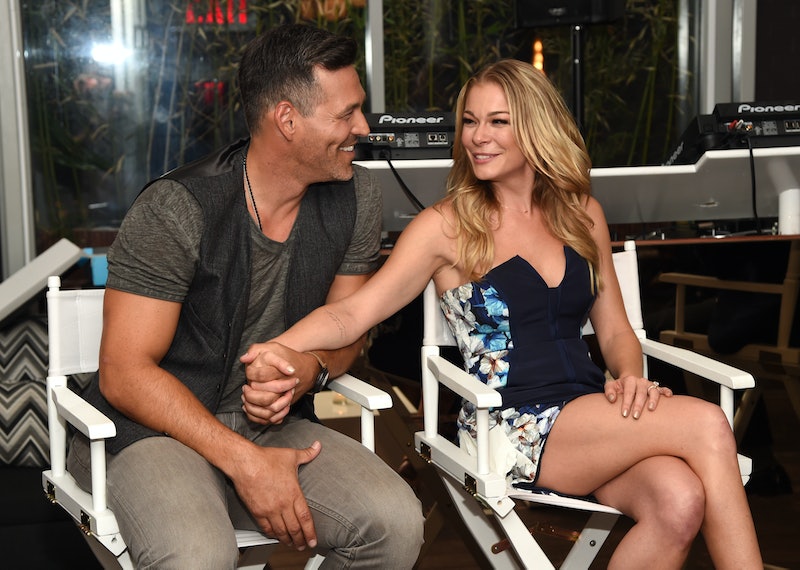 LeAnn Rimes-Cibrian and Eddie Cibrian acknowledge that they're catnip for paparazzi. In fact, they decided to do a reality show together — LeAnn & Eddie , which premieres at 10:30 pm on VH1 — in part to try and reclaim their public image from the tabloids. During the 2014 Summer TCA Press Tour, Rimes told the press, "We wanted to take our life back and have fun with our story and where we are now."

But you can't blame the gossip sites for being interested, considering the salacious details of their courtship. They were both married — she to dancer/foodie/blogger Dean Sheremet, he to The Real Housewives of Beverly Hills star Brandi Glanville, the mother of his two children — when they met on the set of a made-for-TV movie called Northern Lights. They fell in love, had an affair, and left their spouses for each other. Turmoil and shade-throwing ensued, and continues to this day.

What fewer people talk about, though, is what Lifetime movie caused all the upheval in the first place — the behind-the-scenes drama has thoroughly overshadowed what happened on screen: Northern Lights , which premiered on Lifetime way back in March 2009. Befitting such a roller-coaster romance, the movie was based on a novel by Nora Roberts.

Looks pretty cheesetastic, doesn't it? In case you couldn't divine the plot from the trailer, the movie is about Nate Burns (Cibrian), a Baltimore policeman who takes achief of police position in a town called — get this — Lunacy, Alaska. (It is not a real town.) He meets Meg Galligan (Rimes), a young pilot. They both have demons in their past, and the whole thing gets a little more complicated when Nate starts investigating the murder of Meg's father, whose frozen body turned up in a remote mountain cave. And yet, in the middle of the soul-searching and murder investigating, romance blossoms, inviting lines like this one from Meg.

"Now that we've run out of things to say, do you want to have sex? You know, hot, wet, forget-all-of-our-problems sex. It's basic, it's primal, and it's low in fat."

Is it worth watching? Depends on how much affinity — or tolerance — you have for the romance genre. The movie inspired one Entertainment Weekly critic to write, "My jaw dropped a few times at all the innuendo combined with an I-could-have-solved-that-in-my-sleep murder mystery. Still there was chemistry present in the two-hour movie — even if it was mostly between Cibrian and Meg’s dog." Ouch. Perhaps the lack of chemistry between Cibrian and Rimes was really just to throw their spouses off the scent of their affair.

But it doesn't matter if the critics liked Northern Lights or not — the movie got big ratings. More than 4.5 million viewers tuned in to the premiere. If Rimes and Cibrian can get all those people to watch the debut of LeAnn & Eddie, they'll be sitting pretty at their network. The third-season premiere of Love and Hip-Hop: Atlanta, one of VH1's most successful shows, had a little more than 3.8 million viewers (though the number jumps to 5.6 million people when viewers for an encore presentation are added in). If they can beat Love and Hip-Hop's numbers, they’ll finally generate a different kind of headline.