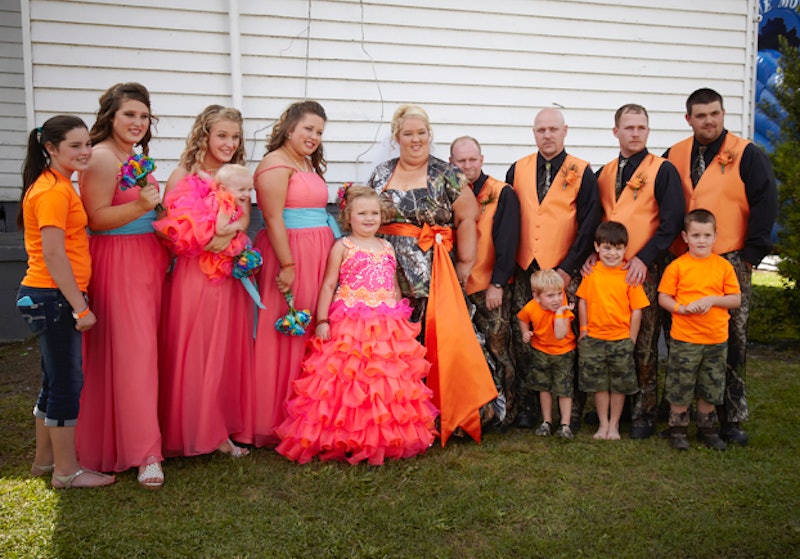 Romeo and Juliet, Snow White and Prince Charming, Ross and Rachel from Friends: All timeless love stories, but no romance was ever so legendary as the one that Here Comes Honey Boo Boo 's Mama June and Sugar Bear share. Scoff as we might at the thought of living la vida Boo Boo, you have to redneckognize that their relationship is nothing short of bliss. Is there anything any of us want more than someone who will love us as we are, farts, forklift foot, and all? If you can't handle me at my Mama June, you sure as hell don't deserve me at my Beyonce.

From the 'Sketti dinners to the incessant crop dusting, and the occasionally obnoxious couponing, Sugar Bear has loved June through it all — and he loves and cares for her all of her girls as if they were his own. But perfect relationships don't just fall out of the sky, and Sugie and June had to work to create their particular love story. So how did they get to be the stable, loving, and way too comfortable couple that we know them as today? Here's a timeline of June and Sugar Bear's relationship, from their first "date" to the day they said "I do."

Since theirs is an unconventional love, it's only fitting that it began in an unconventional way: In an online chat room. As legend has it, Mama June and Sugar Bear chatted only a few hours before June invited him over... and yes, by June's own admission, it was, in fact, a booty call.

I'm not going to go into how badly this could have turned out — I mean, Sugar Bear could've totally been a Catfish —but instead, I'll focus on the silver lining. Instead of a one night stand, what really happened was the beginning of a lifelong romance. Sugar Bear says it was "love at first sight." Mama June says no way — Sugie just wasn't her type. But, because her "biggest turn on is someone who's all about kids," they fell in love against all odds anyway. Sigh.

Just a year after their first meeting, June and Sugar Bear welcomed their daughter — and the reason I get up in the morning — into the world on August 28, 2005. And although she's Sugar Bear's only biological daughter, he says he "considers all the girls my daughters." Yep, this man is definitely husband material. Nice catch, June!

Many years later, Sugar Bear finally decided to go down on one knee and propose to June in front of the girls, an entire TLC camera crew, and all of America to ask June to be his wife.

"The girls need a father figure that's gonna be around for awhile," Sugie said. "It would be a great, extreme honor — um, will you marry me and be my wife?"

And obvs, she said yes. Okay, so he's a man of few words, but who could deny how genuine his proposal was?

The Thompsons-to-be donned their best camo to exchange vows and commit to each other for life, and while I was inwardly weeping at the monstrosity of a wedding dress June was wearing, I was outwardly weeping over the fact that these soulmates were getting the chance to spend their lives together.

Sugar Bear and June: Making us all believe in true love since 2004. Feeling single? Hit up a chat room — you never know where it could take you.