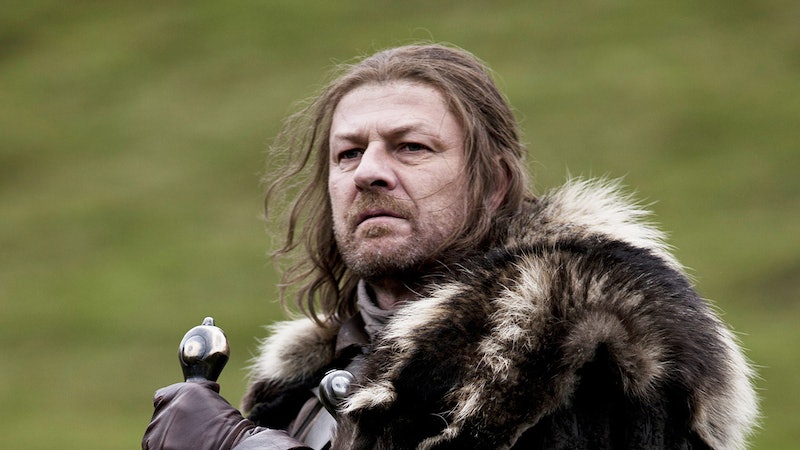 Well, this can't be a coincidence. Everyone's favorite onscreen dead guy, Sean Bean, confirmed something every Game of Thrones fan has suspected all along on Thursday — even if it hasn't been written by George R.R. Martin yet. Where Jon Snow knows nothing, the Internet knows absolutely everything. Earlier this week, a GoT theory about Jon Snow's real parents went viral and now, in an interview with Vulture, Bean confirms that Ned Stark is "obviously not" Jon Snow's dad. Boom.

This isn't necessarily surprising — Game of Thrones fans of both the book and the HBO series have noticed and pretty much accepted that there's something weird about Lord Eddard Stark's claim to paternity over Jon Snow. Heck, even Catelyn Stark didn't believe it. But it just seems like too much of a coincidence for Bean to straight-up confirm all of our suspicions now, immediately following the surge of conspiracy theories about Jon Snow's parents. Unless he really is trying to force HBO and George R.R. Martin (who, again, still hasn't written about who Jon Snow's parents really are) into letting him step back into Ned Stark's shoes to star in some flashbacks, courtesy of Bran Stark, in Season 5.

Vulture tweeted this quote from Bean's interview about his new TNT series Legends on Thursday afternoon:

I mean, obviously Ned's unfinished business is revealing who Jon's real parents are, right? And to finally tell us whether or not he's the son of Lyanna and Rhaegar Targaryen, making him a rightful heir to the Iron Throne. While this quote is a huge deal, taken in the context of the rest of Bean's comments about the show, it kind of sounds like he's messing with us and HBO.

Vulture writer Jennifer Vineyard, mentioned to Bean that she had a theory that Season 5 could use some Bran flashbacks and the actor was thoroughly surprised to learn that. He then dropped the Jon Snow paternity bomb before continuing, excitedly, that it'd be "great fun" to come back to GoT.

Bean ended the interview by telling Vineyard, "You never know what those guys are going to do with that. It's got to be something special. But I'm into that. I certainly would be into that. Print that! Give them a nudge. [Laughs.] Hopefully I'll get a call soon."

Now, selfishly, because I'm a Sean Bean-lover, I'd prefer to think that he's a stand-up guy and he's not running around, throwing out empty semi-spoilers for Game of Thrones. I mean, he's Ned Stark for christ's sake, a man of honor. But I can't help but feel like Bean's confession is caught between Lena Headey's Instagram semi-spoiler about Lady Stoneheart and Michelle Fairley's claim that there would be no Lady Stoneheart on GoT.

Is Bean being blatantly, unapologetically honest in hopes to squeeze a few more scenes out of Ned? (Who could blame him really? I would be ecstatic if GoT brought him back for even a second.) Or could he be leading us in the completely wrong direction, in hopes that it'll throw everyone off the scent of the "Lyanna and Rhaegar are Jon's parents" train we've been riding for years? Hopefully neither and he just cares about us and Jon Snow and wants us all to finally know the truth because yes, Sean Bean, that does need to be revealed at some point.