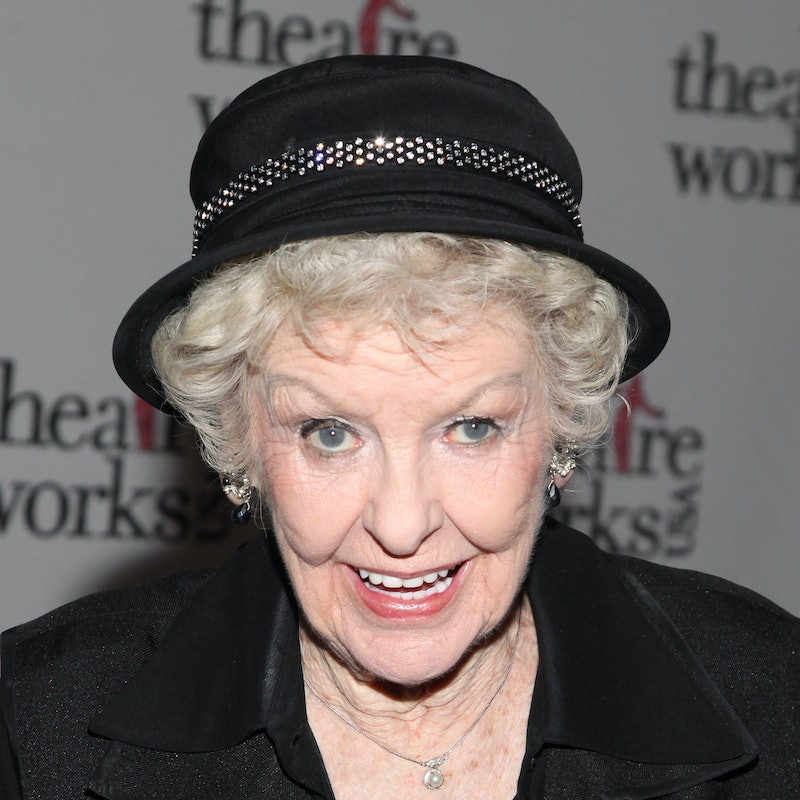 In very sad news for the entertainment industry, Entertainment Tonight reports that Elaine Stritch passed away on the morning of Thursday, July 17 at the age of 89. The woman was famous for her brassiness, and she had a sharp sense of humor; she never held back. She was a tour-de-force and comedic dynamo, but her bold personality really made her a dynamic figure in Hollywood, and beyond.

While Stritch rose to fame again with her Emmy-nominated performance as Jack Donaghy's mother Colleen on 30 Rock, she actually had been charting tremendous territory long before that. She was a theatrical force, as she was nominated for five Tonys, and she appeared in a number of Broadway shows, including No, No, Nannette, Bus Stop, Sail Away, and Company, in which she famously sang "The Ladies Who Lunch."

But beyond all of her work as an actress — which was seriously impressive, given her resume, and her ability to tackle the stage, the big screen, and television — she was completely unapologetic. She had a bite and relentlessness that's inspiring, and she's said quite a few things that are incredibly powerful.

To toast the remarkable Stritch, and to commemorate her, the stellar lady she was, here are some of her best, most empowering quotes she allegedly said over the years.

"I find it easier to abstain than do a little bit of anything. I'm not a 'little bit' kind of dame. I want it all, whatever I do."

"I don't think there's any thrill in the world like doing work you're good at."

"Fear is the base of what everybody does wrong in their lives."

"I have not had any of that surgical stuff. I am too curious to find out exactly how I progress every day of my life naturally. That is what fascinates me."

"I don't wear a wig. I'd feel terrible onstage with a wig. I hate to be so 'Actors Studio'-ish, but I like to feel it's me out there."

"I've looked my worst, I’ve seen myself photographed badly, goodly, whatever. I’m not afraid of anything like that anymore. That’s dumb, to be afraid of that. 'Ohh, no makeup! Wait, my hair!' Please. You know what I mean? I'm not scared of that anymore in life."

"I am not influenced by other human beings. But I am inspired."

But Stritch probably would have wanted us to sign off with a zinger, so here a few of Colleen Donaghy's words...

"Two women, Jack? At the same time? What are you, Italian?"

"My father did not kill dozens of Germans so that his daughter could die in a van."

"Don’t talk to me like that Jack. I breastfed you for nine years.”

Jack:“ Those are terrible last words.”