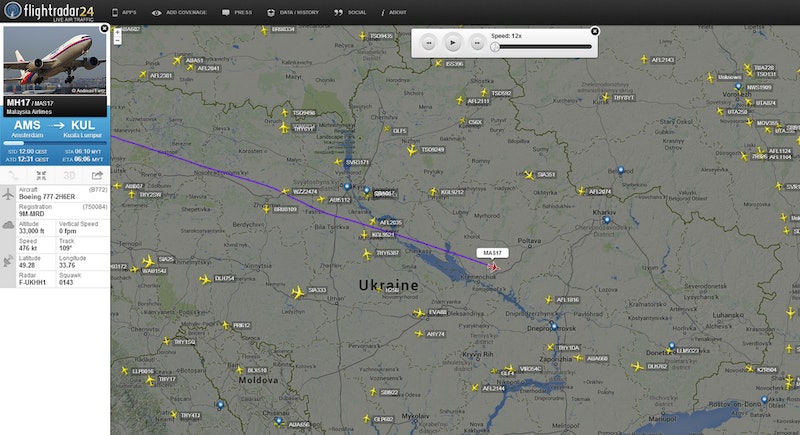 A Malaysia Airlines Boeing 777 was reportedly hit by a missile Thursday while flying over eastern Ukraine — a region that has been under assault of pro-Russian separatists over the last several months. According to media reports, MH17, which departed from Amsterdam, disintegrated mid-air and crashed near the town town of Torez, a city in Donetsk Oblast about 50 kilometers from the Russia border. There were 295 people onboard.

Tensions between the rebels and the Ukrainian military have escalated in the region in recent weeks, with separatists allegedly launching missiles at Ukrainian fighter jets. On Wednesday night, a military jet was reportedly shot down by pro-Russia separatists, and the Ukrainian government blamed Russia for the attack. Ukraine officials added that rockets have been launched recently from Russia territory.

No Restrictions Placed On Ukraine Airspace

But despite the increasing violence in the region, there were no restrictions placed on the airspace over the Crimea or the greater eastern Ukraine region, including the war-torn Donetsk Oblast.

"Based on the information currently available it is believed that the airspace that the aircraft was traversing was not subject to restrictions," the International Air Transport Association said in a statement.

Flying over Ukraine is a route that is commonly taken on international flights, especially those traveling between the Netherlands and Malaysia, aviation analyst Mary Schiavo told CNN.

According to flight tracking website Flight Radar 24, there were two other commercial planes flying nearby MH17 when it lost contact with air traffic control: Singapore Airlines SQ351 and Air India AI113. Those two flights were only 25 kilometers from MH17.

More flights are now being diverted, avoiding the eastern Ukraine airspace altogether. Many of these flights have been rerouted to fly over Turkey and Bulgaria. Airlines such as Air France have also taken formal precaution, announcing that they're avoiding the Ukraine at all costs.

"Air France is monitoring the situation in real time and decided to no longer fly over eastern Ukraine after it was informed of this incident," a spokesperson for Air France told press.

Details are still to follow from Malaysia Airlines, but the company confirmed the plane's last known location:

Malaysia Airlines confirms it received notification from Ukrainian ATC that it had lost contact with flight MH17 at 1415 (GMT) at 30km from Tamak waypoint, approximately 50km from the Russia-Ukraine border.

Although the eastern Ukraine, including Donetsk Oblast, has been a hotbed of political unrest, Malaysia Airlines never issued a travel advisory directing flights to avoid the area. Only after the crash of MH17 did the airline advise its pilots to rework their routes. An in-progress flight that left Paris on Thursday has been rerouted to fly over Romania, instead of taking the common Ukraine route.

But Malaysia Airlines and the Malaysian government isn't the only ones that failed to predict the dangers of flying in eastern Ukrainian airspace.

In fact, even the United States didn't see the potential threat to the skies from the pro-Russian separatists.

In late April, the Federal Aviation Administration issued a special notice to U.S. commercial flights, prohibiting them from flying over the Simferopol region, which includes the pro-Russian Crimea peninsula. The prohibition, which is in effect until April 2015, states that flights can only travel through the region are ones that are under contract, grant or cooperative agreement with the U.S. government with approval from the FAA.

However, the reason for this advisory was not potential violence, but because the airspace was contested — Russia claimed they took over the air traffic control of the region from the Ukraine. The International Civil Aviation Organization, a branch of the United Nations, also warned airlines to avoid the Crimea peninsula because of Russia's new control.

However, it's important to note that the restricted airspace area only covered the Crimea peninsula, which is further south than Donetsk Oblast, where MH17 crashed.

Flights Continue To Travel Over The Area

Despite Thursday's tragedy, aviation officials said that the eastern Ukraine airspace remains unrestricted. "Passengers are still flying over Ukraine. There is no closing of the air space," Tytgat Luc, director at Euro Control, told CNBC. "The air space is still open for commercial airlines."

If there was indication that the Donetsk region was growing more violent since the Russian insurgency, it was the battles that raged on last week outside the Donetsk International Airport, which is the second-largest airport in the Ukraine. There, the rebels allegedly launched a "reconnaissance attack," using artillery such as machine guns. The rebels were defeated by Ukrainian troops, who have held onto the airport since they took it over in May.