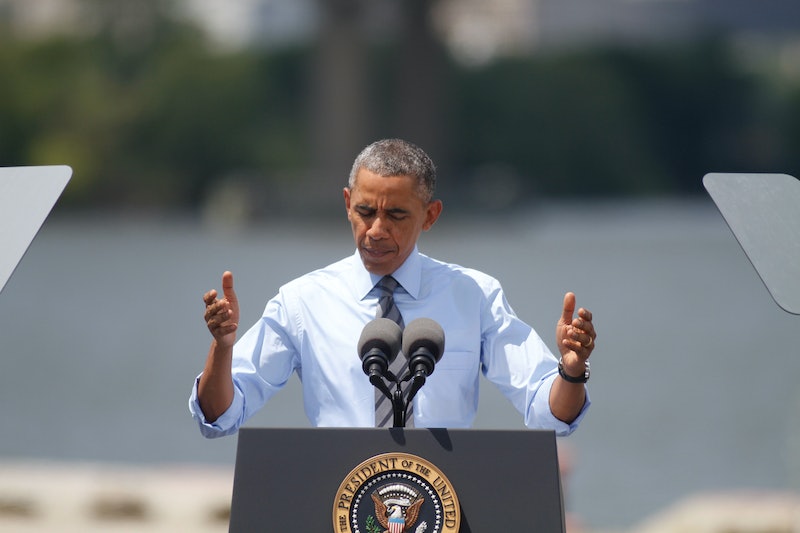 Hours after Thursday's devastating crash of Malaysia Airlines Flight MH17, President Obama appeared at a previously-scheduled press conference in Delaware to speak about the tragedy. Ukraine has alleged that 23 Americans were onboard the flight, which was apparently shot down by a missile on Ukrainian side of the Ukraine-Russia border, but the U.S. State Department hasn't confirmed nor denied these reports.

"It looks like it may be a terrible tragedy," the President said. "Right now, we are working to determine whether there were American citizens on board. That is our first priority.”

The President was scheduled to speak about transportation, but, as expected, veered off-script to discuss the unfolding situation regarding the crash. The U.S. is in close contact with the Ukrainian government, he added. "[The United States will] offer any assistance it can to help determine what happened and why. As a country our thoughts and prayers are with all the passengers and families.”

You can find live updates on this developing story here.

The full transcript, courtesy of the White House:

Before I begin, obviously the world is watching reports of a downed passenger jet near the Russia-Ukraine border. And it looks like it may be a terrible tragedy. Right now, we’re working to determine whether there were American citizens onboard. That is our first priority. And I’ve directed my national security team to stay in close contact with the Ukrainian government. The United States will offer any assistance we can to help determine what happened and why. And as a country, our thoughts and prayers are with all the families of the passengers, wherever they call home.