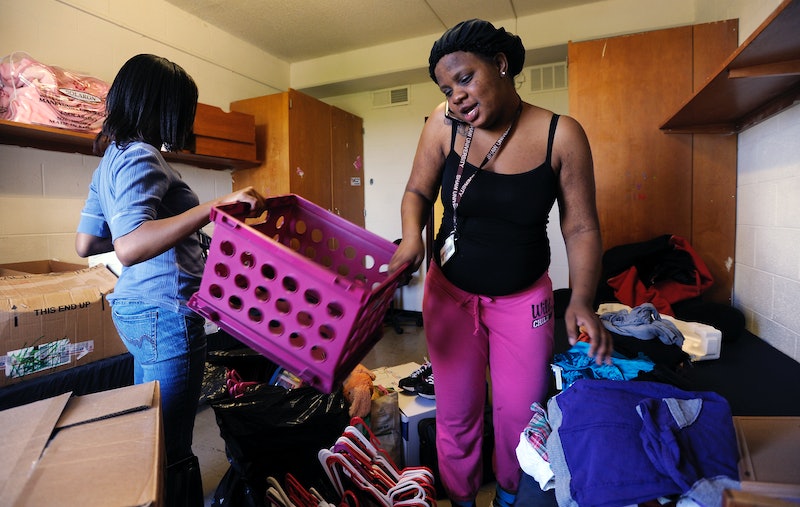 Ah, college. That magnificent era of freedom, communal bathrooms, and tiny closets, a.k.a a dorm at UCF. That's right, at the University of Central Florida, a few unsuspecting incoming freshmen were assigned bathrooms or closets as their first collegiate homes. And you thought you couldn't fit your bean bag chair anywhere!

As reported by KnightNews.com, UCF's independent, non-profit news source, a few freshmen received a nasty surprise when they went in search of their new residences. Ashlyn TenBieg noticed that something was amiss when she visited the UCF Class of 2018 Facebook page and found that she was the only student without a roommate. While she had an assigned room number and building, she had no one to share her new space with, which seemed a bit unusual.

TenBieg then decided to call the housing office, who delivered some unpleasant news — TenBieg's room number corresponded to a bathroom. And considering that the Neptune Community, which TenBieg was placed in, only features suite-style housing with four private bedrooms and two bathrooms, TenBieg would have been the ultimate fifth wheel.

But TenBieg was not the only victim of UCF's housing error — another student named Brian Schickman ran into a very similar problem with his own rooming situation. Unlike TenBieg, Schickman had already selected his roommate for the fall, but found that their housing assignments were constantly in flux, changing not only room numbers, but even floors and whole buildings.

Finally, his roommate's frustrated parents decided to call the university, whereupon they were told that the boys were initially placed in closets, necessitating the adjustments. Happily, both TenBieg and Shickman noticed the problems themselves and resolved the issue well before the move-in date.

These misplacements caused UCF housing to complete a more thorough audit of their room assignments, whereupon they found a few more mistakes that have since been rectified. While this is certainly happy news for the students, I would've loved to find out what it would be like to spend a semester living in an elevator.

The Neptune Community is one of the more expensive residential options available to students, with a price tag of $3,000 per semester. In addition to the four-person suites, the community also features a community living room, study space, kitchen, and laundry facilities on each floor, which means that some unlucky students might have been assigned to sleep next to a dryer or an oven.

This is not the first time UCF has struggled with housing, as KnightNews reports. According to Courtney Gilmartin, a spokeswoman for UCF, one student was placed in a nonexistent room during the summer term. Of course, once this was brought to the university's attention, the student was given lodging in an actual room.

Gilmartin believes that many of these issues are a result of Neptune's status as a brand new housing community. Calling it a "programming glitch," Gilmartin explained that many of these problems would have resolved themselves as the start of the school year draws closer and further preparations are made for the freshmen.

Even so, there's something particularly unwelcoming about calling a bathroom your home, particularly when it's someone else's bathroom to begin with.

While these closets and bathrooms are certainly no one's dream dorm, they are still a far cry better than the Hong Kong "capsule dorms" proposed in early 2012. Effectively a slightly oversized coffin, these "sleep boxes" are somewhat popular in Japan, and take minimalism to a whole new level. In a city with limited real estate, the concept is practical, if nothing else. But certainly not desirable.

The rooms are a mere six feet long, three feet wide and four feet high, giving its residents a total personal space of just 72 cubic feet. For reference, a prison is generally six feet long and eight feet wide. Galaxy Stars Ltd, the company behind the idea in Hong Kong, offered to allow college students the opportunity to rent a capsule dorm for the bargain price of 3,500 Hong Kong dollars a month, or $450. This price would include electricity and wifi, though with strict limitations.

So remember kids, there is always a worse alternative somewhere out there. Even if you're living in a closet.