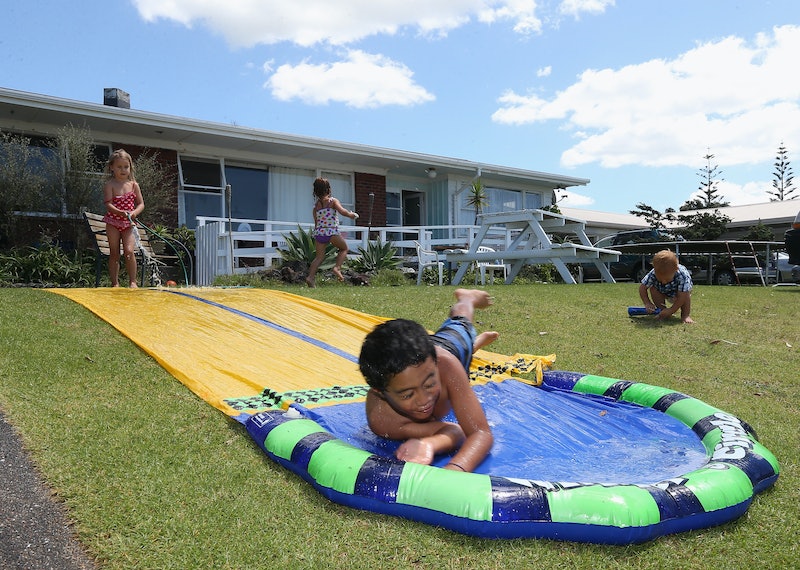 Let’s talk about something you probably haven’t thought about in 10+ years: Slip ’n Slides. Remember those? The Atlantic recently served up a slice of nostalgia by spotlighting the cherished toy and its origins — an aspect of the Slip 'n Slide you definitely didn't consider while careening into one as a kid. But for all of those former (or possibly current) sliders curious as to how exactly Wham-O came up with such an incredible toy, it has to do with two things: body planing, and film strips.

According to The Atlantic, the original patent for the Slip ’n Slide — printed on May 2, 1961 — explains that the water toy was actually created as a safe alternative to what is called "body planing". Body planing is essentially the act of sliding into shallow water and propelling forward via slick mud. The patent points out that the desired body planing environment — one that not only includes a shallow body of water and mud, but also 20+ feet of space to plane — is hard to find. The patent also notes that the rocks and other “sharp and abrasive materials” one might encounter during a typical body planing session are quite dangerous. This is where the film strip part comes in...

Enter: the first Slip 'n Slide, the solution to such a fun, yet highly dangerous activity. According to the patent, the Slip ’n Slide’s design was, in fact, inspired by a strip of film:

“A feature of this invention is to provide an elongate, horizontally disposed film-like strip of flexible material having a smooth upper or top surface, a soft, flexible, and/or resilient support for the strip, and irrigating means extending longitudinally of the strip to distribute a film of lubricating water over the said surface of the strip.”

Basically, the design allowed for one to slide down a lubricated surface just as they would while body planing — but without the sharp materials. And so, the Slip ’n Slide, one of America’s most cherished summertime toys came to be.

Aside from numerous updates, and a couple recalls over the years, Slip 'n Slide is still making headlines decades after it's original patent date. According to ABC News, "skydiving daredevil” Niklas Daniel jumped head first out of a plane and landed/glided ever-so-gracefully down a Slip ’n Slide. I wonder if he yelled “Mom! Mom! Momma! Mommy! Watch this! Watch me do this!” right before exiting the plane...

More like this
American Girl Doll Memes Are Going Viral On Instagram & Tiktok
By Emma Carey
20 Genius Kitchen Storage Solutions For Decluttering Your Space
By Emma Garza
Is The Insta-Famous Always Pan Actually Worth It?
By Jessica Goodman
Poshmark Vs. Depop: How The Reselling Apps Compare
By Emma Carey
Get Even More From Bustle — Sign Up For The Newsletter