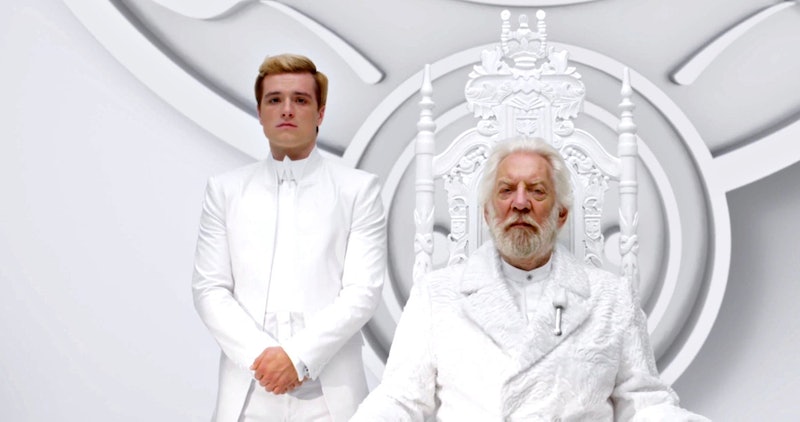 There's something strangely satisfying about a marketing campaign done well. Just look at the smash hit the Old Spice guy became, or the way people react to bad advertising decisions like the time The Hunger Games: Catching Fire teamed with Subway. The social media team for The Hunger Games: Mockingjay seem to be doing markedly better than their predecessors so far, though — in fact, they seem to be showing the world exactly how transmedia can enhance the audience experience long before people even buy their tickets to the movie.

We caught a glimpse of Mockingjay's marketing thought process with their series of posters of "District Heroes," and chills went through the collective audience's spines when the first two Mockingjay teasers included a captive Peeta and a pirate transmission from District 13.

That pirate transmission, it turns out, is not the only one that's gotten past the Capitol in the name of this campaign. Though there's yet to be a third teaser — or a full trailer — for The Hunger Games: Mockingjay, Part 1, that in no way means the rebellion forces have been inactive. Just check out this tweet that was sent out from the official "Capitol Ministry of Information" on July 15:

The tweet was deleted soon after, but as Tumblr user tomorrowsofyesterday points out, the G-Bb-A-D at the end are the notes from Rue's whistle, a tune iconic within the Hunger Games universe as a symbol of the rebellion.

Speaking of symbols of the rebellion, if you look at the source feed of the Capitol's official homepage it will lead you to this:

It's the kind of marketing moment that requires a lot of faith in the audience. Faith that someone, somewhere, will screenshot tweets before they're deleted — and faith that the right people will click the right things and document that they happened.

And as far as marketing campaigns go, this one feels pretty badass. If we're gonna be advertised to, it might as well be in a way that kind of makes you wish you were part of a revolution.

For the record, this is the most recent sanctioned twitter missive from the Capitol: