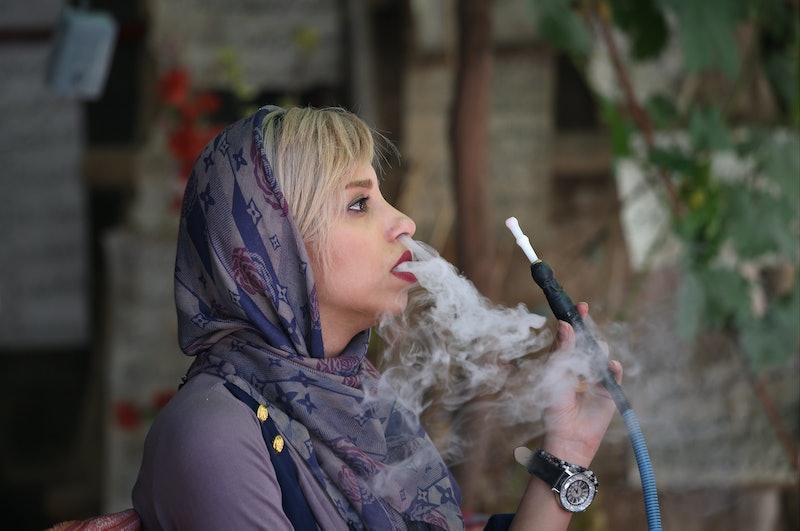 Put down your pipes, flavored smoke lovers, that hookah is worse than a cigarette. Hookah, often considered a less dangerous, more socially acceptable alternative to smoking, has grown in popularity both nationally and around the world. But while many users, particularly teens, seem to believe that smoking hookah eliminates the risks associated with traditional cigarettes, recent studies have proven quite the opposite to be true.

Given hookah's particular popularity among high school and college students, the misconceptions about its health consequences are especially dangerous. In the past few years, the appeal of hookah has boomed, and its use has increased dramatically. This rise popularity coincides with a decrease in cigarette use, which a Center for Disease Control survey reports is at its lowest rate in the history of the study.

Much of this shift may be attributed to misunderstandings about the dangers associated with hookah. While anti-cigarette campaigns have been in play for decades, the same health warnings have not been as widely applied (or as widely regarded) to other forms of smoking.

Recently, the UCLA School of Nursing conducted a study in which researchers visited three hookah lounges in the area, and asked smokers between the ages of 18 and 30 whether or not they believed that hookah carried significant health risks. A shocking 60 percent of respondents said that they did not think there were any dangers, with many pointing to the hookah's filtration system as a safety mechanism.

Unfortunately, these beliefs are all sadly unfounded. Let's take a minute to debunk these myths.

Myth: hookah removes toxic chemicals from the smoke when it is filtered through its water base

The mechanics of this are all sound, but that's about all that's right. When you smoke hookah, you inhale, which causes air to be heated by the charcoal held in the bowl of the pipe. This, in turn, vaporizes the tobacco, which is sent through the water jar, thus producing the bubbling noise indicative of hookah. The water cools the smoke, which is then returned to the smoker's lungs. That's all — it cools it.

The purpose of the water in a hookah pipe is not filtration, it is cooling. Perhaps hookah smokers associate a lack of a burning sensation with a lack of danger, but this is simply untrue. Rather, hookah adds an additional dangerous chemical by burning charcoal, which releases significant amounts of carbon monoxide into the air, making hookah lounges dangerous for both smokers and non-smokers alike.

Myth: the fruit in hookah makes it healthy

While some variants of hookah actually use a hollowed out piece of fruit in place of a clay, marble, or glass bowl, the health benefits of fruit do not transfer over in hookah use. Moreover, fruit is rarely added in its pure form to hookah — more often, flavors are artificial syrups.

Truth: the smoke in hookah is equivalent to 100 cigarettes

No, that's not a typo. Given the duration of a typical hookah session (around one hour), smokers inhale a phenomenal amount of dangerous toxins and chemicals. So much, in fact, that a 2005 World Health Organization study equated it to 100 cigarettes. Another study, funded by the National Institute of Health, estimates that a single hookah session produces 1.7 times the nicotine, 6.5 times the carbon monoxide and 46.4 times the tar of one cigarette. How's that for a healthy alternative?

Myth: You can't get addicted to hookah

This myth stems from the idea that water filters out the nicotine in tobacco. While water does successfully remove a small percentage of the addictive toxin, it leaves a whopping 95 percent of it behind. This is why hookah users tend to return to the practice, with some picking up smoking cigarettes in addition to hookah. Hookah smoke might not taste like tobacco, it is, at the end of the day, tobacco, and carries the same harmful properties as a normal cigarette.

Truth: You can get herpes, hepatitis and other diseases from smoking hookah

As if the dangers associated with the tobacco itself weren't enough, the shared mouth pieces used in hookah make it a breeding ground for all kinds of communicable diseases, including, but not limited to, tuberculosis, herpes, influenza, and hepatitis. When you consider that about 20 percent of Americans have herpes, another 20 percent are likely to get the flu each year, another 3.2 million Americans have hep C, and who knows what other germs floating around, hookah might be much less appealing than before.

With dangers like these associated with hookah, it comes as no wonder that many states are imposing bans on the stuff. After all, just because it tastes good doesn't mean it's good for you.

More like this
21 Photos Of Ben Affleck Holding Coffee, Cigarettes, Or J.Lo’s Hand
By Marina Watts
The Best Eye Creams For Eczema On Eyelids
By Masha Vapnitchnaia
The 5 Best Sand Flea Repellents For Bite-Free Living
By Elizabeth Enochs
6 Pilates Arm Exercises That'll Unwind Tight Shoulders
By Carolyn Steber
Get Even More From Bustle — Sign Up For The Newsletter