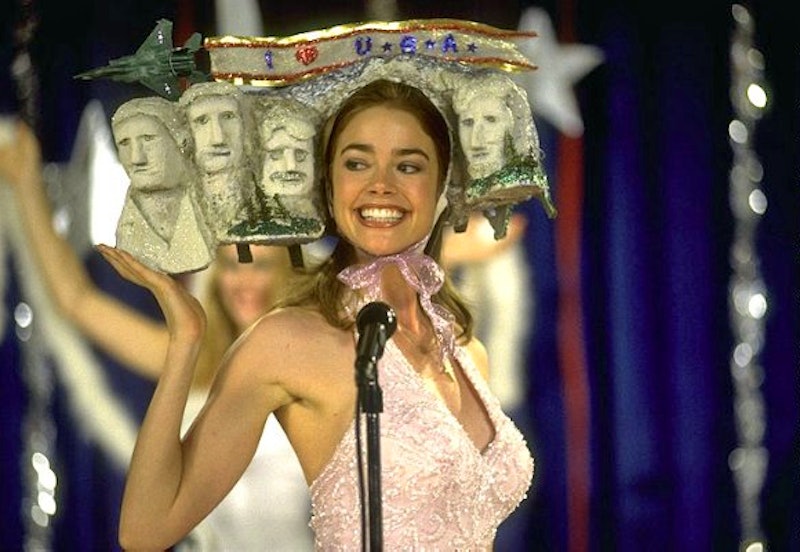 Wednesday, July 23 marks the 15th anniversary of beauty pageant mockumentary Drop Dead Gorgeous . 15 years ago, Kirsten Dunst tap danced her way into our hearts as the adorable Amber Atkins, a hard-working resident of Mount Rose, Minnesota, who wants nothing more than to win the title of Mount Rose American Teen Princess. Unfortunately, when she enrolls in the pageant, she has no idea what she's getting herself into. The pageants' despicable organizer and host, Gladys Leeman (a hilarious Kirstie Alley), will stop at nothing to ensure that her daughter, Rebecca Ann Leeman (Denise Richards), goes home with the crown — even if it means she has to kill a few people!

I hadn't seen Drop Dead Gorgeous in a few years, and when I sat down to re-watch it this week, I was struck by two startling realizations: First, "Wow, at times, this is really offensive!" and second, "BEAUTY PAGEANTS ARE SO INSANE!!!" Drop Dead Gorgeous may be a work of fiction, but it definitely takes its cues from real-life beauty pageants. Strange displays of "talent"? Check. Silly costumes? Double-check. Dumb interview questions and even dumber responses? Triple check. You see the same ridiculous shenanigans on television during the Miss America or Miss USA pageants (...minus all of the murder, of course).

For the talent portion of the evening, a contestant lovingly serenades a puppet with "Can You Feel the Love Tonight?" from Disney's The Lion King. Is it Drop Dead Gorgeous? Or is it real life?

Answer: It's real life! Yes, as strange as it sounds, at the 1995 Miss America pageant, Miss Colorado, Amy Lynn Ciccolella, sang to a puppet in a wheelchair in an attempt to raise awareness of various issues affecting children living with cerebral palsy. Before she burst into song, Ciccolella talked with the puppet (whose name was Mark) about whether or not he felt accepted by his peers.

Mark was a part of the United Cerebral Palsy Associations' Kids on the Block program, which sought to teach able-bodied children about disabilities through the use of puppets. Though Ciccolella's intentions were probably good, some people were offended by her act, saying that it perpetuated the idea that we should pity those with disabilities. She did not take home the top prize.

During the interview portion of the program, contestants are asked, "If you could be any tree in the woods, what kind of tree would you be?" Is it Drop Dead Gorgeous? Or is it real life?

Answer: It's Drop Dead Gorgeous! Yes, this question is fake, but one like it could absolutely pop-up during a real beauty pageant someday. After all, according to ThePageantPlanet.com, contestants have been asked such ridiculous questions as, "Why are you like a mango?" Seriously?

When asked "Who would you pick to be president, dead or alive?" one contestant immediately responds, "Brett Favre!" Is it Drop Dead Gorgeous? Or is it real life?

Answer: It's Drop Dead Gorgeous! The ditzy Leslie Miller (played by a then unknown Amy Adams) answers this stupid interview question with an equally stupid answer.

When asked about her feelings regarding the controversial practice of euthanasia, one contestant says, "You know, that's one thing that I'm not very educated on, so I need to look up on exactly what that means. But I do know it's a vaccine, correct?" Is it Drop Dead Gorgeous? Or is it real life?

Answer: It's real life! In preparation for the 2012 Miss America pageant, Miss California, Leah Cecil, totally botched this question during a practice interview, which was documented by ABC News. If only she had just stopped talking after admitting that she needed to look the word up! In her defense, sometimes stuff just comes flying out of your mouth when you're put on the spot.

Shortly after winning the crown, a contestant eerily exclaims, "I'm so excited! I mean, I won. I'm the winner." Is it Drop Dead Gorgeous? Or is it real life?

Answer: It's Drop Dead Gorgeous! Rebecca Ann Leman is just so proud of herself for overcoming so many obstacles and winning a pageant that was rigged in her favor to begin with! She's an inspiration.

Which one of the following two talents occurred during a real beauty pageant?

A. Slow dancing across the stage with a puppet version of Jesus on the cross to Frankie Valli's "Can't Take My Eyes Off You"

B. Singing "I Want to Be a Cowboy's Sweetheart" with two ventriloquist dummies that specialize in yodeling

Answer: It's Drop Dead Gorgeous, of course! Amber Atkins is just the sweetest/most naive little squirt there ever was. However, I think she loses her innocence a little bit at the end of the movie when she arrives at the Sarah Rose Cosmetics headquarters only to discover that the company has gone out of business and the national pageant has been cancelled. Devastating.

Question 8: I Don't Even Know

Again, during the interview portion of the night, contestants are told, "Describe a pizza and tell how you are like each ingredient." Is it Drop Dead Gorgeous? Or is it real life?

Answer: It's real life! According to ThePageantPlanet.com, pageant contestants have actually been given this ridiculous prompt before.

Question 9: One of These Talents Is Not Like the Others

Consider the four bizarre talents listed below — only one of them appears in Drop Dead Gorgeous. Can you pick out which one?

A. Painting a portrait of Bruce Lee while standing on one leg

B. Imitating how various breeds of dogs bark

Answer: It's B! Dog lover Tess Weinhouse shows the good people of Mount Rose, Minnesota just how different dogs' barks can sound. It's...quite something. Believe it or not, the rest of the talents listed above are actually legit. Naturally, contestant Lisa Wong painting a giant portrait of martial arts legend Bruce Lee while dancing, spinning around, and occasionally standing on one leg during the 60th Annual Narcissus pageant, is required viewing.

Last one! When asked what the pageant means to her, one contestant responds, "I believe this pageant is an important experience for every young woman. It teaches you what's really important in life, and it has the power to change you in ways you never dreamed of." Is it Drop Dead Gorgeous? Or is it real life?

Answer: It's Drop Dead Gorgeous! At the beginning of the film, Rebecca Ann Leeman gives the audience a little hint as to how far she's willing to go in order to claim the crown — but can't you imagine these exact words coming out of a real contestant's mouth?