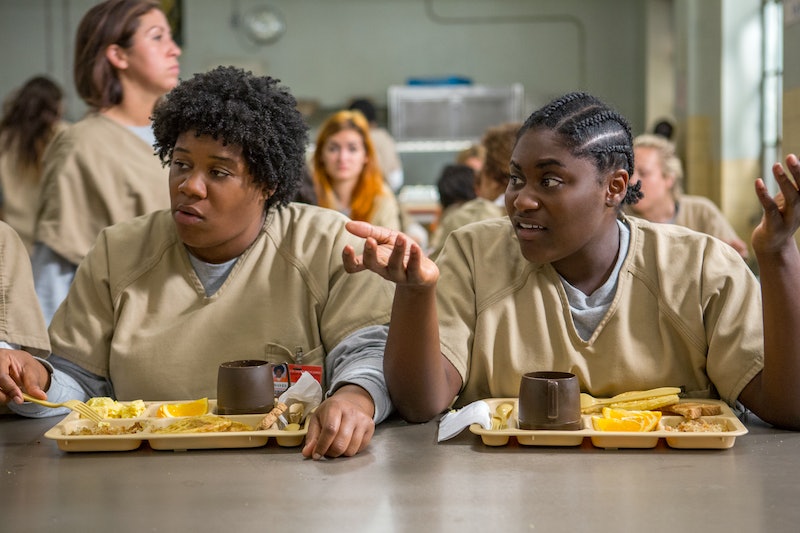 Here's the good news: unlike the first year, this past season of Orange is the New Black didn't end with a huge, game-changing cliffhanger. Here's the bad news: instead, this season's final episode was so incredibly satisfying that it made us fans even more excited for next year than we thought was possible. And the worst news of all? We have wait nearly a year before we'll get to find out what happens next in the lives of our favorite Litchfield inmates.

"We're churning them out as fast as we can!" says Adrienne C. Moore, known as Black Cindy on the show, of the new episodes.

Luckily, during our long wait for season three, Moore is here to ease our pain — well, at least as much as she's allowed.

"It's looking so good," she says, of the episodes the cast has already filmed. "I feel like every time the writers put something out there, it just exceeds my expectations."

Meaning: "It’s better than the first, and the second."

Although she was hesitant to reveal many details ("I don't want to spoil it for you!"), Moore did say that Orange's third season dives deeper into some of the heavy themes the show's touched upon so far.

"We continue to build upon a lot of the topics that we talk about in the first and second seasons: things with race, obviously, with politics and the government," she says.

Moore also adds that they're "exploring more characters," including some who've already had backstories featured on the show.

"We’re getting more in depth with that," she says.

New characters, too, will have their time in the spotlight, just as Moore's Black Cindy recently got a flashback episode and major plotline after having little screen-time in season one.

"The characters and the storylines are so compelling that you can just close your eyes and pick one out of the pack, you know," Moore says. "You can literally go any angle, and you wouldn't be bored."

One angle fans are dying to see more of next season is how the presumed death of Vee, the show's villain, affects those at Litchfield who knew her.

"I'm anxious to see how that continues to develop," Moore says, adding that during Vee's time in prison, "she touched a chord" with Cindy when it came to family and responsibility.

"She makes her really think about her life and what’s important to her and what she does and doesn’t take seriously," she says.

Speaking of family, Moore says that as of now, she doesn't know if viewers will see more of her character's pre-prison home life, including a young daughter being raised by Cindy's mother.

"There’s so many turns," Moore says. "You just have to wait patiently and hope that something will surface."

Black Cindy likely won't be the only character to feel the effects of Vee's brief but impactful stay at Litchfield.

"Crazy Eyes definitely found a huge connection with Vee, so it’ll be interesting to see how that will play itself out," Moore says, adding that she "wouldn't be surprised" if there are repercussions to Suzanne nearly taking the fall for the attack on Red.

The friendships between the inmates, too, will certainly see a change now that Vee is out of the picture.

"There was a huge dynamic shift within the ghetto dorm," Moore says, referring to the name given to the group of women — Cindy, Poussey, Taystee, Suzanne, Janae — frequently seen together in the show. "That caused a bigger rift and a falling out with the other communities, because we weren’t meshing with the Latina chicks, we weren’t vibing with Red and her crew... Vee really shook things up, not only internally, but amongst the different groups in prison."

And as for whether the "psychopath," as Moore describes her, last seen lying on the side of the road after being hit head-on by a car, is gone for good?

"You can never give away the cliffhanger!" she says, laughing.

In other words: for all we know, Vee could be back at Litchfield by episode one.

"Hey, it’s TV," Moore says. "With good writing, you can make anything possible."