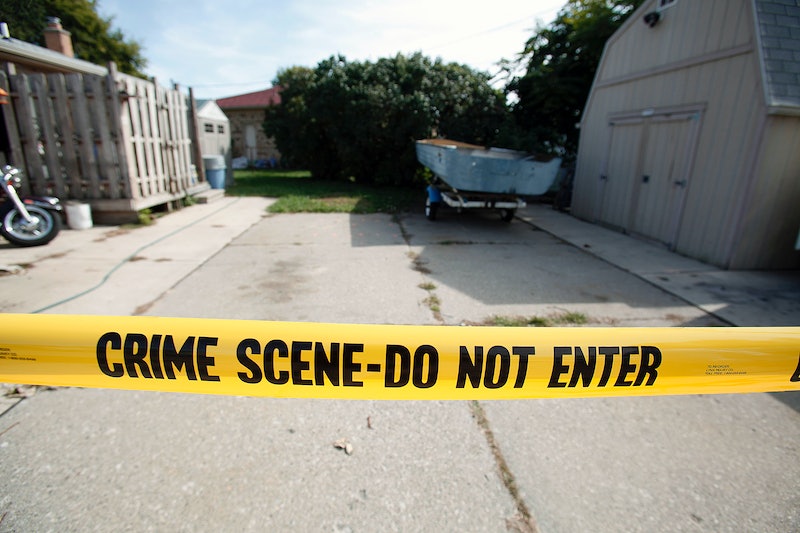 If you have your TV set to record every Law & Order episode, you like murder. You like it when one or more characters kick the bucket in the course of a narrative. (You also like exploding DVRs.) Lucky for you, stories about death — in their many forms, both bloody and not — don't all have to happen on a screen. Crime fiction has everything you love when you sit down in front of something like The Killing and can't turn away, no wires needed. And if you haven't started reading crime yet, you're missing out. These are the authors that are going to prove it to you.

Where do you start reading, though? Here's an idea: it’s an unfortunate but well-documented fact that women writers are reviewed less than their male counterparts. This goes for crime fiction as well as literary fiction (a sometimes maddening distinction — this list will show you why). If this unequal division of recognition irks you — and it should — then the best place to dip your toe in the crimson waters of crime fiction is with one or more of the fantastic female authors below.

Just like all readers aren’t the same, all crime fiction can’t be shoved into a tidy box. The term is like an umbrella with writers huddling under it. This means that if you’ve got a thing for tough women trying to prove themselves in a male-dominated cop shop but your best friend prefers stories about cats who knit and solve crimes between stitches, you can both get what you want. There really is something for everyone. And these 11 authors are just the tip of a Titanic-destroying iceberg. So get reading already.

Abbott started out writing pulpy potboilers in the style of men whose names you probably recognize, like Dashiell Hammett and Raymond Chandler — and she's made an argument for why she's surpassed her hardboiled forefathers. If you’re a fan of film noir, try Abbott’s Die a Little or The Song is for You. Her most recent three novels — The End of Everything, Dare Me , and The Fever — delve into something just as terrifying as a shadowy man with a Saturday night special: the mind of teenage girls. Few writers today can tap into the teen psyche like Abbott, and her books are both familiar and utterly terrifying.

You should start with: The Mysterious Affair at Styles (1920)

There’s a reason Christie is known as the Grand Dame of Mysteries. If you’re worried her writing will feel dated, fear not. There’s something infinitely fascinating about a locked room mystery, a subgenre Christie helped pioneer. To get your first taste of Christie, and her peculiar Belgian detective Hercule Poirot, there’s no better place to start than with The Mysterious Affair at Styles. If you’re feeling daring, or want to see an example of Christie at the top of her game, try The Murder of Roger Ackroyd . It would be unfair to say more than when you’re finished, you’ll understand what makes the book so remarkable, particularly in 1926.

Chances are if you’re familiar with Du Maurier, it’s because of Alfred Hitchcock. He brought the classic Rebecca to the screen in 1940, with Joan Fontaine as the naïve, perpetually trod-upon second Mrs. de Winter, and Laurence Olivier as Maxim de Winter, a man who prefers possessing women to actually loving them. Gothic romance doesn’t get much better than this, and villains don’t come much creepier than the omnipresent Mrs. Danvers, a housekeeper unnaturally attached to her former employer. After reading this tale of — spoiler alert — doomed love, you may find yourself muttering the opening lines (“Last night I dreamt I went to Manderley again”) first thing in the morning.

Not only is Evanovich’s series easy to keep track of in your head (as long as you can count), each entry is equally quirky and fun. Featuring down-on-her-luck New Jersey bounty hunter Stephanie Plum, these are the perfect books to read on the beach, at the pool, or on the plane. There’s romance (will Stephanie choose sexy cop Joe Morelli or the mysterious, but equally sexy, Ranger?), intrigue (things blow up — a lot), and a hilarious cast of secondary characters (namely Stephanie’s ex-prostitute sidekick Lula and Grandma Mazur, Stephanie’s grandmother who sometimes carries a gun and is always up for attending a funeral).

This Dublin-set series is like no other. Instead of following one main character over the course of several books (French is up to five now), the perspective shifts ever so slightly and formerly secondary characters step into the spotlight. For example, her debut features a pair of cops, Rob Ryan and Cassie Maddox, but is mostly focused on Ryan and his traumatic childhood. Ryan fades away in the second book, The Likeness , and Maddox takes over. Since all the books feature the Dublin Murder Squad — “homicide detectives” to those of us across the pond — it’s fair, but not wholly accurate, to call French’s series police procedurals. Each entry is also a taught, stand-alone psychological thriller and French’s prose will make you wonder once again why there has to be a divide between literary and crime fiction.

If you’re of the TV-watching persuasion and like cop shows, you’ve probably seen at least a few episodes of TNT’s Rizzoli & Isles, featuring Boston homicide detective Jane Rizzoli and her best friend, Dr. Maura Isles, the chief medical examiner. Although some plot points carry over from book to show, it’s safe to say that reading Gerritsen’s long-running series won’t spoil anything. If anything, you’ll gain a deeper understanding of what makes the duo tick, in addition to encountering (and maybe reveling —depends on your personal creep-o-meter) some of the more depraved killers, both serial and one-timers, in contemporary crime fiction. All this plus the opportunity to absorb all kinds of nifty autopsy terminology — perfect to break the lull in any conversation. If medical thrillers are your thing, also check out Patricia Cornwell (start with 1990’s Postmortem ) and Kathy Reichs (the hit show Bones is based on Reichs’s Dr. Temperance Brennan, who first appeared in 1997’s Déjà Dead ).

You should start with: Strangers on a Train (1950)

Once again, Alfred Hitchcock might be the reason Highsmith’s name rings a bell. He adapted Strangers on a Train, the tale of two, wait for it, strangers who meet on, wait again, a train and decide to commit murder for each other, in 1951, with Farley Granger and Robert Walker as the titular strangers. Highsmith also reentered the cultural lexicon — her ardent fans will argue she never actually left — with 1999’s adaptation of The Talented Mr. Ripley, starring Matt Damon as the personality chameleon who has no qualms about killing to get what he wants. Highsmith — even when the tale is bleak, as hers nearly universally are — manages to inject a healthy dose of black humor, all while giving you a knot of dread in your stomach.

Unless you’ve been orbiting the moon in a news-free pod, you’re probably at least aware that Scandinavian crime fiction is a big thing. Though quality Nordic exports reached our shores long before Lisbeth Salander arrived, Stieg Larsson’s The Girl with the Dragon Tattoo really kicked everything into high gear. But Larsson is far from the only Scandinavian you should read, and he might not even make the top five (it should be noted that the original Swedish title of Tattoo is Män som hatar kvinnor or Men Who Hate Women). Fellow Swede Camilla Läckberg, on the other hand, is a must-have. Her series, set in the remote and challenging to spell let alone pronounce village of Fjällbacka, features writer Ericka Falck and her friend (later husband), detective Patrik Hedstrom. Similar to the English countryside mysteries of Christie, where a small town seems to suffer a staggering decrease in population thanks to a variety of killers, Läckberg eschews the more common setting of Stockholm, or even Wallander creator Henning Mankell’s Ystad. The often claustrophobic environment certainly works in her favor.

You should start with: Black Water Rising (2009)

It’s the 1980s in Texas, a place of slippery characters with even slipperier morals. In her accomplished, socially timely debut, Locke offers us ex-civil rights worker turned lawyer Jay Porter who, as with so many heroes in crime fiction, finds himself unintentionally swimming in the deep end. Black protagonists are somewhat of a rarity in crime fiction and Locke’s refreshing, violence-soaked take on life in the South is a welcome addition to the genre and should be near the top of your to-read pile.

You should start with: Indemnity Only (1982)

The late '70s and early '80s were when the American female P.I. was born. The three masters of this now-popular subgenre — Marcia Muller, Paretsky, and Sue Grafton — showed the world that women were just as capable of being private dicks as men. While all three women should make their way on to your shelf at some point (try Muller’s Edwin of the Iron Shoes and Grafton’s A is for Alibi ), Paretsky is the perfect place to start because not only does she have a kick-ass heroine in Chicago-based P.I. V.I. Warshawski, but she manages to weave in current events and social questions without coming off as pedantic. It’s safe to say that without the pioneering work of Paretsky, Muller, and Grafton, the crime fiction landscape of today would be wildly different.

Historical murder mysteries occupy a hefty portion of the crime fiction universe, with books set in places as disparate as ancient Rome and Victorian England. Rowland, however, lays claim to a very specific, and fascinating, niche: 1600s Japan. Her hero is Sano Ichiro, a private investigator for the shogun and who just happens to be a samurai. He’s a man of many talents. Of course, in Edo, Japan in the 17th century, private eyes had much fancier titles: Sano is known as Most Honorable Investigator of Events, Situations, and People. Perhaps a little long for a modern business card, but he undoubtedly gets the job done time and time again. Rowland’s 18th installment in the series is due out in December 2014.

More like this
Lib & Will’s Romance In 'The Wonder' Is Very Different From The Book
By Sam Ramsden
The 'Fleishman Is In Trouble' Book Ending Is Still Open To Interpretation
By Grace Wehniainen
Taffy Brodesser-Akner Can Write Anywhere — Even The Bathroom At Bloomingdale’s
By Samantha Leach
This Former Ballerina’s Novel Is Set In The “Seductive, Cutthroat” Dance World
By The Editors
Get Even More From Bustle — Sign Up For The Newsletter