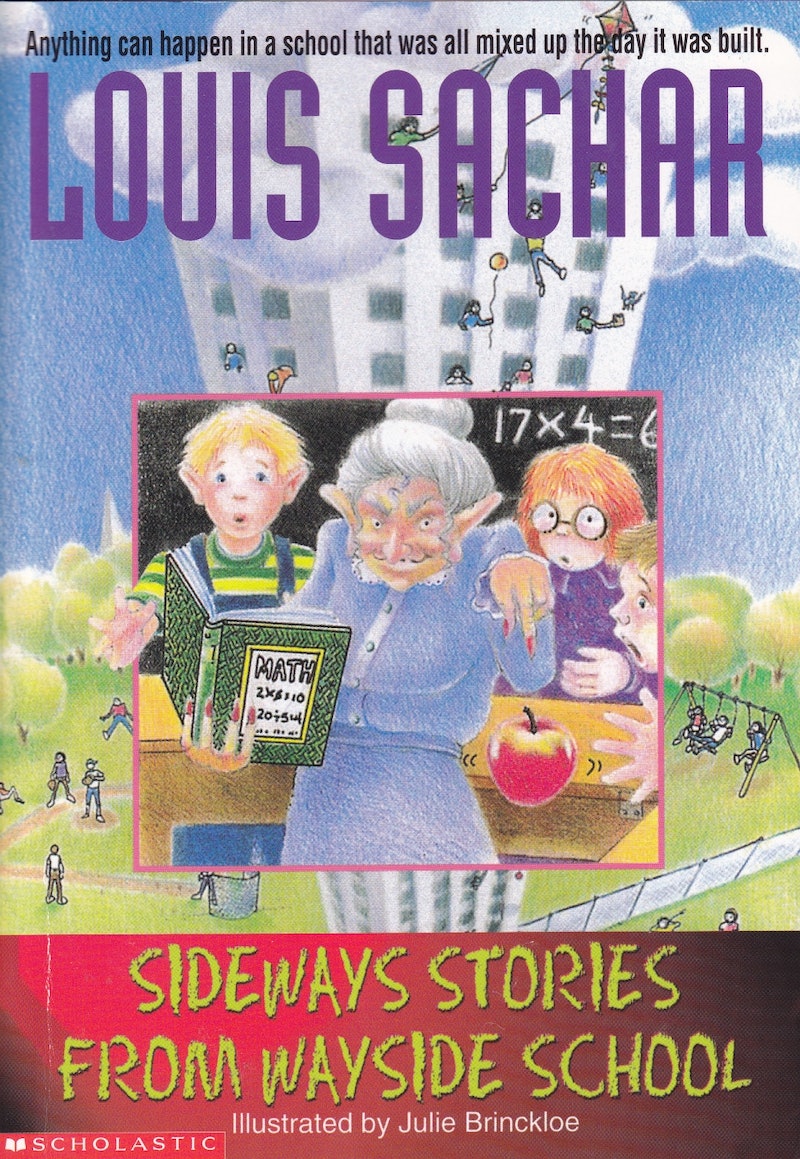 Chances are Louis Sachar’s Sideways Stories from Wayside School shows up on — if not tops — the list of strangest books you read in elementary school. Since 1978, Sachar’s whimsically macabre (read: cute yet traumatizing) tales have entertained generations of children with snippets from Mrs. Jewls’ classroom on the 30th floor.

You might remember a few classic moments from Wayside School, like when the students turned their first teacher, Mrs. Gorf, into an apple and watched in terrified silence as Louis the Yard Teacher unknowingly ate her in front of their eyes. Or when the students discovered that the new kid, Sammy, was in fact a dead rat disguised by hundreds of rain coats. Or when Maurecia, the girl who loved ice cream, ran out of new flavors to try and began developing a taste for her classmates instead. (Are you picking up on all of the implicit cannibalism this time around? How did we miss that? )

What if we got a chance to see how the students at Wayside School turned out — to see if their bizarre elementary school experiences inspired the course of their lives or left them forever scarred? And to find out for sure: Did they ever get around to actually learning arithmetic? Here are a few possible theories on what happened to the crew:

Remember Sharie who wore a 35-pound parka to school and always fell into such a deep slumber during class that one day she rolled out the window? Well, she may have made it through that experience safely, but she wasn't so lucky in college. Her professors unfortunately didn’t share Mrs. Jewls’ view that some people do their best learning while they’re asleep. Luckily, after dropping out of university, Sharie was diagnosed with a particularly severe case of narcolepsy and has been able to support her sleep habit as a test subject for Big Pharma.

And Bebe Gunn, the fastest draw in art class? Is she still drawing flowers in 8 seconds flat? Bebe never lost her artistic flair. She moved to Seattle where she started a company called Millisecond Masterpieces. She takes commissions to draw any requested object in less than a second. She has yet to receive a commission from anyone outside of her immediate family.

Bebe also has a trust fund, an alternative lifestyle haircut, and a cat named Basquiat.

Timid Benjamin eventually gave up trying to correct Mrs. Jewls and his classmates every time they mistook him for Mark Miller. He embraced the new persona in hopes that a cooler name might lead to a cooler life. After graduating from high school, Benjamin (Mark) made the cool decision to delay college and travel the world. He packed his bags and bought a ticket for Barcelona. Unfortunately, airport security officials became immediately suspicious when they saw that “Benjamin Nushmutt” had been crossed out several times on his passport and “MARK MILLER” written above it, with the accompanying Post-it note, “It’s a long story.”

Benjamin was detained for questioning at the airport and missed his flight. He gave up trying to be cool and settled for a retail position at Walmart. He was recently voted employee of the month, which was celebrated in the employee break room with a cake that read, “Congrats Mark!” (No relation to his earlier persona; the bakery just mixed up the order.)

You might remember Paul as the boy who was simply unable to control his urge to pull the pigtails of Leslie, the girl who sat in front of him. After graduating and taking over as head of his father’s advertising firm, Paul pulled one pigtail too many and and got slapped with a sexual harassment lawsuit. Suck it, Paul.

Leslie was a budding businesswoman even at Wayside. That’s how she knew she was getting a bad deal when Louis the Yard Teacher offered to buy her toes at five cents apiece but later recanted his offer, saying only her two big toes were worth buying. After telling Louis to take a hike, Leslie went on to become the CEO of her own successful company, Pigtails, a haircare line for girls.

Todd recognized the value of knowledge all the way back in elementary school. When a pair of illiterate robbers mistook Wayside School for a bank, he saved the day by convincing them that a spelling workbook would be more valuable than the lives of his classmates.

This early encounter with crime had a lasting impact on Todd’s life, and he went on to become a fairly mediocre (though very successful) crime novelist. You may have seen his latest novel, Thyme of Death: A Culinary Caper, in airport bookstores this summer. In his free time, he volunteers at a local prison teaching creative writing. What a guy.

Stephen’s most remarkable characteristic was his hair, dyed bright green by chlorine from the school’s swimming pool. He was also the only student who remembered to dress up for the annual Wayside School Halloween party (which wasn’t on Halloween), to which he wore his sister’s green leotard (to match his hair.) Ever the accidental non-conformist, green-haired Stephen found himself co-opted by the punk movement at his college in the early ‘90s and continues to half-heartedly stick it to the man to this day. He buys his hair dye at Target, but whatever.

Nancy was a boy with lots of anxiety over his traditionally feminine name. Although he once tried switching names with the girl named Mac on the 23rd floor, Nancy eventually realized that gendered naming is an arbitrary practice and embraced his original name. He still gets strange looks when introducing himself to new people, but uses these as teachable moments.

Kathy hated everyone at Wayside School. In fact, she hated everyone, period. The only person she didn’t hate was Sammy, who was actually a dead rat. After graduating with no friends, Kathy decided to take hold of her life and make some changes. She joined an anger management group and did a lot of processing. Turns out she just had a lot of feelings.

More like this
S Club 7’s Jon Lee Continues To Reach For The Stars
By Rachel Mantock
Kimberly J. Brown & Daniel Kountz Looked Back On Their ‘Halloweentown’ Romance
By Stephanie Topacio Long
Jesse Tyler Ferguson Had A Funny Run-In With A Fellow ‘Modern Family’ Alum
By Grace Wehniainen
Drake’s Surprise Performance With The Backstreet Boys Was Fans’ Fire
By Stephanie Topacio Long
Get Even More From Bustle — Sign Up For The Newsletter