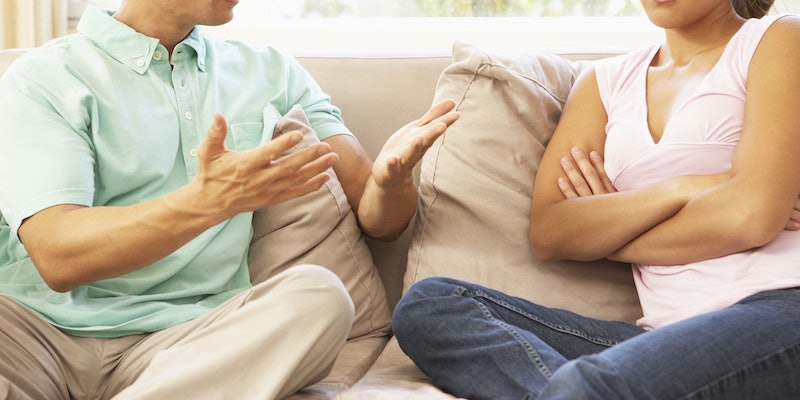 According to redditor throwwwwaway29, her husband sent a spreadsheet detailing about six weeks' worth of his attempts to have sex and the reasons she gave for not wanting to. It seems that over this time period he tried to initiate sex 28 times and was successful only three times. Well, with an attitude like this, it's not hard to wonder why. Her reasons, according to her husband, ranged from being in the middle of an episode of a show to feeling sick to needing to get up early the next morning to some labelled simply as "non-verbal."

Here's the thing, though, the reasons themselves don't really matter. If a person doesn't want to have sex, they don't want to have sex, and that's fine. Being married to someone doesn't mean that sex ought to be guaranteed whenever you want it, or that you even have a right to expect it at all. On the other hand, being married should mean that you respect your spouse's feelings because that's how loving and supportive relationships work. Passive-aggressively sending out spreadsheets of "excuses," on the other hand, is the exact opposite of how loving, supportive relationships work.

Of course, because the Internet is the Internet and Reddit is Reddit, most of the response to this original post was supportive of the jackass husband. Even people who acknowledge that the spreadsheet itself is immature usually follow that opinion up with speculation about why does this wife have so many lame excuses. And then there are gems like this one: "I think what he did is fucking genius, from a married guys perspective. I have had this argument with my wife before, but was not smart enough to document it for proof."

So wives everywhere may soon have to worry about receiving this same treatment. Great.

For the benefit of any guys out there who might be considering this tactic, let me offer you a bit of advice: Don't. Documenting your partner's reasons for not wanting to have sex, especially if they are labelled "excuses," is not some genius strategy that will ensure victory. It's petty, immature, and whiny, and there is absolutely no way to bring it up that would be at all conducive to good communication — you know, that thing that marriage is built on.

If your partner isn't feeling like sex lately try honestly communicating with them, asking them why they haven't been in the mood much in a while, and then really listen to the answer. Be supportive. Be understanding. Don't be childish. And don't act like sex is this thing they are supposed to give you, because newsflash: no one owes you sex, ever.

To see the spreadsheet for yourself, including the fact that this delightful husband italicized the times that they did have sex, click here.