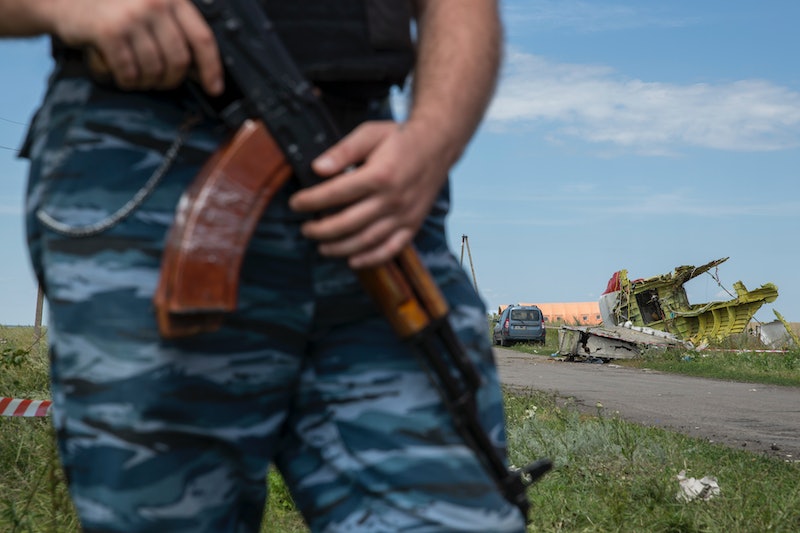 The site of a downed Malaysia Airlines flight heading from Amsterdam to Kuala Lumpur before it was struck by a missile on July 17 continued sparking international outrage on Sunday as disputes over the handling of the crash site intensified. The Netherlands, the U.S., the UK, and Malaysia all started pointing fingers at Russian President Vladimir Putin for the mishandling of the MH17 crash site on Sunday. The crash site was called "severely compromised" by Maksym Murbak, Malaysia's transport minister, according to USA Today.

Malaysia is very concerned that the sanctity of the crash site has been severely compromised.

And criticisms of the handling of the crash site kept mounting. Separatists reportedly had control over the bodies recovered from the wreckage on Sunday, most of which have been moved into refrigerated train cars and locked up. No one seemed sure of what would become of them, according to reports, which is especially enraging the Netherlands. Most of the people killed in the MH17 crash were Dutch citizens.

Images and videos from the crash site have showed separatists, locals, and even journalists rifling through the flight victims' personal belongings. In some photographs, villagers apparently lifted shrouds to take photos of victims' bodies. In photos the site, which is very large, did not appear to be entirely secure or protected, which journalists on site have confirmed. In an investigation of a plane crash, parts of the plane and their locations, as well as the bodies of victims, are supposed to be carefully recorded and preserved as much as possible so experts can figure out exactly what happened.

But Times reporters on the scene called those at the crash site "mostly well-meaning," despite the disorganization at the site.

The Netherlands' Prime Minister Mark Rutte said in a statement that the way bodies and victims' personal effects were being treated was horrifying, according to The New York Times.

Swift recovery of the victims’ remains is now an absolute necessity and our highest priority. I am shocked by the images of completely disrespectful behavior at this tragic place. In defiance of all the rules of proper investigation, people have evidently been picking through the personal and recognizable belongings of the victims. This is appalling.