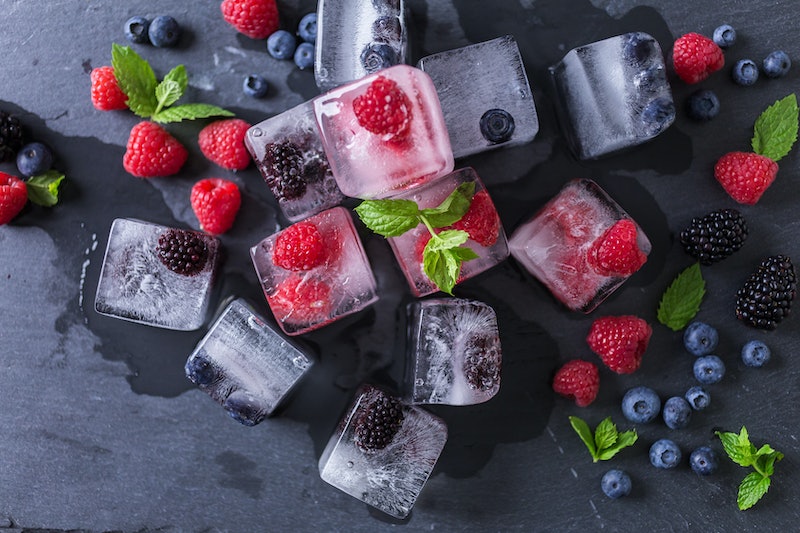 For years, I've been mocking The Lusty Ice Cube in magazines. It's sort of my go-to for when I feel like poking fun at overwrought foreplay tips. You know, just stick a whole bunch of ice in your mouth; dudes love ice on their junk. Just get it all up in there, get it reallllly chilly for 'em. Yeah, go for it.

I still think it's a ludicrous idea — I mean, one of the best parts about sex is how WARM everything is, no? But, hey, it's been a hot summer, and I live in a sunny, top-floor studio apartment, and the window-unit AC can only do so much. Plus, I've been meaning to buy an ice-cube tray since, like, October. It will be nice to cease cooling off all my drinks with whiskey rocks.

So, I decided to give it a whirl — this ice-cube foreplay thing. My boyfriend and I tried a whole bunch of ice-cube foreplay things, culled mostly from Cosmo. (I looked at other sites; these, however, were fairly comprehensive and more our speed than... some other corners of the internet (yikes).) I did this for you and for science and just a teensy bit for my electric bill.

After doing a ton of research, we decided to focus mostly on two stories from Cosmopolitan and Cosmopolitan Philippines. Overall, we used ice cubes 13 ways during about an hour of foreplay. Rather than running down the lists in order (because how rude would it have been for me to spit out his dick and go, "OK, next up, scalp massages!), we selected moves we were comfortable with and organized them according to phases that felt natural to us: kissing, touching, and oral.

We turned the air conditioning off in the hour leading up to the experiment. I recorded observations on my laptop between every act, except near the very end, because, you know, oral.

A blanket and pillow — this was definitely a floor-sex occasion

A hand towel, which was readjusted strategically throughout

A mug of warm water, so my mouth and fingers would only be cold when they were supposed to be

Eucerin, a paper plate, and a microwave (in lieu of massage oil)

Our kissing phase covered two sex tips, and one of them isn't even technically kissing, but close enough.

First up, the freeze tease from Cosmo Philippines :

At a bar or restaurant, slip a slender ice cube entirely into your mouth. Suck on it in a casual way ... allowing the edge of it to peek out between your lips occasionally.

Two thoughts on this tip: per my boyfriend, "I think the hot part is the being-in-public... not the act itself." Also, when they say slender, they mean slender. There was also this horrible slurping sound? Verdict: giggly, surprisingly difficult.

Next, we tried Cosmo's ice-cube kiss, which entails passing an ice-cube back and forth between your mouths and, troublingly, this:

As it gets smaller and smaller, hide it in different places so he has to try to find it with his tongue.

"Hide it? Like, behind the fridge?" quipped my beloved. This was sort of fun once the cube had shrunk a little bit; it was also almost fatal when I lunged for the cube and almost lodged it down my partner's throat.

It turns out that the vast majority of things you can do with an ice cube entail sliding it down your partner's body one way or another.

We started with Cosmo 's cube-and-tongue combo, which, as it sounds, entailed tracing my boyfriend's body with an ice cube and then my tongue. To enhance the temperature difference, I sipped from a mug full of hot water. As soon as the ice touched my boyfriend's torso, he yelped — it tickled a LOT — but the legs went much more smoothly.

We tried a few variants on this — one take-it-into-your-own-hands tip from Cosmo Philippines, where you run the ice over your own body and get your partner to lick the cold spots. Having control of the ice cube definitely helped me to stay straight-faced, but this just wasn't that interesting? I don't know.

We also went off the books for a minute, and improvised with what I'll call the two-hands-on-deck: I tried touching myself while my boyfriend used the ice cube on me, and then asked him to touch himself while I ran the ice cube all over him. This was easily the sexiest of the full-body ice-cube situations — it felt really decadent, and hardly tickled at all.

I had him draw circles around my breasts and draw lines up and down my feet with ice cubes, per Cosmo . Both felt nice, but intense (so cold, so ticklish). I could only bear the sensation for a few seconds.

Next, we moved onto a neck-and-scalp massage (again, Cosmo ); I rubbed my boyfriend's scalp with one hand and, with the other, traced his hairline, temples, and neck with an ice cube. The drippiness was straight-up unpleasant, like early-stage water torture. It would have been much better with those plasticky reusable ice cubes.

We also toyed around with some back massage variants, the most interesting of which was this hot-cold rubdown from Cosmo Philippines . Because we'd misplaced our massage oil (it's around here somewhere), I stuck some Eucerin in the microwave on a paper plate for five seconds. Bootleg, perhaps, but it totally did the trick! The massage itself was kind of a bust, though; the lotion and melted ice made a mess, and I accidentally scratched my dude's back with a jagged section of ice. That is why it's important to let the cubes freeze all the way through before playing. Boyfriend's verdict? "I liked the hot part better."

Hello to all the minxes who promptly scrolled down to this section!

We kicked this off with two tips from Cosmo Philippines : first, the frosty figure-eight, or tracing a figure-eight on your partner's inner thigh with an ice cube while giving head. I found this to be not unlike patting one's head and rubbing one's stomach at the same time, but it went over well enough. On the receiving end, I found it enjoyable but distracting, and I didn't like the water pooling under my legs.

A better success: the suck-and-blow (which Cosmo P. calls "melt in your mouth," but I am rechristening it), where you suck on an ice cube for 15 seconds before going down. We both agreed that it felt nice, but not super foreign. It's not like I've never had a glass of water before oral before, ya know?

American Cosmo encouraged my dude to use an ice cube for stimulation while going down on me, which was surprisingly pleasant, as long as he kept it moving. To reciprocate, I crushed an ice cube in my mouth, and provided him with a slushie beej, which was a hit, if I do say so myself.