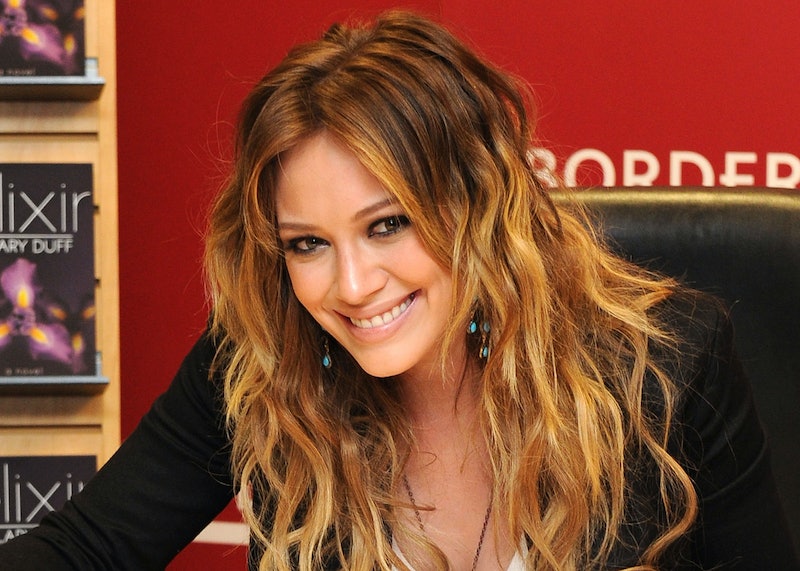 It feels like we've been talking about Hilary Duff's big musical comeback for roughly six hundred decades now (in reality, it's only been a couple of years), but it looks as though it's finally, actually happening. On Thursday last week, VOSS NYC posted a promotional flyer to Twitter stating that Duff will be "celebrating the lead single from her upcoming studio album" at a special event taking place this Thursday, July 24. That's, like, three days away! Please excuse me while I mash my keyboard in excitement.

So, does this mean that Duff will be premiering her new single with a live performance? Or will the venue just play the song while she sips champaign in the DJ booth? Will fans be able to buy Duff's new track on iTunes and other digital retailers before the event? Or will she simply show up on Thursday night, announce the single title and release date, and then drop the mic and walk off stage? The official Facebook page for the event clears things up a bit by calling Thursday the "world debut" of Duff's new single, so it seems like we're definitely going to hear the song one way or another, though it's still unclear when it will become available for purchase.

Now, for the question on everybody's mind: What will Duff's new single sound like? Well, unless something's changed, we know that the song, which is rumored to be titled "Chasing the Sun," was co-written with British singer-songwriter Ed Sheeran. That's awesome. Sheeran showed the world with his latest studio album, X, that he's a diverse, ridiculously talented musician who's capable of writing so much more than just sweet love songs (not that there's anything wrong with sweet love songs — I just want Duff to return with something a little more upbeat).

Additionally, a music industry insider recently called the track "catchy" and compared it to something Sheryl Crow or Colbie Caillat might release.

In other words, it might have that "adult alternative acoustic" vibe that Sheeran was talking about last month. Rats. Honestly, I'm still not sure that that's the right musical direction for Duff's comeback, but I'm trying to keep an open mind.

Just think: In a few short days, our seven-year-long Duff musical drought will come to an end. It's been a long road, but we finally made it. Will the Duffster's new single leave fans clamoring for more? Or will it have them longing for the good ol' days of "Come Clean," "Wake Up," and "With Love"? We'll know the answers to those questions very soon!