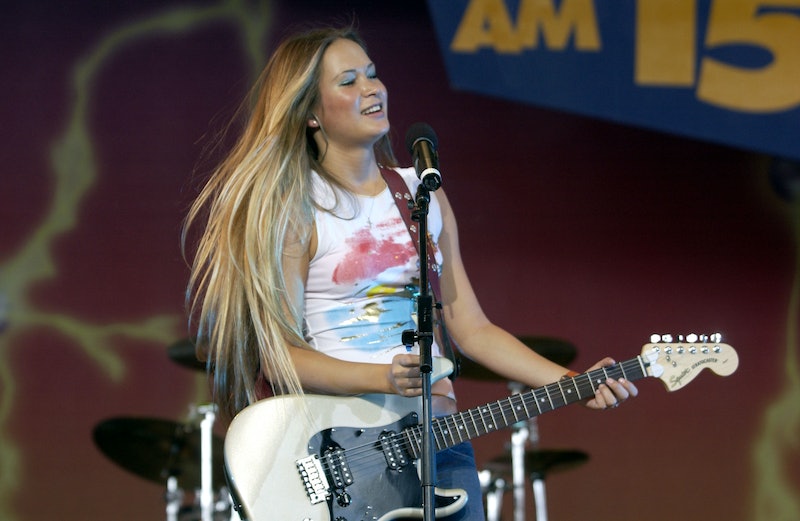 Guys, remember Hoku? Of course you do! She was the blonde Hawaiian pop star who was super popular to use on movie soundtracks at the turn of the millennium. She wore tank tops from the Alloy catalogue! She accessorized her hair with Hibiscus flowers! She sort of looked like Leelee Sobieski! You wanted her life so badly at the time, however, most of the aughts transpired with a distinctive lack of Hoku. Where the heck has Hoku been for, like, the last 10 years?

We were first introduced to her when Snow Day came out in 2000, and her single "Another Dumb Blonde" was released. We heard from her next with the slightly more popular single "Perfect Day" from the soundtrack of Legally Blonde. Sure, you would guess that "Perfect Day" made much more sense for Snow Day, and "Another Dumb Blonde" would have fit better on the track list for Legally Blonde. It could've just been a timing thing, but this just seems like a big no-brainer. Maybe that was the nail in the coffin of her career.

At least at the time, this premise-swap worked for Hoku. She was a hot movie theme song artist for a couple of years there, but since then, she seems to have dropped into utter oblivion. How could that have happened? Her career seemed to be on the upswing, and then poof! She disappeared into the annals of two-hit-wonder history. It appears that Hoku has opted for a much more low-key life as an alternative to the pop star limelight. Specifically, she has a child and is married to her former manager.

Before we get into present-day Hoku, let's remember how we became acquainted with her. The video for her 2000 hit "Another Dumb Blonde" displayed her versatility in dealing with polar climate shifts. One moment, she's on a Pacific beach, the next she's trouncing around in fake snow. From the looks of this video, she's no dumb blonde... she's actually miraculously well-equipped for change in the weather.

Her 2001 single "Perfect Day", from the Legally Blonde soundtrack was a huge hit. Hoku had made it. She and Elle Woods were basically doing the same thing every day.

However, this entire time, Hoku was said to have struggled with the way that her record company, Geffen Records, wanted to market her. In a 2001 article in People, Hoku was quoted saying, "It's not very comfortable for me to be a sex symbol, especially because of my faith." Something you may not know about Hoku is that she's a Pentecostal Christian, which is a strict sect of evangelical Protestantism. Basically, not even the Illuminati was gonna convince her into selling her soul and taking her top off!

After a short-lived second try at the record biz with her 2007 EP Listen Up, Hoku pretty much stopped making music. "Perfect Day" was reprised in 2008 by the Clique Girlz and used in a recurring Beaches Resorts commercial.

Since then, it appears that Hoku has been living with her husband and former manager Jeremy Clements. They married in 1999 when Hoku was just 18 years old. Yep, so basically the whole time she was singing to us, baby girl was married. Currently, her name is Hoku Ho Clements. Not to mention, her highlights have grown out into her apparently natural brown hair color, so she can no longer lay claim to being another dumb blonde. I just blew your mind, didn't I?

Hoku started a Twitter in 2009, but hasn't tweeted since then. We do know that she and her hubby have an adorable child named Téa. In 2010, Hoku was super diligent about updating her baby blog, and was living with her husband in California. (You can see Hoku and her happy family here! That's Hoku in the second picture, all the way on the right.)

Since Hoku posted photos of her baby on her blog in 2010, we can guess Téa is about four or five now. Don't they just grow up so fast? Well, the babies grow up fast, of course, but mostly I'm talking about Hoku!