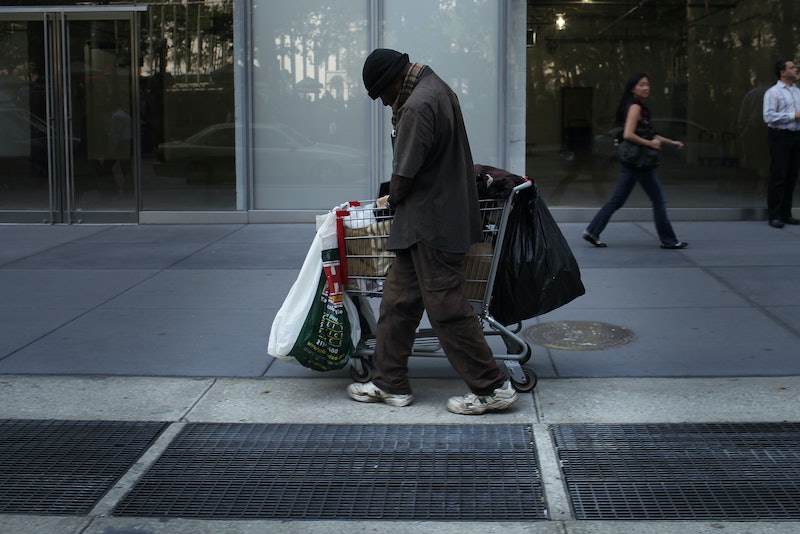 It's getting harder and harder to be homeless in America. That's the big takeaway from a new report from the National Law Center on Homelessness and Poverty (NLCHP), which shines some light on the increasingly frequent ways U.S. cities are effectively outlawing the homeless. How so, you ask? By implementing laws that specifically target the things homeless people need to do, on a daily basis, to survive.

It highlights a grim state of affairs, and one that's especially hard to stomach amid the economic struggles of the last several years. The findings, drawn from a survey the center performed, found that anti-homelessness laws have become distressingly common since 2011. As detailed by Huffington Post, legal bans on a wide range of behaviors virtually unavoidable for the homeless — camping in public, asking for money, sitting or lying down in public, and even sleeping inside cars — are on the rise.

The result, the report says, is an American landscape that's becoming increasingly hard for homeless people to navigate without interventions by the police, enforcing restrictions on where they can and can't be seen or heard. Maria Foscarinis, director of the NLCHP, spoke in a press release about the burdens taken on by the homeless community.

There is a severe shortage of affordable housing and a lack of emergency shelter options in our communities, leaving homeless people with no choice but to perform basic acts of survival in public spaces. Despite a lack of any available alternatives, more cities are choosing to turn the necessary conduct of homeless people into criminal activity.

Here are some of the report's troubling findings, and some of the kinds of laws and places it's talking about.

For example, supervisors in sacramento County recently approved a new anti-panhandling ordinance, ostensibly to prohibit so-called "aggressive panhandling," but actually going further than that. It banned the homeless from asking for money at all street medians, banks, near ATMs, or gas stations, according to the Sacramento Bee.

The Sacramento Homeless Organizing Committee struck back at the County, filing a lawsuit last Thursday, and are being federally represented by the ACLU.

Over in Camden, for example, this wasn't exactly a ban on public camping, but simply the breaking-up of one of the main means for the city's homeless population to get by. Up until the middle of May, Camden was home to several "tent cities."

Then the city of Camden moved to shut the encampments down, on health and public safety grounds, papering them with warning fliers for weeks before moving in and rooting out the shelters, leaving dozens back out on the streets with no fixed location. One 46-year-old resident named Todd, who had no sense of where he'd go next, was quoted by CNN Money: "We're screwed."

Here's the thing about the human body, as the NLCHP's report references directly: "every human being must occasionally rest." But in spite of that fact, some cities enact laws to bar the homeless from doing just that — sitting down or laying on a bench, for example.

San Francisco, a historically liberal city with a major homeless population, is just one such example. As the San Francisco Chronicle reported, the sit/lie law which the city enacted in 2011 isn't equitably enforced, with more than two-thirds of all citations handed out in the city's famous Haight district. And as anybody who visits Dolores Park on a weekend knows, there's a lot of people sitting around who aren't homeless, too.

Bans on Sleeping Inside Vehicles Rose By 119 Percent

Of all the laws making day-to-day homelessness harder, bans on sleeping inside cars might be the most upsetting. Telling somebody who hasn't got a home that they can't sleep in the one proper shelter they do have? Not a humane course of action, whatever the motive.

This is precisely the homelessness solution the city of Palo Alto, California embraced. In August 2013, the city council passed an ordinance which illegalized the use of cars as dwellings, as the San Jose Mercury News reported, despite emotional testimonies from homeless residents begging to the contrary. Despite embracing the plan, however, the council voted to suspend the ban's implementation for one year in December, pending a 9th Circuit Court of Appeals ruling over a similar law's constitutionality.