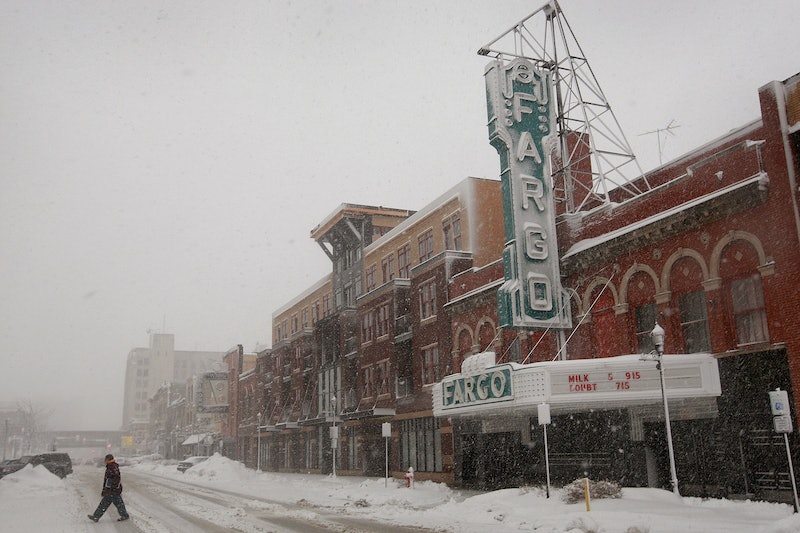 So! Exciting news out of FX, their Emmy-nominated series (18 times over holy JEEZ), Fargo, has been renewed for a second season. And just like American Horror Story and True Detective before it, the anthology series is set reinvent itself in its second run. Naturally this got us thinking about the Coen Brothers universe and what sort of characters — and actors — I'd like to see in it.

Now, given that the series is centered around true crime where the truth is crazier than any sort of fiction — there are many, many places this could go. As bumbling as Martin Freeman's Lester Nygaard was compared to the smart-as-a-tack cop Molly Solverson (Allison Tolman), I'd sort of love to see the roles reversed heading into season two. Meaning: let's get a really in control, too-smart-for-her-own-good female criminal in the driver's seat and a ne'erdowell, neurotic cop type to take her down. That, to us, would be the ultimate.

And who do we think would be the perfect sort of magical weirdos to really make this soar? Particularly after a super-impressive first season? Some ideas, below, my fair friends!

Obviously nobody does television acting better than Tatiana Maslany, star of Orphan Black. (That's not an opinion so much as it is scientific fact.) And did you know that our sestra here actually got her start not in drama, but improv comedy? True story! We saw a little bit of that during her all-too-brief stint on Parks and Recreation, but we'd absolutely adore to see it played out against that chilling North Dakota/Minnesota backdrop. Imagine Helena meets Allison Hendrix. You're SO into it admit it. Don't fight it.

You know someone who has, bafflingly, not had much crossover success from beyond the pond? Olivia Colman. You know who is totally hilarious and has the sort of comedic timing mixed with dramatic seriousness (thanks, Broadchurch) that would fit RIGHT at home in the Coen Brothers universe? Olivia Colman. Somebody, please, think of Olivia Colman.

Elizabeth Moss is going to be doing a bit of wacky weirdo comedy with Mark Duplass in The One I Love (to which we are very much looking forward). Given her Peggy Olson roots, neurotic niceness feels as though it would come quite naturally to the actress, and because of that we think she'd do quite well on a series such as Fargo. Give us Elizabeth or give us death!

Goodness gracious Aisha Tyler is so goddamn funny. And smart! And did we mention funny? We imagine her kicking comedy ass in the sort of role that Kate Walsh helmed in season one of Fargo — no muss all fuss and a hell of a lot of sass. Oh! Or maybe even a cop ala Allison Tollman? She does know how to handle her way around arrogant macho-dude types (hello, Archer). Either way, Aisha Tyler? A+ addition to the Fargo world if we do say so ourselves (and we do)!

Hard-nosed as she is on Sons of Anarchy, if you never caught her on Married With Children then you are seriously missing out on the dexterity of Katey Sagal. A woman who can kill and also be sort of a character? YUP. So on board with Sagal doing season two.

I know, I know: never going to happen because Game of Thrones. BUT HEY a gal can dream, right? Dinklage, who is just stupid-good in everything he does, would bring such a barrel of laughs to any character of Fargo that we don't even care to cast him in a particular role. Just get him on there. Please? Thanks.

Oh my goodness, things that I want right right now: Richard Ayoade to break open and create beautiful chaos on the American comedy scene. His off-kilter and deliciously delirious sense of humor would be perfect in something Coen-sy. Particularly if he gets to bumble. Hey, guess what? I think we just found our cop!

Not to get all super-Brit-obsessed on everyone, but Matt Smith is a delightfully odd duck. Can't you just see him gangling about as a viciously intelligent villain-y type? With that Minnesota nice to boot? You're into it — admit it!

As soon as I put this name on the list I had to go back and double-check to make sure Helms didn't have a bit part in the series that I missed because ED HELMS WAS BORN TO LIVE IN THIS TV WORLD. I mean, seriously. He may be from Georgia but there is something about him that is so perfectly midwestern and kooky that it feels as though he would be well-at-home in a Coen Brothers, well, anything.

Did you know Chiwetel can be funny? It's not all prestige drama and Love Actually over here: the man can tackle damn near anything. I mean shoot, he played Lola in Kinky Boots (the movie, pre-Broadway musical! HE CAN DO ANYTHING. And therefore he must, must, mustmustmust join the cast of Fargo. We bet he can be quite funny, don't you? Don't you want to give him the chance? Please? Pretty please? With a cherry on top? I MEAN REALLY THOUGH.