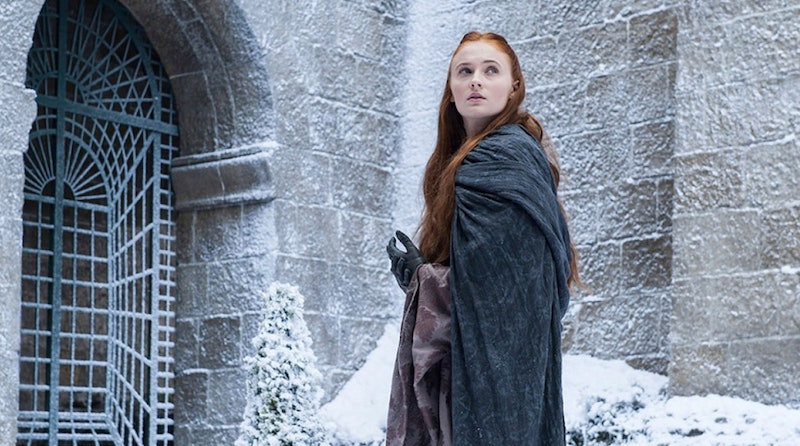 Look, Sansa Stark is a badass. She may not dream of being a warrior like her sister Arya, she may not ever actually make it to the throne (at least so far), she may not have dragons or a cool motto about championing "cripples, bastards, and broken things" like Tyrion. But the eldest Stark has grown exponentially since we first met her, and in really subtle, brilliant ways. Game Of Thrones ' own Sophie Turner is, predictably and wonderfully, perfectly willing to go to bat for Sansa, as evidenced in a new interview with Nylon.

Turner's take on Sansa — which we will get to throughout this, so just be patient — take us on a nice walk through her character's history on Game Of Thrones. It's certainly been a bumpy one, with far too much King Joffrey and physical and emotional torture for comfort. So let's take a look at it linearly — let's travel together through what Sansa was when she first met her, to what she is now. It's a slow but steady — and altogether intriguing — journey.

When we meet her she's:

Sansa Stark throughout most of the first season would be just as at home in Mean Girls or Glee as she is in medieval-styled fantasy — maybe she'd have even been more at home there. Her major motivations included winning King Joffrey's heart and being his queen. She was a kid.

She wasn't exactly popular then, and it's something that hit Turner hard:

I think it’s because people see their own faults in her character, and they don’t like facing their own weaknesses. I think if anyone was a 13-year-old girl put in her situation, they would probably act exactly the same. When I was younger, Maisie, who plays my sister, and I were in scenes together and people loved her character and they hated mine, and it really used to affect me.

A Member of the Court

She is, for a brief while, getting everything she wants: Betrothed to Joffrey, constantly hanging around her prince and the queen. Of course, things took a turn pretty quicky:

Sansa continues to be a member of the court, but once her father's killed near the end of Season 1, things change drastically. Sansa no longer wants this Lannister life — she wants her family back. You can see it in her eyes when Joffrey flaunts her father's head in front of her (she almost pushes him to his death), and you can practically hear the gears ticking away as she continues to observe these people — this time biding her time, figuring out how to survive and game the system as the entire kingdom goes to war around her. She wasn't that shallow 13-year-old anymore: She had a steel in her only forged by experience and intelligence.

I really like the fact that [Sansa] is quite a silent character. If she had spoken up in court at any point she would have gotten herself killed. She is being compliant with the people she hates just so that she can bide her time and then she can actually get her own back. It’s fun because then a lot of the acting is in the face, and not in the words, which is nice for me to experiment with.

She obviously didn't want to marry Tyrion — and despite the popularity of his character you can hardly blame her. Neverthless, it was interesting to watch her adjust to a new role (and a little bit more distance from Joffrey). She and Tyrion had an interesting, sometimes even close dynamic, though it wasn't exactly helped along when his family kept on murdering hers.

This season of Game Of Thrones brought perhaps the biggest Sansa Stark movement since season one: She got to leave King's Landing. As Turner said:

This season has been really good for me because Sansa has gone from a vulnerable 13-year-old girl, and she is transformed. She has been learning from all these people at court on how to manipulate others and she is actually putting it into practice now. She is becoming a bit of a dark horse. I had this scene in the most recent episode where I had to lie for Littlefinger during his trial, and at the same time, I had to put on a convincing performance. It was quite difficult but it was a lot of fun. We had a great time filming.

We've still got an infuriatingly long time until we reunite with Sansa in the next season of Game Of Thrones. But reveling in a character's development can be pretty great regardless — especially with a story like Sansa's. Haters out the moon door, please.