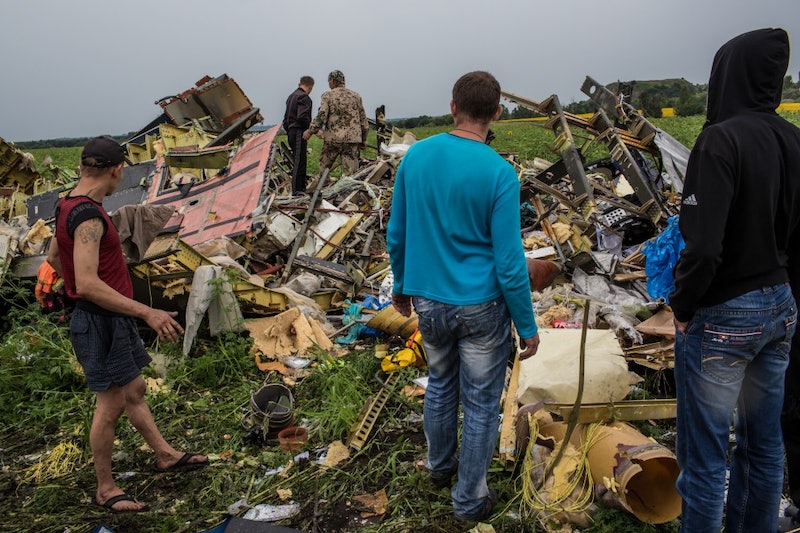 On Monday, pro-Russian separatists from eastern Ukraine gave the black boxes from Malaysian Airlines Flight MH17 to the Malaysian government. The separatists continued to blame the Ukrainian government for downing the flight and agreed to grant an investigative team safe access to the crash site, which lies in rebel territory in eastern Ukraine. A Malaysian official confirmed during the exchange that the black boxes were still intact.

“Here they are, the block boxes,” said senior separatist leader Aleksander Borodai as one of his underlings placed the boxes on a desk at a rebel headquarters in Donetsk. Borodai added that they were handing over the black boxes “to show the Malaysians that we are so serious that these things be recovered for Malaysia.”

Borodai is the self-proclaimed Prime Minister of the Donetsk People’s Republic, a region in Eastern Ukraine that’s controlled by pro-Russian rebels. When handing over the boxes, he denied that the rebels had any role in downing MH17, and claimed that the Malaysian government’s acceptance of the boxes amounted to de facto diplomatic recognition of the Donetsk People’s Republic as a legitimate state.

The black boxes contain data and voice recordings from flight MH17 taken prior to its downing by a missile last Thursday. While the date could well provide insights into what was going on during the last moments of the flight — for example, if the pilots detected the missile before being hit — it won’t reveal anything about who fired the missile.

The rebels place the blame squarely on the Ukrainian government, but the vast majority of available evidence, including now-deleted posts on social media, indicates overwhelmingly that the separatists themselves were responsible for firing the missile. Russian President Vladimir Putin, in turn, has faced massive international criticism due to his tacit and material support for the rebels during their months-long battle with the Ukrainian government.

Meanwhile, the bodies of the victims of the crash have been loaded onto a train and are being transported to Kharkiv, the largest city in east Ukraine, where they will then be flown to Amsterdam. The rebels had been criticized for allowing the remains to sit in the sun unprotected for three days before taking steps to move them; at this point, the bodies are beginning to rot, which could impede the investigation.