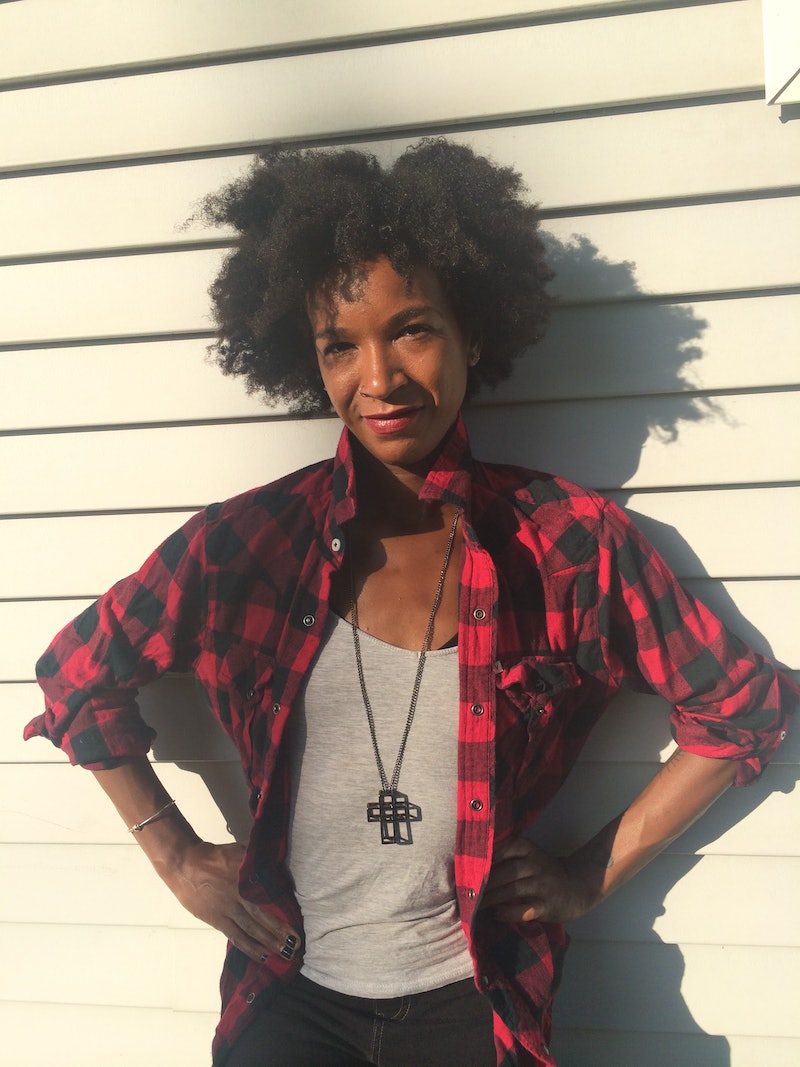 I always fear that I will have to stop a hook-up. I fear that I will feel petrified, then over-think it for a good 10 minutes before I finally say the words: I don't want to have sex . This fear is heavy; it sucks up any and all enjoyment until I've said no. And unfortunately, not everyone takes no for an answer. When I moved to London at 19, I had more knowledge than most of my peers about sexual assault. I had volunteered with the Planned Parenthood and at my campus women's crisis center. I thought I was completely prepared to not only defend myself in the event of an attack, but also cope with any aftermath should I ever be the victim of a sexual assault. Then my 20th birthday came, and I wasn't.

London was an instant party. Liquor stores and most pubs closed by 11 p.m., so there were plenty of raves and after-hours parties where the drugs were as plentiful as the sketchy dudes.

I had taken up with an American several years older than me, so I was fairly content to avoid the overwhelming night life scene and get drunk at his apartment on fine wines as we smoked hashish.

But the night before my birthday, my roommate and I were determined to do something outrageous by the time I turned 20. We had met a few friends on the bus a few nights before who promised they knew where to get the best booze and the best drugs. We agreed to meet up with them.

The paranoia of being attacked again disguised my sadness, but it would eventually leave me open and exposed to the very thing I feared the most — being raped again.

Our new friends had a driver waiting for us who took us to various bars. I sipped my first drink naively, not knowing it contained a date rape drug that would have me blacked out before my last sip.

It only took a few seconds of morning light before snippets of the previous evening came rushing up from the pit of my stomach and out of my mouth, leaving me half-naked in my own vomit. No, this was certainly not how I had expected to celebrate my birthday.

I didn't need to inspect my hurting and somewhat bruised body to know that I had been raped. To make matters worse, when I rushed to check on my roommate, I realized my attacker and his friend were sleeping soundly in the room we shared. When he woke up and asked me to show them where the tube was, I agreed. I couldn't stand him being in our space, in the room that I had come to know as my own home. I just wanted him out.

I spent my birthday wandering around the foreign city in a haze. I felt overwhelmed with the distance between my assault and the resources available to me at home. The bits and pieces that I did remember from the evening made me physically ill. I knew immediately that I wouldn't report my attack. And I was OK with that.

For the most part, I behaved normally my last two weeks in the U.K., with the exception of missing my finals and crying after sex with the man I had been seeing before my attack.

Once I arrived back in the States, I decided to force what had happened to me to the back of my mind. I don't know that I ever truly thought the attack was my fault, or that I ever regretted choosing to not go to the police. None of it mattered. My trust in the world was broken.

I checked to make sure my doors were locked constantly. I could barely walk down the street late at night. I was obsessed with the thought that it could happen again.

Like many survivors, I chose to self-medicate with alcohol and drugs in order to mask what was really happening. Many of my friends knew of my attack, but they weren't professionals, and if anything, they were counting on me to have the answers. Often, it was the people closest to me who told me to "get over it."

So I tried to do just that, mainly by hurling myself into a downward spiral for the next two years. When drugs didn't help, I took another popular route of survivors and turned to self-harm. At this point, most of my friends were sick of dealing with my erratic behavior, so I could continue my path of destruction sans interference.

When I graduated from college, my parents, who I kept in the dark on the topic of my sexual assault, strongly encouraged me to come home. Instead, I couch-surfed for the summer and sometimes lived out of my car.

The real fear came when I shut my eyes. Because I had been blacked out during my previous attack in London, I never felt safe asleep. I would try to wait out the night, finding that sleep only brought night terrors. The paranoia of being attacked again disguised my sadness, but it would eventually leave me open and exposed to the very thing I feared the most — being raped again.

I wasn't under the influence of alcohol or a date rape drug when I was assaulted the second time. After I repeatedly said no, I froze completely and allowed my mind to leave my body, afraid of escalating the situation with more violence.

My rapist was an acquaintance who I had opened up to about my previous sexual assault. It might seem unbelievable, but as it turns out, women who have been raped previously are seven times more likely to be raped again. Sexual predators seek out the vulnerable, and I was definitely at rock bottom.

I cannot explain the rage that I felt waking up the next morning. I don't believe I have ever been so filled with anger in my entire life. It was the first time I had felt a true, sober emotion since my 20th birthday. I knew I had a lot of work to do now. I needed to get my life back together, and I needed to do it before it got away from me. I did not report my second attack either. I didn't even consider it. My only focus was to feel like myself again.

I tried therapy and talking with my friends, but found it was easier not to discuss it. I let my poetry become my healing process, a productive change from my previous coping mechanisms.

Oddly enough, the healing process was much easier for me after my second attack. I felt that I had faced my fear somehow — being raped again — and I had lived through it. I was still here. Since I didn't report either attack, I was aware that I was the only one suffering. I had survived physically, and now I needed to learn to survive emotionally.

A few years later, I still casually checked the locks of my apartment too often, but I was starting to slowly resemble a stable adult.

I hadn't volunteered in years. Before my rapes, helping women was a major focus in my life. So I decided to join the Boston Area Rape Crisis Center, where I became a hotline counselor. The 40-hour training was emotionally draining, but it proved to be the healthiest and cheapest treatment I could have asked for.

I was in the company of doctors, lawyers, and other survivors. I hadn't realized that I was suffering from post-traumatic stress, or how common that was for survivors of sexual assault. I wasn't weak for not being able to deal with what had happened to me — in fact, I was incredibly normal.

Sexual assault need not be violent for it to occur. It can be so quick that it's over before you even realize that you are now part of the growing number of women raped daily throughout the world. When people marvel that I am able to volunteer with survivors, I can't help but laugh a little. I don't do this work because I want to. I do it because I have to.

When someone thanks me with a tear-stained face, I know that the violence I encountered on my 20th birthday was not in vain. Still, I find myself increasingly detached from what happened to me, remembering it as if it was a movie I had seen a long time ago. Time, perspective, and age have afforded me this luxury.

There is something unique about having to fight for your life. For me, it has made me incredibly vocal about what I want, and what I will and will not tolerate in relationships and interactions.

It took me longer than I thought it would, but eventually, the nightmares and shame have disappeared. They have been replaced by a confident resilience and a fearless attitude that there is nothing that could ever permanently knock me down. I am no longer a victim of sexual assault. I am a survivor.

Editor's Note: If you have been a victim of sexual assault, you are not alone. The National Sexual Assault Hotline can help. Call 1-800-656-HOPE.

More like this
25 Inspiring Quotes From Black Women To Celebrate Black History Month
By Kyli Rodriguez-Cayro and JR Thorpe
6 Anti-Police Brutality Organizations You Can Support Right Now
By Syeda Khaula Saad and JR Thorpe
24 History-Making Black Women You Probably Didn't Learn About In School
By Ayana Lage and JR Thorpe
These Artists Are Reimagining Black History Month To Create A Better Future
By Katie Mitchell
Get Even More From Bustle — Sign Up For The Newsletter
From hair trends to relationship advice, our daily newsletter has everything you need to sound like a person who’s on TikTok, even if you aren’t.