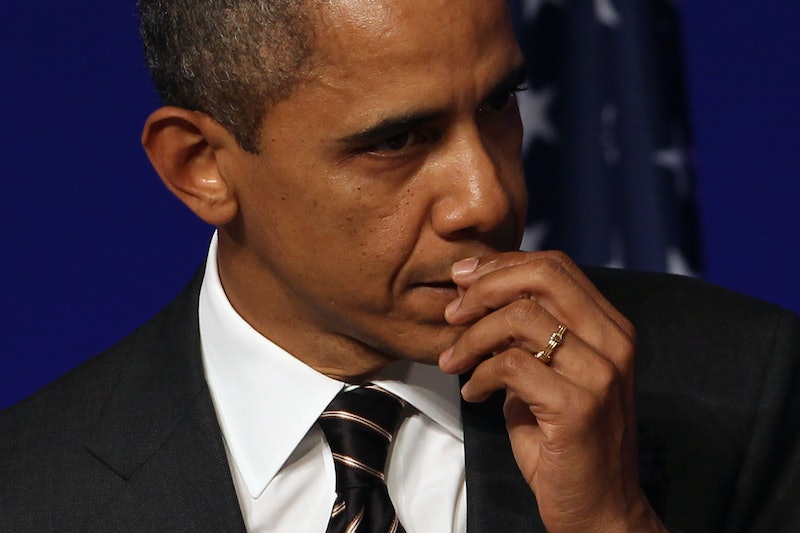 (UPDATE: Another ruling has just been announced on the same issue, with the U.S. Court of Appeals for the Fourth Circuit siding with the Obama administration, and striking down the challenge to federal subsidies. This further ensures the legal battle will continue, and as Politico observes, this high-profile disagreement between two courts could presage the case being taken up by the Supreme Court.)

If you thought that Obamacare was safe after the Supreme Court upheld its insurance mandate back in 2012, well, there's always another pitfall lurking around the corner. A D.C. court ruled against much of Obamacare's subsidy system Tuesday, a decision which could endanger the entire healthcare law if it goes unreversed. In a three-judge panel's 2-1 decision, the court ruled that people buying insurance through federally-run health care exchanges weren't eligible for subsidies, only citizens doing so through state-run exchanges.

Basically, it's a major legal challenge to the law's implementation, and it's made possible in large part thanks to — you guessed it — deliberate and calculated Republican intransigence.

Here's how it goes: Conservatives, by and large, oppose President Obama's signature legislative achievement so stridently that dozens of states under GOP control have refused to set up state exchanges — we're talking 36 in total. That means citizens of those states who want to sign up for health insurance have to use the federal system, through Healthcare.gov, instead.

How The Ruling Lines Up With These 36 States' Decisions

By this ruling, those Americans lose access to the subsidies that make their insurance affordable — because they're not buying it through the same state exchanges that the Republican Party made damn sure wouldn't exist. Clever trick, huh?

The potential for the ruling to dramatically disrupt the law and yank away coverage from millions wasn't lost on Judge Thomas Griffith, who ruled with the majority:

We reach this conclusion, frankly, with reluctance. At least until states that wish to can set up Exchanges, our ruling will likely have significant consequences both for the millions of individuals receiving tax credits through federal Exchanges and for health insurance markets more broadly. But, high as those stakes are, the principle of legislative supremacy that guides us is higher still.

It Depends On How You Read The Obamacare Legislation

In truth, you can't make out Democrats to be entirely blameless in this ordeal, either, as the ruling boiled down to a matter of textual interpretation. The language explicitly in the text of the Affordable Care Act states that "an exchange established by the State" would be eligible for such subsidies. A subsequent IRS rule stated that in fact, consumers using both state and federal exchanges were eligible, and the Democrats have long argued that the passage amounts to a drafting error — that the subsidies were meant to be available for anyone who used the exchanges.

As MSNBC's Adam Serwer points out, both Sen. Harry Reid and Rep. Nancy Pelosi filed an amicus brief to this effect, arguing that the bill's intent was always to use the subsidies to help expand coverage. Conservatives have argued the bill's language was meant to pressure states into setting up the exchanges, lest they lose out on the money. In a way, this argument is betrayed by the tact the GOP was taking at the time of the bill's passage — all that yelling about how many pages it was, and how nobody really read it, and now it's insane to think one sentence wasn't written properly?

So What Happens Now?

If it really was a simple mistake, it could prove a costly one, however cynically the law's conservative opponents may be toying with people's health care access to provoke this situation. According to CNBC, the ruling means that billions of dollars in subsidies, which helped about five million Americans get covered, are now illegal.

You can be sure the Obama administration will appeal the ruling. But, for the time being, this is an indisputable victory for the people who'd like to tear Obamacare apart any way they can.