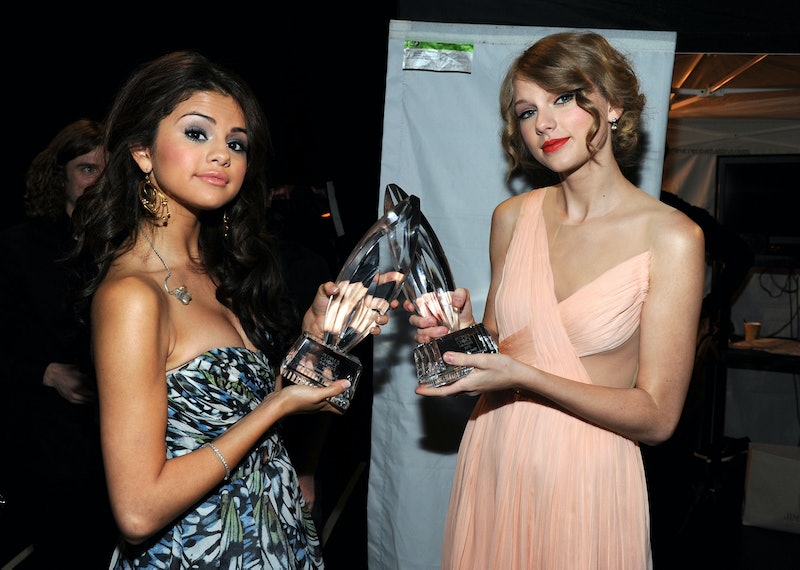 As Girls (or Lena Dunham) so eloquently put it, "A friendship between college girls is grander and more dramatic than any romance." But it works for super famous, Hollywood college-aged girls, too. This is certainly true in the case of Selena Gomez and Taylor Swift who have had a friendship saga for the ages even though neither of them have even reached age 25 yet. Their rocky relationship is especially interesting when you consider the fact that Swift has approximately 2 million other best friends. I guess she can't help it if she's popular.

Perhaps it's because the two are solidified celebrity "good girls" who in spite of their sometimes questionable romantic endeavors, have always proven to be sweet, genuine, and above the Lindsay Lohan-type party scene that keeps bring them back together. Or maybe it's something more primal, like their common love for junk food, embarrassing dancing, and movie binges. Either way, it looks like through all of the tough times, these two are still friends. On Tuesday, Taylor Swift even posted a birthday message for Gomez. That must mean they're full-fledged BFFs again, right?

Regardless of why or when they made up, the girls have always been supportive of each other, even when they haven't been on the best of terms. It's a rare thing to see two people in Hollywood truly care of each other even if someone, um... Bieber-ish gets in the way.

Let's take a look at the Gomez-Swift friendship and how it's progressed over the years.

THEY MET AROUND 2007, WHEN BOTH GALS DABBLED IN THE JONAS BROTHERS DATING POOL

Gomez opened up to the Herald Sun and revealed that she and Swift became fast friends when dating brothers Nick and Joe, when Gomez was merely 15 or 16 years old. "She was great to me," Gomez explained and she backed up that compliment with some aww-worthy facts. Like the way Swift didn't think twice about flying across the country just to check up on her younger bestie.

THEY MAINTAINED AN AWESOME & AMICABLE RELATIONSHIP FOR YEARS

They were award show seat mates and dance partners.

Swift had Gomez come out and duet with her to "Who Says," at her final Speak Now Tour show in the US.

And when they both won 2011 People's Choice awards, they took an adorable photo together. Obviously, friends who win awards together, stay together.

AND THEN THE BIEBS HAPPENED

WHICH WAS COOL WITH SWIFT AT FIRST

She invited him to sing on stage with her at a concert. He punk'd her. They were the three amigos.

AND BY 2013, SWIFT WOULD'VE RATHER HAVE BROKEN BIEBER'S FACE

Headlines popped up that the once-BFFs were on the outs all due to a little blonde Canadian with golden pipes. But it didn't seem fathomable because Gomez and Swift had always been so close.

THANKFULLY, GOMEZ CAME TO HER SENSES AND THE PALS MADE UP SOON AFTER

It was reported that Gomez had chosen Swift over Bieber in the little feud and that sounds like a solid decision if I've ever heard one.

BUT IN 2014 GOMEZ FELL BACK INTO BIEBER'S ARMS AGAIN WHICH DISPLEASED SWIFT... AGAIN

There was talk of another rift between the two friends due to Gomez's relationship status. It's hard to blame Swift if she really was annoyed at Bieber. He so clearly was headed down the wrong track and did so in such a public way.

AT THE 2014 MET BALL THE GIRLS REUNITED

And Gomez made sure to post a video of herself and her longtime friend on Instagram so that everyone would know they were just fine.

AND AS OF JULY 22, GOMEZ'S 22ND BIRTHDAY, THE GIRLS STILL SEEM TO BE ON GOOD TERMS

Swift posted this adorable message for her bestie's birthday. S is indeed for Selena.

Now we just have to hope they don't repeat the whole thing over again. This friendship is exhausting enough as it is.