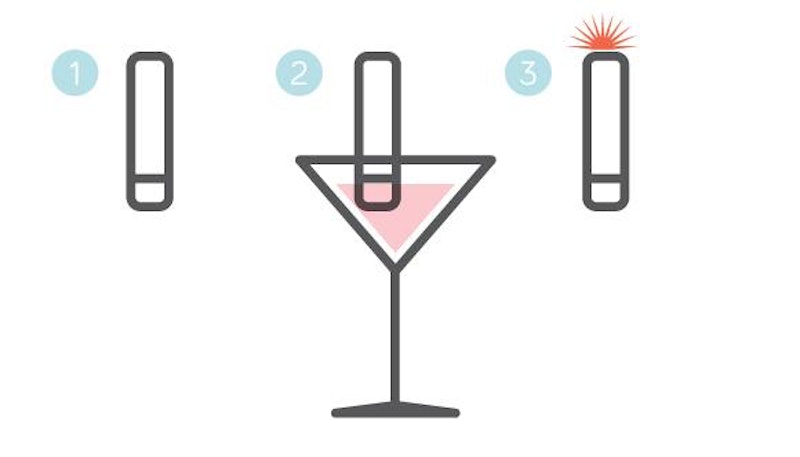 In the U.S., someone is a victim of sexual assault every two minutes, and roughly one out of four women between her late teens and early twenties will become a victim of date rape, or attempted date rape. Which is why a team of Canadian developers are utilizing technology used by the Drug Enforcement Administration to develop pd.id, a small personal drink ID that's the size of a thumb drive or lighter, which will quickly, discreetly inform you if there's more in that glass than your favorite drink.

No, it's not the first device of its kind, but it's one of the better options. When you need to put your mind at ease, you can simply dip the device into your drink. Sensors in the pd.id will test the beverage temperature, light spectrum and conductivity. If it's all clear, the green light will illuminate. If your drink is drugged, you'll get the red light.

The device is able to identify many date-rape drugs, including rohypnol and zolpidem. There's even an app that you can access on your Blackberry, Android and iOS smartphone that'll provide more details about what's lurking in your concoction, if anything. Afterwards, no matter what color the light flashed, you can rinse off the battery-powered device, and use it again.

inventor David Wilson and his team are trying to raise money to fund the production of the pd.id so it can be sold for $75 each.

According to the Indiegogo campaign page, which contains information on everything you need to know about pd.id, the goal is to raise at least $100,000 and put the device on the market by April 2015, with plans to raise more money so that the pd.id can eventually provide information on nutritional value of your beverage, and tell you which bars and nightclubs are safe in your area.

On the fundraising page, the inventors write:

In North America, 1 in 4 women will be sexually assaulted in their lifetime. Twenty five percent of those assaults are facilitated by alcohol or compounds known as Date Rape Drugs. Drugging drinks is a global issue that must be stopped and if it can't be, then we must prevent it. ... It's about personal protection, feeling secure, and it's about empowering our daughters, sons, sisters, brothers, spouses, partners, friends, coworkers and ourselves to be safe in an often unsafe world.

The team released a video promoting pd.id. In it, Wilson says, "our intention is to build a better mousetrap. Something that is easy to use and affordable. Something that can empower and ensure men and women of all ages against sexual assault by way of date-rape drugs."

You can help get pd.id on the market by making a donation. The team of developers are also offering various perks where you can purchase your pd.id in advance, become a beta user, get a free pd.id, raise money for pd.id, and even raise enough funds to get a pd.id for every freshman on your college campus. I don't know about you, but I think I'm getting one of these.

More like this
Using Your Pet’s Name As A Password? Here’s Why You Might Want To Change It
By Cristina Sanza
The 10 Best Waterproof Watches For Swimming
By Lauren Moison
The 8 Best Polaroid Cameras For Weddings
By Megan Gray
What Is “Night Luxe?” Breaking Down TikTok’s New Aesthetic
By Courtney Young
Get Even More From Bustle — Sign Up For The Newsletter