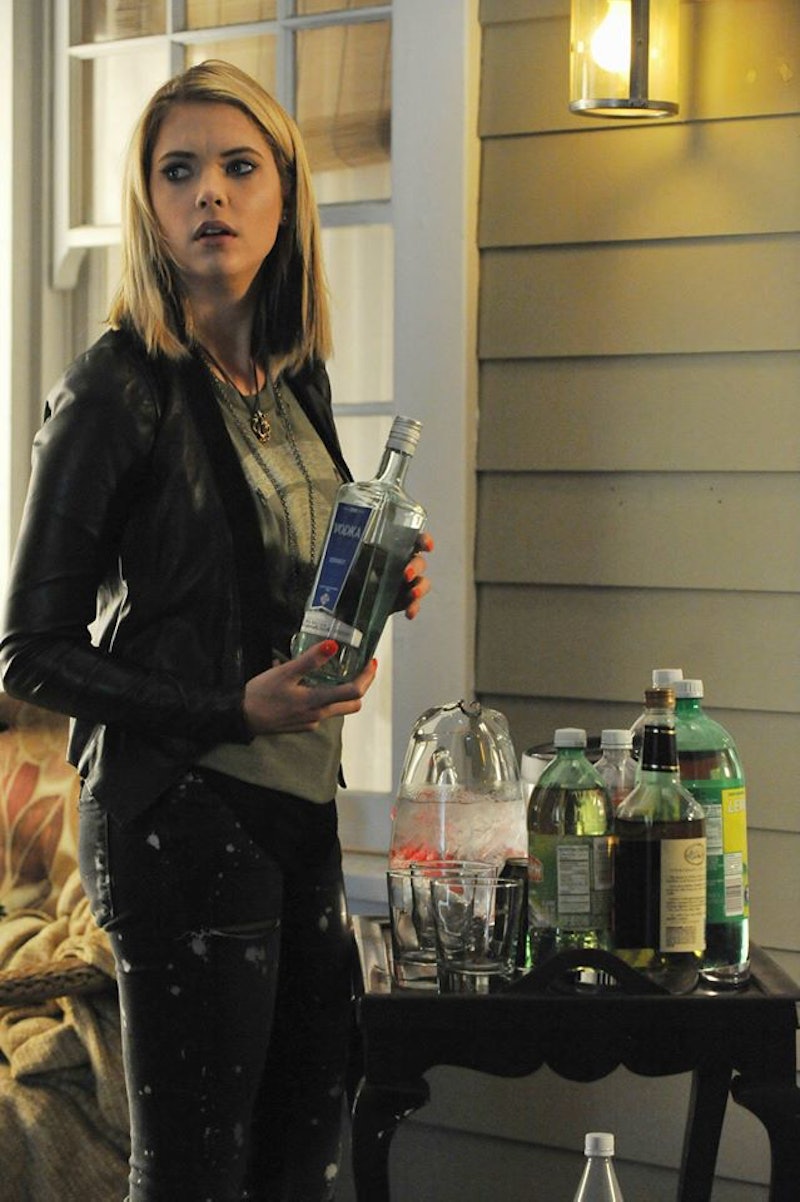 Someone's always listening in Rosewood and everyone would do well to remember that. As Beyoncé would say, Hanna's been drankin' — not necessarily watermelon, but whatever she can get her hands on. Last week, Hanna tried to get Alison out of Rosewood and this week, she got drunk because she can't take Ali's crap anymore and spilled the beans about New York. And, of course, "A" was listening — so do we know who "A" is now ?

Ever since Ali got back to Rosewood and Hanna was mistaken for her at that funeral home, she's been doing her best to be a new, darker version of herself. And this new Hanna loves her booze, apparently. When Caleb got back to town, Hanna got black-out wasted at Lucas party and last week she and Caleb cracked a few beers and commiserated about how difficult their lives are. And, well, it was only a matter of time before she let something slip.

On Monday night, Emily guilted Hanna into coming to the dinner Mrs. Fields was hosting for Ali and she made the best of it — with a lot of vodka. This week's new episode, "The Silence of E. Lamb," started out with Hanna taking shots at Alison for forcing them to live in fear because of her lies. So, naturally, she showed up to Emily's with one thing on her mind — calling Ali out for her bullshit. And after a few side-eyed comments, Emily caught her drinking a full glass of vodka and she kicked her out. Cheers, bitch.

Drunk Hanna ended up at The Brew where she spilled the beans to none other than Emily's new swim BFF (that also chills with Jenna), Sydney. She drunkenly revealed that "everything that happened in New York," stood between the liars and Jenna calling a truce. And, well, this is why we don't drink in Rosewood. Immediately following their little meeting, Aria, Spencer, and Emily got a text from "A" about Hanna's "big mouth" spilling Ali's secrets.

So, does this mean Sydney is "A"? Or is she working with "A"? She wasn't at the new A Team's first gathering, but we all know that she's been hanging out with Jenna and Mona for fun. Could we have been wrong about Melissa all along and it's really this seemingly new girl? Either way, Hanna's got to put down the bottle, unless she plans to escape Ali by dying.