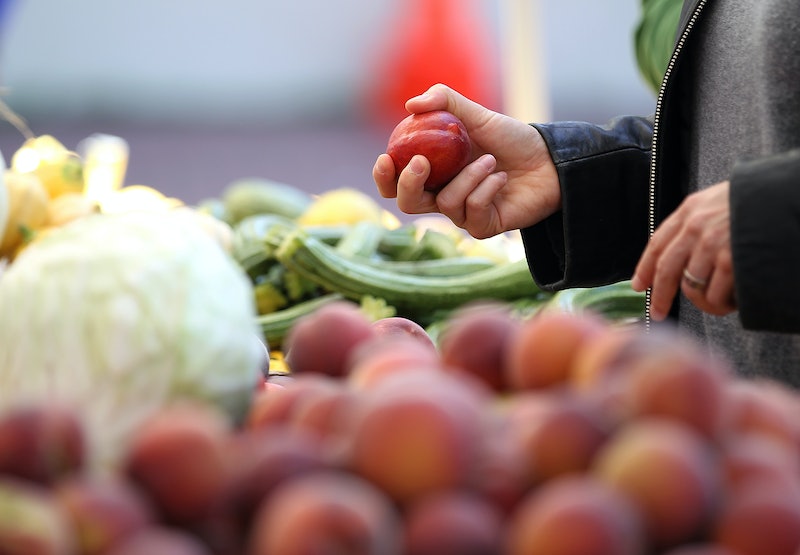 Summer may be the peach season, but after an Australian importer detected low levels of listeria on a few pieces of the fruit, a nationwide stone fruit recall is in effect. If you've recently purchased peaches, plums, nectarines, or pluots from supermarket chains including Costco, Trader Joe's, Kroger or Walmart, you may need to step away from the fruit.

Wawona Packing Co., a Californian company, has issued a recall of stone fruit packed between June 1 and July 12 due to possible listeria contamination. The company was first notified to the potential problem by an Australian importer, who contacted Wawona on July 10 after finding small amounts of the bacteria on three peaches. The levels of listeria were low enough that they would not have caused a problem in Australia, as small amounts of the bacteria — up to 100 colony forming units per gram of food — do not pose a public health risk.

However, guidelines set by the American Food and Drug Administration do not allow any listeria to be present on fruit sold for human consumption. In a statement released by the Californian company, Wawona noted that they "immediately retained a reputable, private laboratory to test both the Wawona Packing physical plant as well as product."

This internal testing revealed another two peaches and one additional nectarine that bore traces of listeria contamination. Following this discovery, Wawona suspended operations and "performed extra cleaning and sanitization measures." Since then, all subsequent tests for listeria have been negative.

Due to Wawona's fast action and the low levels of listeria found on the fruit, no illnesses thus far have been linked to the contamination. "By taking the precautionary step of recalling product, we will minimize even the slightest risk to public health, and that is our priority," said Wawona President Brent Smittcamp in a statement.

The fruit had been distributed to vendors across the United States, and many supermarkets issued their own voluntary recalls of the products. Because it would be virtually impossible to identify every retailer that bought the fruit from Wawona wholesalers, both the packing company and independent sellers thought it best to exercise caution and are advising customers to throw out any fruit in containers marked "Sweet 2 Eat."

Listeria can cause a deadly infection that is particularly dangerous to those with weakened immune systems, including the elderly, the very young, and pregnant women. The Centers for Disease Control and Prevention attributes approximately 1,600 illnesses and 260 deaths to listeriosis every year, and its symptoms include fever, stiff neck, confusion, weakness, vomiting, and diarrhea.

Pregnant women are especially susceptible, even within the at-risk demographics, as they are 20 times more likely to contract listeriosis than other healthy adults. Pregnant women, unfortunately, often misidentify the signs of listeriosis, mistaking it for a mild flu. But if untreated, listeriosis can cause miscarriage, stillbirth, or life-long health problems for the child.

Listeria differs from many other bacteria in its ability to live in cold temperatures, and its growth unhindered in environments like your refrigerator. Generally, the germs are found in processed, refrigerated meats, like hot dogs or other deli meat, as well as raw milk and raw milk products, including certain kinds of cheeses. Its presence in fruit is somewhat rarer, making the Wawona recall rather unique.

While the risk of listeria is greatly reduced by pasteurizing or cooking foods, most fruits are normally enjoyed in their natural form. Perhaps the real lesson here is to always cook your fruit and bake a pie. However, even this is not a foolproof solution, as Wawona has also recalled baked goods that contain or were made with their peaches, nectarines and plums.

A full list of recalled products can be found here, but for now, stay away from Wawona fruit purchased between June 1 and July 20.

More like this
Starbucks' Summer Menu Includes A New Chocolate Cream Cold Brew
By Emma Garza
Michigan’s Governor Is “Going To Fight Like Hell” To Protect Abortion Access
By Andrea Zelinski
If Your Refrigerator Is A Mess, These 25 Organizing Products Can Help
By Courtney Young
Meet The Spice Company Founder Who Sees Chai As A Metaphor
By Madhuri Sathish-Van Atta
Get Even More From Bustle — Sign Up For The Newsletter