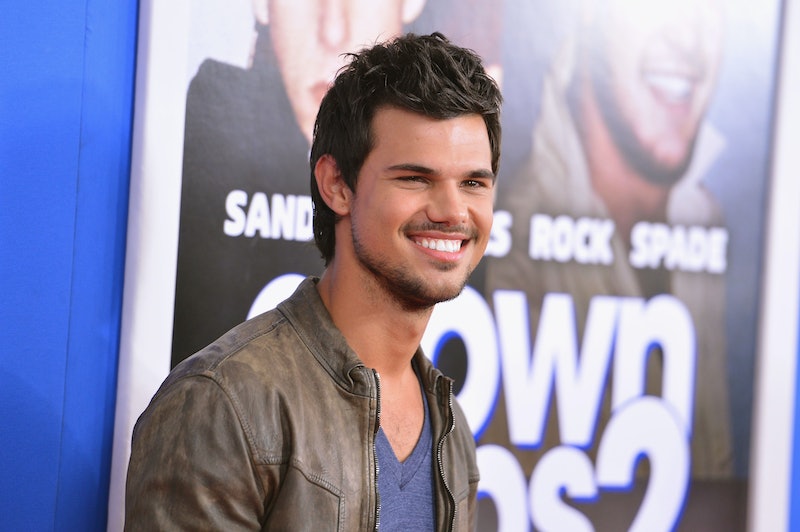 Things are about to get hairy up in here. Taylor Lautner has what Yahoo! calls "the fakest TV beard ever" in the trailer for Cuckoo Series 2. Perhaps this is a shout-out to all of those diehard Twilight Jacob fans who are really into heavy duty facial hair. But not only is Lautner venturing into bearded territory, he's going into comedic territory, too, as he steps into Andy Samberg's shoes in the super popular BBC Three sitcom.

In Series 1, Samberg played a social-norm defying nut job who preferred to be called "Cuckoo," who recently married the more straight-laced Rachel, much to her parent's disappointment. In Series 2, Samberg's character was killed off and his son, Dale (Lautner), who's similarly social-norm defying, must assimilate into society, which proves to be difficult, since he's the sort of dude who thinks dropping your towel on the ground is akin to saying "okay." (So, yes, there's a naked Taylor Lautner. Let your tween heart go wild.)

Lautner's not exactly known for his comic chops (I wouldn't exactly venture so far as to call Valentine's Day a comedic masterpiece, nor would I praise Twilight for its comic ingenuity), but it looks like he has some potential to be moderately funny in this. And if not, well, there's always this beard:

Hey, if pseudo-beards are your thing, then BY ALL MEANS, have at it, my friends.

You can check out the trailer below.