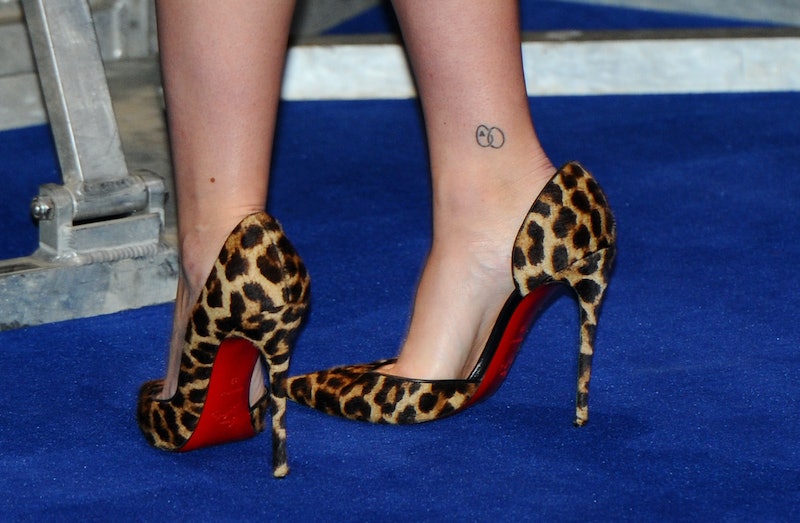 Any fashion lover worth her salt has owned or coveted a pair of Red Soles, aka Louboutin stilettos. Now you can get the look for a fraction of the cost — on your nails. That's right, Christian Louboutin nail polish is coming to a store near you!

If you're familiar with how the famed red soles came to be Louboutin's signature, you'll know that nail polish is a perfect next step for the brand. In his early days as a shoe designer, Louboutin painted the sole of a prototype using a woman's red nail polish, instantly brightening up the shoe and creating a recognizable sartorial stamp. Here's the anecdote, as told by Lauren Collins in The New Yorker:

Louboutin had thought of making a shoe inspired by Andy Warhol’s “Flowers.” The prototype, a pink stacked heel with a cartoonish cloth blossom, had arrived from Italy. “I was very happy, because it was similar to the drawing,” Louboutin recalled, “but the drawing still was stronger and I could not understand why.” Louboutin continued, “There was this big black sole, and then, thank God, there was this girl painting her nails at the time.” Louboutin grabbed the nail polish—it was red—from the assistant and slathered it on the sole of the prototype. “Then it popped,” he recalled, “and I thought, This is the drawing!”

And thus the red sole became Louboutin's design John Hancock. Now he's paying tribute to its origin with Rouge Louboutin, a red nail lacquer available today at Louboutin stores across the U.S. and in a special shop on the eighth floor of New York's Saks Fifth Avenue flagship. The 30 other shades in the line will be available starting August 31st. Each polish costs a cool $50 a pop.

According to WWD, the "month-long lag in distribution rollout between the red polish and the 30 remaining shades is designed to give the Rouge enamel its own time in the merchandising spotlight." The nail polishes mark the beginning of a luxury beauty venture called Christian Louboutin Beaute´ in partnership with Batallure Beauty. I really hope this means we'll see more beauty products from Louboutin — how killer would a red sole-inspired lipstick be?