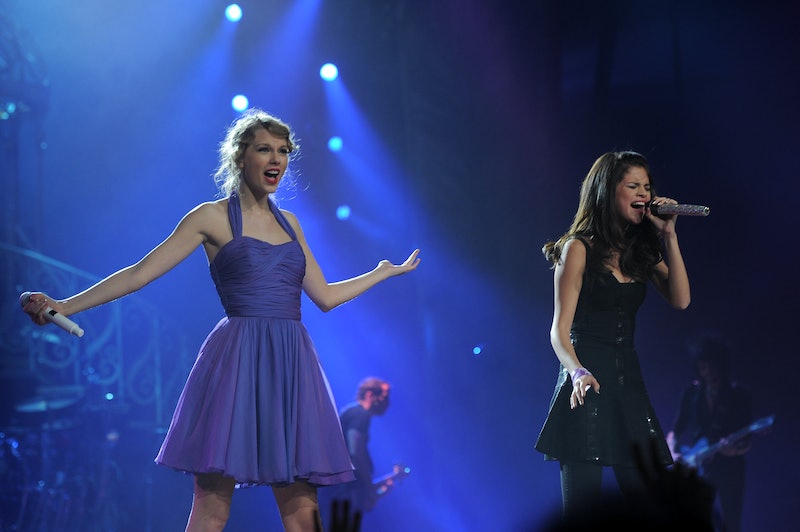 While she didn't reunite with friend and "22" authority, Taylor Swift, to dress up like hipsters or make fun of their exes for her 22nd birthday, Selena Gomez celebrated with model Cara Delevingne in St. Tropez — which, if you think about it, is a very Taylor Swift way to do it. Despite Gomez’s Instagram vid of the former best friends prancing in their couture gowns at the Met Gala earlier this year, we haven’t seen Gomez or Swift together ever since. You know what we have seen? Swift and model Karlie Kloss off gallivanting on hikes, leaving dinners together in NYC, and taking cross country road trips with their twin bob haircuts. Maybe Gomez decided to take a page from Swift and get a fashion model of her very own to bring on adventures. On Monday, Gomez posted a pic of her and Delevingne posing in front of a helicopter.

So does this mean that Gomez and Swift are really kaputz? Swift made 22 an age to celebrate in song literally, so why wouldn’t Gomez want Swift there with her? Rumors earlier this year attributed Gomez’s yo-yoing relationship with baby-faced bad boy Justin Bieber as the culprit. Radar even reported that Gomez called Swift boring — which Instagram pics for Swift’s celebrity riddled July Fourth party could argue.

Either way, they're off on their own adventures with their new supermodel besties by their sides. Like Swift and the Victoria's Secret Angel's road trip in March.

Or Gomez' ongoing birthday bash with Delevingne on the French Riviera.

They're both enjoying summer the best way they know how. Swift's having super coastal one with Kloss.

And Gomez is just sunning with Delevingne.

But the former front row favorites — I miss seeing them dance to musical performances during award shows — don't seem to be on bad terms. Despite replacing each other with a newer (fashion) model, the "Red" singer sent over some birthday love, posting a selfie as she brandished a gold S necklace on Instagram. The caption reads, "Usually this S represents 'Swift' but today I'm wearing it because SELENA IS 22!!!!"