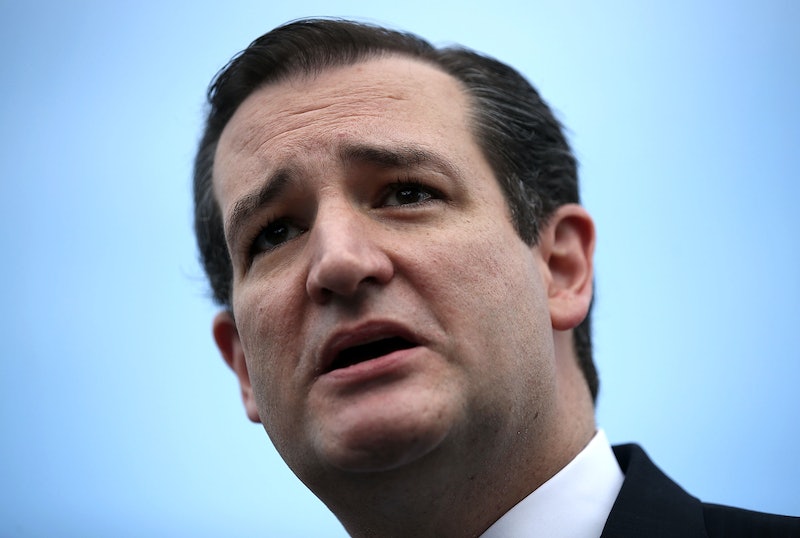 The HBO series True Blood features a lot of scary figures: Vampires, fairies, werewolves, and... Republican senators? In this Sunday's episode of True Blood, the gory and addictive vampire series, they used the name of a Texas senator to mock the party as a whole. Now, Ted Cruz is biting back at True Blood, taking to social media to call the show "misogynist" — and yes, it should be "misogynistic," Ted — and "profanity-ridden."

In the episode, Eric Northman and Pam De Beaufort went undercover to find the woman responsible for releasing a vampire-killing disease. And where did they find her? A Ted Cruz fundraiser, of course. They donned stereotypical oil-rich garb, with big hair and a Stetson hat to mingle amongst Dallas elite at the George W. Bush Presidential Library. De Beaufort frankly summed up her costume as "Republicunt."

Prepping them for their mission, fellow vampire Amber Newlin told Northman and De Beaufort: “Security is going to be tight, and they only invite assholes.”

Northman retorted: “You don’t know us, sweetheart. We can be assholes.”

Soon, the party falls into one million, bloody pieces when it is infiltrated. If you're all caught up, you can watch clips of the scene here. If you're skipping out, here's a brief summary: It is a complete and utter massacre.

Meanwhile, Cruz was none too pleased with having his name attached to the show. He took to Facebook to air his grievances:

Of all the places I never thought to be mentioned, HBO's True Blood vampire show would have to be near the top of the list. Sunday night, they aired a misogynist and profanity-ridden episode where Texas Republicans are murdered attending a "Ted Cruz fundraiser."

Well, I'm sorry to have lost the vampire vote, but am astonished (and amused) that HBO is suggesting that hard-core leftists are blood-sucking fiends....

Alright, well played with the blood-sucking thing. But then on his Twitter feed he managed to further politicize the episode, making a link between the undead and voter fraud, one of the issues that he frequently rails on.

Well. Someone can't take a joke.

The bit was unsurprising for the show. As The Daily Beast points out, True Blood has been unabashedly liberal in its seven seasons. It tackles gay rights and frequently mocks the Christian right. And with its Southern setting it has a wealth of characters at its disposal. Though it didn't use their names directly, Republican presidential candidates Michele Bachmann and Rick Santorum previously inspired an entire True Blood storyline.

So, maybe Cruz won't be tuning in to see how the series wraps up its six-year run. But somehow I think Sookie and the gang will be fine without him.