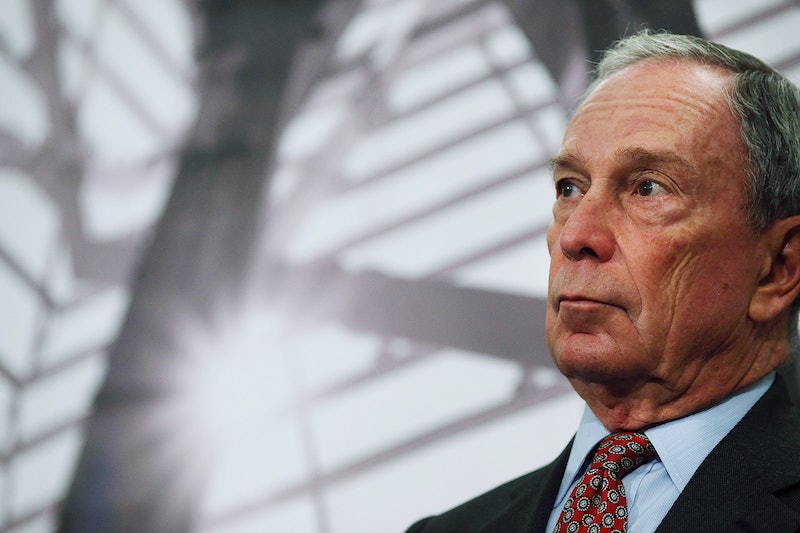 Despite U.S. and European airlines halting flights to Israel after a rocket landed a mile from Ben Gurion International Airport, former New York City Mayor Michael Bloomberg flew to Tel Aviv on Tuesday. Bloomberg, who flew on the Israeli El Al Airlines, released a statement on his website the same day, stating: "This evening I will be flying on El Al to Tel Aviv to show solidarity with the Israeli people and to demonstrate that it is safe to fly in and out of Israel." Shortly afterwards, the FAA extended the U.S. ban on Israel flights another day.

While at John F. Kennedy Airport, Bloomberg downplayed the protest-like stance of his statement, sounding like a spokesperson for Tel Aviv's board of tourism. "I'm not trying to prove anything," he told press. "I'm just trying to show that it’s safe, and a great place to visit."

Bloomberg wrote in his statement, "Ben Gurion is the best protected airport in the world and El Al flights have been regularly flying in and out of it safely."

That was likely not the sentiment when a rocket of unknown origin landed about a mile from Ben Gurion Airport on Tuesday. As a result, the Federal Aviation Administration (FAA) issued a Notice to Airmen (NOTEM) restricting U.S. flights to the airport for 24 hours, and then 24 more. The FAA's decision didn't sit well with Bloomberg, who saw it as more than a safety precaution; he saw it as a message with larger implications.

"The flight restrictions are a mistake that hands Hamas an undeserved victory and should be lifted immediately," his statement continued. "I strongly urge the FAA to reverse course and permit US airlines to fly to Israel."

He reiterated his pro-Israel stance to the reporters at JFK. "Israel has a right to defend its people," he said, "and they’re doing exactly what they should be doing."

This isn't the first time that Bloomberg has expressed his devotion to the people of Israel. The ex-mayor has had a staunch pro-Israel stance throughout his career, and it's one of the defining characteristics of his legacy.

Bloomberg visited Israel in 2007 for a ceremony in honor of his $1.5 million donation to transform the Magen David Adom medical station in Jerusalem. He traveled with his mother, sister, and daughters to dedicate the cornerstone of the MDA station in memory of his father, William H. Bloomberg.

According to the Jerusalem Post, during the same trip, Bloomberg also visited the city of Sderot, where he told reporters, "If [certain organizations] don't renounce terrorism, if they don't agree to abide by previous accords and if they don't recognize Israel, then I personally don't think Israel should speak with them."

The scene in January 2009 was similar to the scene in Israel today. Bloomberg arrived in the midst of air strikes between Israel and Hamas, and at some point even had to duck into a safe room when the public-address system warned of an incoming attack.

"I feel exactly the same way I do when I’m in New York City," he told New York Times reporters as he re-emerged from the safe room. "You are worried about it, you turn to the professionals, and I think what is obvious is that the Israelis are as well trained as the N.Y.P.D."

Bloomberg made the visit to let the Israelis know that he was behind them. "I think I speak for an awful lot, almost all Americans, who think that Israel is doing the right thing in defending itself."

In 2011, Bloomberg returned to Jerusalem to dedicate the renovated William H. Bloomberg Magen David Adom Center, which was named after his father in 2007. He dedicated the building along with Jerusalem's Mayor Nir Barkat, some of Israel's Chief Rabbis, and MDA officials.

The new MDA station was upgraded with new pedestrian walkways, access roads, quarters for crews, a training center and classrooms, offices and meeting rooms, and a new dispatch center.

Before he flew out to Tel Aviv on Tuesday, Bloomberg was in Jerusalem in May to dedicate a new torah scroll to the William H. Bloomberg MDA Center. At the intimate ceremony, he spoke about the man who the building is named after.

"He grew up in a world where he never dreamed he would go to Israel," Bloomberg told the crowd of his father. "For most of his life, Israel didn’t exist. But I’m sure he’s looking down now with a big smile on his face, mainly because this is an organization that saves lives and that’s what it’s all about."