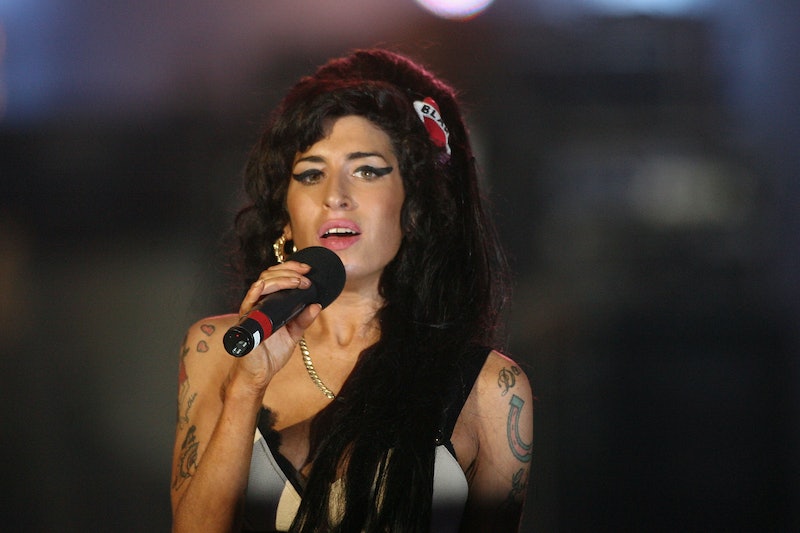 If ever there was a day to play Back to Black on repeat, it's this one — July 23rd, the anniversary of Amy Winehouse's tragic death. Joining the many members of music's lethal "27 Club," the singer succumbed to accidental alcohol poisoning three years ago today, following her oft-documented struggles with addiction. While a number of media outlets thus tended to focus on the more salacious aspects of her personal life, Winehouse will always be remembered first and foremost for her fresh, genre-fusing sound, explosively popular proof that jazz vocals did indeed have a place in pop music.

Though her career was cut short all too soon, with only two studio albums to her name — Frank (2006) and the aforementioned Grammy-winner Back to Black (2008) — Winehouse managed in that brief window to become nothing short of iconic. And to that end, while there may never be another act quite like her, there are certainly a number of current musicians who've taken up her mantle — here, below, are just a few:

It's not hard to see how Winehouse paved the way for Lizzy Grant's reincarnation as Lana Del Rey: the mournful vocals, the '60s sensibility. Sure, Del Rey is a bit more straightforward in her style — a cleaner-cut Bardot rehash, relatively ink- and disaster-free — but her anachronistic lyrics (see: "Video Games") and music video stylings push Winehouse's retro influence to its next logical step, an explicit melange of eras.

Another notable act following Winehouse's popularization of soulful female vocals, Adele was open and frequent admirer of the late singer. Though her songs are relatively substance-free, her relationship woes certainly echo her predecessor's — the tragic tale behind "Someone Like You," for example, running parallel to "Tears Dry on Their Own" or "Back to Black."

And speaking of "Back to Black," even Beyoncé was no stranger to Winehouse's influence — one with her beehive, the other her Beyhive. For Baz Luhrman's Great Gatsby soundtrack, Bey teamed up with Outkast's Andre 3000 to cover the eponymous song from Winehouse's second album, and though the track provoked no small amount of controversy when Winehouse's father, Mitch, voiced his staunch disapproval, it's an interesting effort at the very least — splitting the lyrics between a male and a female voice, laying them syrup-slow over a trap beat, and peppering in the guitar riff from Blondie's "Atomic."

So, here's to Amy and her ongoing legacy, whether through her the undeniable sway of her style or the efforts of the Amy Winehouse Foundation, which focuses on music education and addiction therapy. RIP, ever and on.