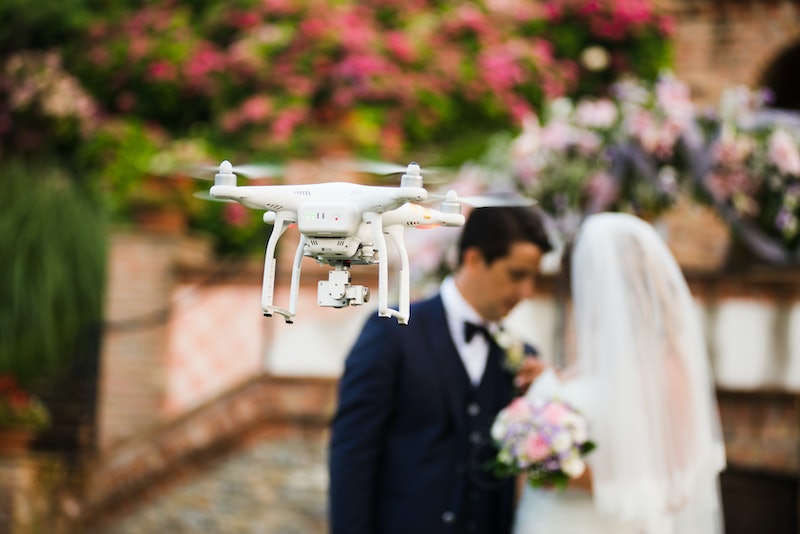 Owner Dale Stierman reportedly came up with the idea to offer the new service after seeing drone-captured shots of real estate properties. He realized that using the drones in his own work would allow him the oppotunity to document weddings in an entirely fresh way. “There are endless possibilities for camera angles that no other photographer can get,” he told The Huffington Post.

That is certainly evidenced by the one-of-a-kind wedding shots he has already taken via drone. One example below, taken from above the Grand River Center in Iowa, near the Mississippi River, shows the bride and groom standing on an outdoor set of steps with their wedding party.

But while the drone photos are certainly distinctive, they don’t come cheap. Stierman charges $300 for a 30-minute drone shoot, which they can conduct anywhere in the United States. Of course, part of the high cost is due to the extensive set-up process each drone shoot requires. In order to make sure things go as expected during the actual photo shoot, Stierman uses two-way radio to communicate with a team that then directs the bride and groom and their wedding party on where to go. Meanwhile, an expert flyer is in charge of controlling the drone.

Whether the photos are worth the money is up to each bride to decide for herself. Personally, I think the drone pictures are cool to look at, but they don’t give me that warm, fuzzy feeling that those close-up wedding snapshots of a joyous couple do. That's just me though! Still, I have to admit that the aboveground perspective is unique and if it's a particular concern for your wedding photos to be different than anyone else's, this method is sure to help make your pictures stand out.