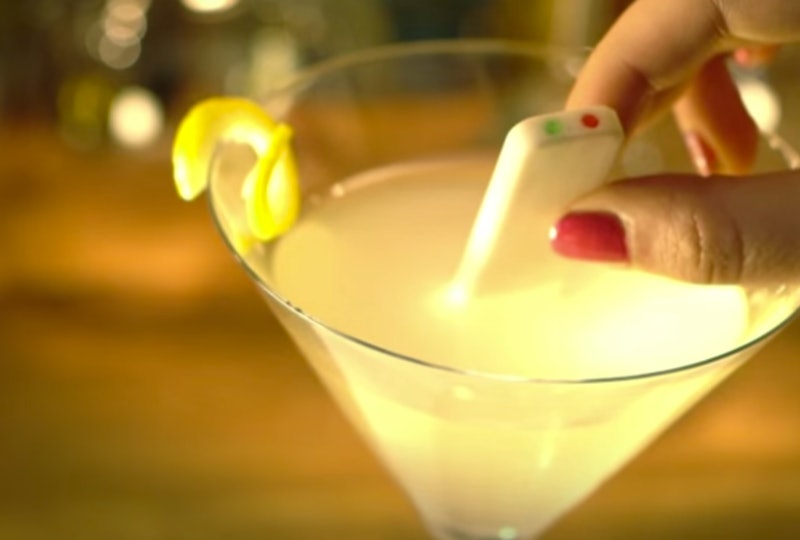 Because every girl has been inundated with "how not to get raped" advice from the time she hits puberty (if not before), we all know how important it is not to let your drink out of sight at a party. But now the wonder of modern technology has created a device called pd.id that can tell you if there are any date rape drugs lurking in your cup. And the company is currently fundraising to put this product into production. Hooray!

The device is called pd.id, short for "personal drink identifier." It isn't the first date rape drug detector to ever hit the market, but it's probably the most advanced yet. According to the company, it's based on the same highly advanced technology used by the DEA, but modified and miniaturized to make it more affordable and easy to use.

To use the pd.id, you just put it in your drink and wait until either the red or green light comes on. The device analyzes the drink and matches it with known drinks in the database to determine what it is and whether or not it contains a date rape drug. Then it gives its owner a green light or a red light, literally. There's also an app that can provide more detailed information and can be used to update the device with new potential drug compounds. The device itself fits easily in the palm of your hand and can be used up to 40 times before it needs to be recharged.

All in all, this thing sounds pretty fantastic, though whether or not people will use it is another story. The device will cost $75, making it a little pricey for college-age women, who are presumably the primary market. And then there's the fact that young women will probably feel awkward using the device in social situations. As Natalie Raschke at the Daily Beast notes, testing a drink might make some women feel uncomfortable or embarrassed, or as though they are accusing the people around them of something, making them more likely to keep the thing their pocket, rather than testing a drink.

Still, these gadgets could very well prevent plenty of assaults and provide even more women with peace of mind. Obviously, the only true way to end date rape is to get guys to stop trying to date rape people, and giving women a way to check their drinks in no way implies that it's remotely OK that we live in a world in which they should have to. Still, since we do live in such a shitty world, it's nice to know that in the mean time there's a way to check if a drink is safe.

The pd.id is currently fundraising on IndieGoGo, and the team hopes to have the devices ready for mass distribution and sales by April of 2015. You can check out their fundraising video below to see the pd.id in action.

More like this
What Mercury Retrograde Spring 2022 Means For Your Sign's Sex Life
By Nina Kahn
How To Use The Crying Filter On Snapchat, TikTok, Instagram & More
By Emma Carey
The True Meaning Behind Each Hand Emoji
By Bustle Editors and Emma Carey
TikTok’s “5-9 Routine” Trend Is Here To Boost Your Productivity
By Courtney Young
Get Even More From Bustle — Sign Up For The Newsletter