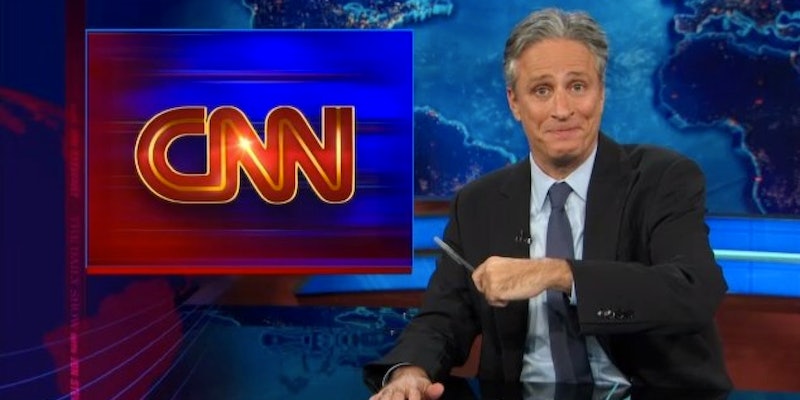 Fresh off the success of some shockingly successful recent Kickstarters, Jon Stewart is launching his own. Sort of. The Daily Show host is launching a $10 billion Kickstarter to buy CNN, but in true Jon Stewart fashion, it's a parody. Stewart's fake campaign is in response to media mogul Rupert Murdoch's very real campaign to buy Time Warner, a purchase that would force Murdoch's 20th Century Fox to sell off Time Warner-owned CNN in order to not break antitrust law. What Stewart wants to do with CNN remains a mystery, but the campaign itself is worth a look.

It's no secret that Stewart has a less-than-favorable opinion of CNN, a network he has both playfully mocked and contemptuously lambasted. And he reiterated his feelings in his Kickstarter description, citing them as the impetus for wanting to buy the network:

CNN, America's first 24-hour cable news network, has been terrible for many, many years. Does it have to be that way? Who knows, maybe it does. So let's find out for ourselves!

That's the spirit! If you think something's that awful, you might as well make it your something awful. The description continues to reveal Stewart's bottom line: If he can't fix CNN, he'll at least use it to make poop jokes. The best part of the campaign? The snazzy rewards offered at every donation level, including getting to host your own CNN anchor Hunger Games-style death match.

Unfortunately, you can't actually donate to the website and get to freestyle with Carol Costello, but I guess you can try to make #LetsBuyCNN happen on Twitter. Of all the weird projects out there, why does this one have to be fake?

Check out all the enticing rewards that nobody will be getting.

Well, if it's between paying $10 and having my face get lost in a sea of people or paying $10,000 and getting some individualized attention, then it's a no-brainer. That's a price jump anyone would be willing to make.

But for only $5,000 more, you get one-on-one time with Carol Costello to talk about whatever you want — climate change, or the escalating tension in Ukraine, or this week's sale at Banana Republic.

We're not advocating drug use, but that's a face that has "EDM raver of the year" written all over it.

For anyone who's ever lost their car keys, which is everyone, you know the frustration. Five million dollars is a small price to pay for peace of mind.

May the odds be ever in Anderson Cooper's favor.

And the top prize is ... we're not really sure what that is, to be honest.

Watch Stewart's announcement of the Kickstarter below.