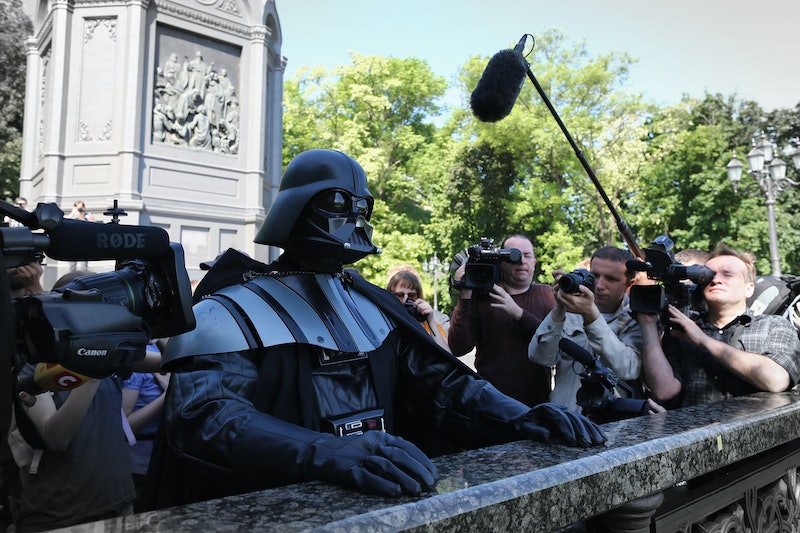 Somewhere, Hillary Clinton's team is biting their nails: Darth Vader is viewed more favorably than all 2016 presidential hopefuls. In a hilarious poll commissioned by FiveThirtyEight, the Empire's preeminent Sith Lord received a favorability rating of 58 percent, outpacing the likes of Clinton, Senator Rand Paul, Rep. Paul Ryan, and Gov. Chris Christie. Although, in fairness, he blew away President Obama as well.

It's all in fun, obviously. It's a pretty big leap to suppose that a favorable opinion of a Star Wars character carries the same weight as an answer about a real-world politician. But it's pretty hilarious all the same! Here are some takeaways you can bank on for 2016, as detailed by The Washington Post:

See how statesmanlike he look throwing out the first pitch? And that arm action — he's a real natural! The Washington Nationals could see that for Opening Day 2017, if the voters are so willing — though it'll be a tough road unless Vader figures out a convincing answer to the Alderaan question. It's sort of like his Bridgegate.

At the end of FiveThirtyEight's post on these tongue-in-cheek numbers, however, they tackled a question which simply must be mentioned: Who shot first, Han or Greedo?

There you have it! Proof positive, unless you take George Lucas' weird, defensive explanation for it — Han Solo doesn't sit around waiting to get lasered, he's does the lasering first.

With a penchant for preemptive strikes, and with a favorability rating of 92 percent, he could be just the savior the neoconservative movement is looking for.

More like this
Photos Of Boris Johnson Drinking At A Downing Street Lockdown Party Have Surfaced
By Bustle UK
10 Times Diana & Meghan Spoke Similarly On The Royal Family
By Sophie McEvoy
How The City Healed Five Years On From The Manchester Arena Attack
By Ella Glover
The 'Thor: Love and Thunder' Trailer Finally Shows Christian Bale As Villain Gorr
By Grace Wehniainen
Get Even More From Bustle — Sign Up For The Newsletter