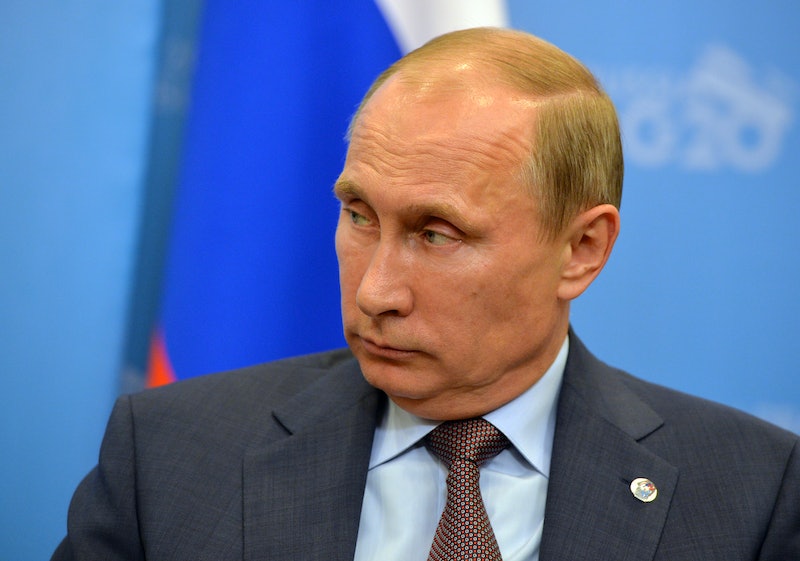 After the deadly crash of Malaysia Airlines flight MH17, anti-Russian sentiment continues to brew in the Netherlands — and that anger is now being directed at one of Putin's daughters. On Wednesday, Pieter Broertjes, the mayor of Dutch city Hilversum, went on a radio show to say Putin's daughter Maria should be deported. Apparently, Maria lives in the town of Voorschoten with her Dutch boyfriend. But, seriously — while the nationwide frustration in the aftermath of the crash is more than understandable, directing it at Putin's daughter is not the answer.

On July 17, MH17 — a passenger plane carrying 298 people, 193 of which were Dutch — crashed in eastern Ukraine. It's believed to have been shot down by pro-Russia separatists in an area controlled by the rebels. Though Putin has promised Dutch Prime Minister Mark Rutte his cooperation in retrieving the bodies and black boxes, there has been mounting evidence that the missile used to shoot down MH17 was provided by Russia.

During an appearance on Meet the Press, U.S. Secretary of State John Kerry said: "It's pretty clear that this is a system that was transferred from Russia in the hands of separatists."

So, it's hardly surprising that the Dutch people will turn to Putin and Russia when looking for someone to blame. But what does any of this have to do with Maria Putin? Absolutely nothing.

While little is known about the 29-year-old Maria and her younger sister, Yekaterina, who have been shielded from the media since they were children, this much is certain: They have zero involvement with the political conflicts raging between Ukraine and Russia. Just because Maria is related to a man whom many consider to be a dictator, does not necessarily mean she shares his beliefs, and it certainly doesn't mean she's implicated in his affairs.

Broertjes later apologized for his comments on Twitter, saying that "they stemmed from a feeling of helplessness that many will recognize."

One group who seem to recognize the the feeling of helplessness are Ukrainians residing in the Netherlands. According to De Telegraaf newspaper, a group of Ukrainians gathered outside the apartment complex where Maria is said to live and staged a peaceful protest. Which is a bit like harassing Sasha Obama on her way to school about the veterans' scandal.

Meanwhile, a plane carrying the first 50 deceased passengers of MH17 arrived at Eindhoven airport on Wednesday afternoon. In honor of the bodies' return, the Dutch government declared Wednesday a day of national mourning.